Eintracht Frankfurt didn't win the 2014 2015 German Bundesliga title. In fact, they weren't anywhere close, finishing the campaign in ninth place with a record of 11 wins, 12 draws, and 13 losses. Furthermore, Frankfurt's Eagles haven't won a German top-flight title since 1959, and haven't collected so much as a trophy-be it a Bundesliga title, a DFB Pokal win, or a continental cup victory-in many years. However, this season the football club does have at least one claim to fame, and that's attacking midfielder Alexander Meier who won the Bundesliga Golden Boot 2015 award.

Alexander Meier is 32 years old and has been playing at Eintracht Frankfurt since 2004 2005. He's always been a good player-albeit, a slightly inconsistent one. However, this year, Meier wasn't only the best player wearing the Eintracht Frankfurt home shirt 2014 2015, but arguably one of the best soccer players in all of Germany.

Indeed, Meier ended in the 2014 2015 campaign with 19 goals in the Germain Bundesliga-more than any other player from any other team in the entire division. The 32-year-old midfielder drained his 19 goals in the space of 26 league matches-not quite a goal a game, but pretty close.

In comparison, the standout offensive players from league victors Bayern Munich-Robert Lewandowski and Arjen Robben-netted 17 goals apiece. Fourth place, meanwhile, was another two-way tie, between Wolfsburg's Bas Dost and Borussia Dortmund's Pierre-Emerick Aubameyang, both of whom scored 16 goals throughout the season. Just missing the top five were Franco Di Santo (Werder Bremen) and Thomas Muller (Bayern Munich), each with 13 scores.

The fact that Meier managed to claim the Bundesliga's equivalent of the Golden Boot award is impressive enough, given his age and the fact that he plays for a lower profile football club. It's even more of an accomplishment given the list of players he beat to the top. That trio of Bayern Munich stars in particular is a group of some of world soccer's biggest stars, and more obvious recipients of the Golden Boot award.

Granted, if we were to factor in goals scored outside of the domestic football league, Alexander Meier wouldn't be on the top of the scorer list.

After all, Meier only donned the Eintracht Frankfurt shirt 2014 2015 once for a non-league match. The game in question, an October 10th DFB Pokal home fixture against Borussia Monchengladbach, ended in a 1-2 loss (and tournament elimination) for the Eagles. Meier scored Frankfurt's one and only Pokal goal for the year, bringing his total 2014 2015 tally to 20.

That's a higher overall score tally than Robben (19), Dost (19), and Di Santo (14), but it's lower than Lewandowski (25), Aubameyong (24), and Muller (21). Of course, Alexander Meier got his impressive total in fewer games than any of those big soccer stars, which earns him the status as the German top-flight's most effective offensive player for the 2014 2015 campaign.

So what's next for Alexander Meier? Will the star of the Eintracht Frankfurt home shirt 2014 2015 be back for an 12th season with the Eagles next year? Or will other teams look to steal him away? 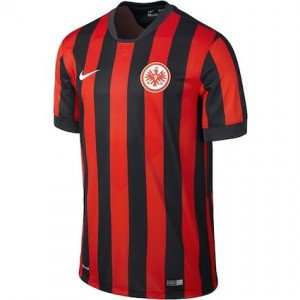 Normally, after a star-making season like the one Meier just enjoyed, high-profile squads both in and outside of Germany would be looking to sign the 32-year-old goal machine. However, nothing about this situation is normal. Players don't tend to have breakout seasons at this stage of their careers: in their 30s and a decade into the tenures at their current clubs.

That should be happy news for fans in the Eintracht Frankfurt home shirt 2014 2015, since it means that there's a good chance Meier could return for a repeat performance in 2015 2015. But does the 32-year-old attacking midfielder deserve better? He's spent most of his career at Eintracht, playing with the Eagles as they bounced between the first and second tiers of German football. Does he deserve a chance to play at a higher-profile club before his soccer career is over? He doesn't even have a picture on Wikipedia right now, for goodness' sake!

Share your thoughts on Alexander Meier the Bundesliga Golden Boot 2015 award winner and his precedent-breaking football season, by following Soccer Box on social media. You can find us online at Facebook, Pinterest and other popular social networks. You can also shop our online store if you're in the market for a new Eintracht Frankfurt home shirt 2014 2015 or away jersey!