The football season may have only just ended in most parts of Europe, and the worldwide soccer community may be focusing the 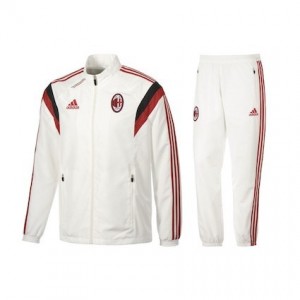 bulk of its attention on the World Cup, but AC Milan is already going back to the drawing board to prepare for the next season of Serie A competition. That much is clear from the new gear that the football club recently released to soccer gear vendors, including several variations of the AC Milan training kit 2014.

One of the new pieces of training and practice gear is the AC Milan white presentation suit 2014 2015, which is now available from the Soccer Box online store. The training uniform is a tracksuit combination of jacket and pants, both of which are manufactured by Adidas. The jacket is white with traditional Adidas striping down the sleeves and across the shoulders. The three red stripes also run down the pants, for a sleek look that will hopefully drive AC Milan to a productive span of practice before next season begins.

It's a good thing that the AC Milan training kit 2014 has given AC Milan players something good looking to wear at practice, because the team's players are going to need to devote a large amount of time to practice sessions this summer if it they going to recover from the recently finished (and nearly disastrous) 2013 2014 season.

To be fair, AC Milan's season could have been considerably worse. The team ended the year with a record of 16 wins, 9 draws, and 13 losses. That was bad enough to leave Milan in eighth place (and well out of qualifying slots for the Champions League or other UEFA events), but good enough to keep Milan well outside of the relegation territory at the bottom of the Serie A table.

Still, the fact that Milan didn't come anywhere close to being relegated doesn't mean that this season was a good one. It also doesn't mean that the team members shouldn't don their AC Milan white presentation suit 2014 2015 and hit the pitch for plentiful practice later this summer, once the few members who got called up for World Cup participation have returned to Italy. With 18 titles in Serie A (the second highest of any team, with 2013 2014 champions Juventus leading the division with 30 wins), the idea of Milan ever being relegated to a lower division is nearly unthinkable, and should stay that way for years to come.

As if the poor performance of the AC Milan team during the 2013 2014 season is not enough to encourage a "back to the drawing board" approach this summer, then the fact that the team has to break in a new coach should certainly do the job.

AC Milan officials have made the decision to sack coach Clarence Seedorf who has only been managing the team since January and to replace him with Filippo Inzaghi, who has recently been coaching the AC Milan youth team. Inzaghi will have his hands full trying to reverse the fortunes of the unraveling AC Milan legacy a legacy that he was once a part of as a player.

Indeed, as Inzaghi urges his players into the AC Milan white presentation suit 2014 2015 and onto the field for some much-needed practice sessions, he will undoubtedly be having flashbacks to his time as a Milan player. From 2001 to 2012, Inzaghi was a striker for the AC Milan team, scoring 126 goals and helping Milan claim two Serie A titles, two Champions League trophies, two UEFA Super Cups, and one FIFA Club World Cup.

Needless to say, Inzaghi is one of the true legacy players of the AC Milan golden age, and could very well be the right man to steer the team back to greatness. Then again, Seedorf was also a noted AC Milan player (at the same time as Inzaghi, no less), and he could not right the ship in a fashion that was satisfactory to team higher-ups.

Do you think Inzaghi has what it takes to push AC Milan to previous heights of hard work, teamwork collaboration, and success? Align yourself with the team today by buying an AC Milan training kit from Soccer Box!