The Senegal national football team tied 1-1 against South Africa on Friday, but the draw was enough to keep the squad in a good position heading into the final games of the 2015 Africa Cup of Nations group 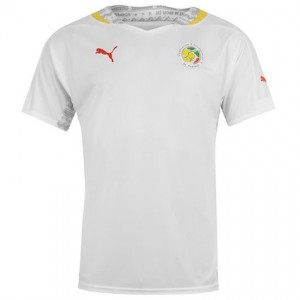 stage. Senegal is competing in Group C for the early stages of the tournament, against Ghana, South Africa, and Algeria. You can root for the Lions of Teranga-or for any country in the group-with a new set of African football shirts at Soccer Box.

The Soccer Box online store is currently stocking shirts for a number of African football squads, just in time for Cup of Nations play. If you are rooting for the Lions of Teranga, you'll love the white Senegal home shirt 2014 2015, or the green and yellow away shirt. Kit manufacturer, Puma designed both shirts. We also have 2014 2015 home shirt and away shirt designs in stock for any of the other football squads in Group C!

The Cup of Nations: Group C

Senegal is currently leading Group C, simply because they are the only one of the four teams that have not yet lost a match. Ghana lost to Senegal, South Africa lost to Algeria, and Algeria lost to Ghana. Still, it's a tenuous lead: Senegal has four points in the group standings while Ghana and Algeria each have three. South Africa is the only team that no longer has a chance of progressing to the knockout phase.

Regardless of which African football shirts you wear and which teams you support, Group C has made for a pretty exciting dose of soccer action. All four countries have at one point or another hosted one of the best teams in African football.

Fans in the Senegal home shirt 2014 2015 are likely remembering the 2002 World Cup, when their national side was the only African soccer squad to make it past the groups. Only eliminated in the quarterfinals, by Turkey, they ended the tournament in seventh place.

Ghana, meanwhile, has won the Africa Cup of Nations on four occasions and has qualified for the last four World Cups, while Algeria made it to the round of 16 at this year's World Cup, and was a consistent contender at the Cup of Nations from 1980 to 1990. South Africa, meanwhile, was the African pride and joy when they hosted the World Cup in 2010.

Needless to say, there are plenty of good options when it comes to choosing which African football shirts to wear during the 2015 Cup of Nations!

The Lions of Teranga have so far acquitted themselves best out of the four soccer teams. In the Ghana match, played on January 19th, Senegal came back from an early point deficit to win. The goal that gave them the win came at the 90+3 minute mark, meaning that the fixture was very nearly declared a draw.

The fixture against South Africa, meanwhile, was declared a draw. Once again, though, the 2014 2015 Senegal squad had to come from behind. After a scoreless first half, South African midfielder Matthew Oupa Manyisa finally put a point on the board at the 47-minute marker.

Luckily for fans in the Senegal home shirt 2014 2015 or away shirt, the Lions of Teranga didn't have to wait long to equalize. Just 13 minutes later, Senegalese defender Serigne Mbodji found the back of the net to make it a tied game. The score stayed at 1-1 until full time.

Will the Lions be able to hold strong today when they put on their home shirts and go up against Algeria? If they can manage a win in that home fixture or even a draw, they will advance to the knockout stages of the most prestigious event in African soccer. And since the country has never won a Cup of Nations title, you can bet their fans are ready to cheer them on.

If you are one of those fans, stop by Soccer Box today and check out our selection of African football shirts! Whether you are looking for a 2014 2015 Senegal home shirt or a set of Algeria home/away shirts, you can find what you are looking for on our site!