The 2014 FIFA World Cup has been one of the most eagerly anticipated and exciting tournaments for many years. 5 African 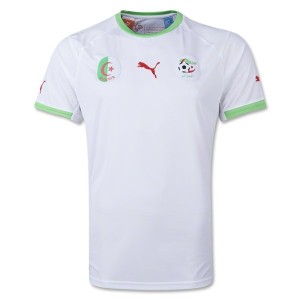 nations qualified for the finals in Brazil; Algeria, Nigeria, Cameroon, Ivory Coast and Ghana. For the 1st time 2 African teams made it out of the group stages, certainly putting on great performances of soccer skill and entertainment. The Algeria football jerseys, and Nigeria soccer shirts were the latest casualties of the knockout stage, but neither side went easily.

Puma is well known for making the soccer kits used in the African Nations football tournaments. As a result Puma has manufactured all of the African team 2014 World Cup kits, except for the Nigeria football shirts that are made by Adidas. The African teams may now be out but you can still show support for these fantastic teams by ordering a shirt from Soccer Box today!

Cameroon, Ivory Coast and Ghana were all knocked out after the group stage but not before putting up a strong fight. Cameroon faced host nation Brazil in Group A, they lost all of their games but managed to score against the mighty Brazilians, a feat to be proud of.

The Ivory Coast also put up a valiant fight in Group C, after beating Japan and losing against group winners Columbia they needed a draw against Greece to proceed and a draw they nearly had. The score was 1-1, until the 93rd minute when Greece scored from the penalty spot sending them into the Last-16 instead.

Ghana was drawn into the Group of Death, Group G. They lost their 1st game 2-1 to the USA, held their own in a strong 2-2 draw against Germany and lost to a desperate Portugal sending both teams home. These 3 teams may be out but they can certainly be proud of their achievements against fierce opponents.

Algeria and Nigeria did do enough to make it to the Last-16. Algeria finished 2nd in Group H behind a strong Belgian team. Nigeria finished 2nd in Group F after putting up a strong fight against Argentina for 1st place. This is the 1st World Cup in, which 2 African teams have succeeded beyond the Group stage. The teams wearing the Nigeria and Algeria football jerseys would face stiff competition for a quarterfinal spot. Neither team could manage a win, but both teams played well and certainly hinted that African football teams are worth watching.

Nigeria was the 1st African team to play in the knockout stage of the 2014 FIFA World Cup. It was a tie between the Nigeria football shirts and those of a strong France team. The match was evenly tied for the first 75 minutes; both teams making chances and possession relatively even.

A 79th minute goal from Pogba put France ahead, this didn't deter the Nigerians who fought harder for the equalizer but it never came. A 92nd minute own goal by Joseph Yobo sealed the fate of the Nigeria football shirts. The match ended 2-0, a valiant effort from Nigeria but it would be France that would be playing in the quarterfinal match on Friday.

For Algeria the stakes were even higher. Their game against Germany was being billed as a grudge match following the 1982 World Cup in which Algeria was sent home because Germany and Austria drew putting both teams through. The game lived up to expectations being one of the most energetic and highly fraught matches of the 2014 World Cup so far.

The Algeria football jerseys may not be making an appearance in the quarterfinals, but many would say the team deserves a place. Algeria played well; they held the German team back but cannot be accused of defensive play. Algeria had a number of good attempts on goal scaring the German team and fans.

The game was fast and furious with neither side getting the space or luck they needed to convert their numerous shots into a goal. After 90 minutes the score was 0-0 meaning 30 minutes of extra-time and the potential of a penalty shoot-out. German player Andre Shurrle netted the 1st goal of the game only 2 minutes into extra-time, on the 120th minute Ozil ensured Germany's passage into the quarterfinals.

The Algerian team wasn't ready to go home without scoring a single goal though, the number 18 Algeria shirt of Abdelmoumene Djabou scored in the 121st minute to make the final score 2-1. Algeria may be going home but they can be proud of their performance against Germany, ranked 3rd in the world by FIFA.

After last nights fantastic display of football skill and determination it is certainly worth picking out an African football shirt ready for the African Cup of Nations 2015. Soccer Box still has stock of the Nigeria and Algeria football jerseys.