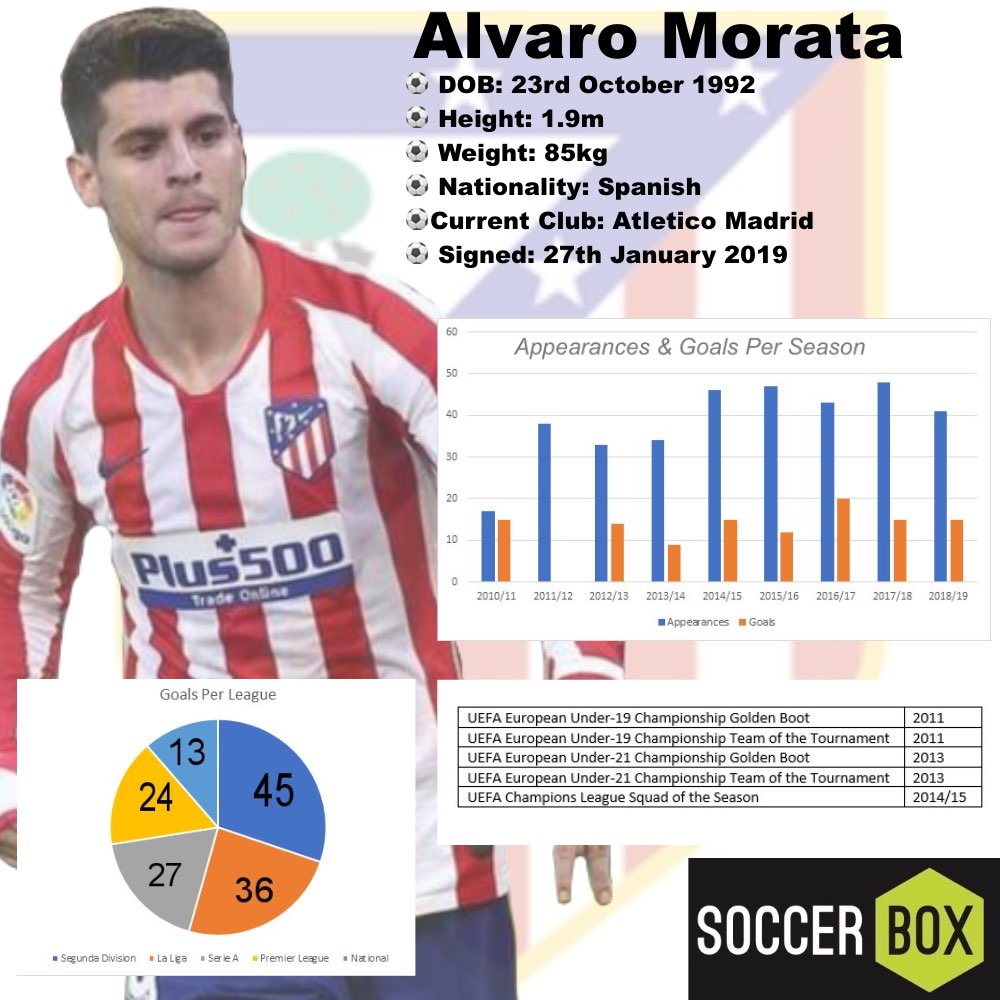 Today we are going to look across the football career of Alvaro Morata. Covering his youth and senior careers for club and national teams. We will also explore the performance of Morata over the years to see how he has progressed between each transfer. Here is a basic profile of Morata, but if you want to find out more about this Striker, then keep on reading:

Alvaro Morata’s first recorded youth team membership was with Atletico Madrid in 2005 when he was an early teen. Atletico Madrid was one of his local teams as he was born in Madrid, Spain on the 23rd October 1992. He played with the Atletico Madrid youth side for only two years before he moved to Getafe. With only a single season under his belt with Getafe, in 2008 Real Madrid purchased him from the club. Although he was playing for the Real Madrid youth team, during his time there as a junior, he also made appearance with Real Madrid C.

In 2010, Morata had a very successful season with the Juvenil A team for Real Madrid. Within the season he managed to win two youth titles as well as hitting the back of the net 34 times. As a result of this, he was moved up to Real Madrid Castilla which was the club’s reserve team, and this is where his senior career started.

His first senior debut was with the Real Madrid reserve team called Castilla in August 2010. This first match he played was against Alcorcon as a friendly game and Morata was the only player to score during the match. Later, that month his first professional debut was during the Segunda Division B and two months after this, he scored his first competitive goal against Alcala.

As Morata was a member of the reserve team, he also gained the opportunity to substitute for the first team. His first debut with the first squad was during a La Liga match against Real Zaragoza in the 88th minute. He was also called up during the Copa del Rey as a substitute in the last few minutes. There was speculation of him gaining a place on the first team after Higuain’s injury in 2011 but Mourinho dispelled these rumors saying that Morata wasn’t ready yet and that he was still learning with the reserve team.

During his first season with the Castilla in February 2011, he scored his first hat-trick against Deportivo de La Coruna B. Despite finishing the season as a joint top scorer with 14 league goals to his name, Castilla did not qualify for the promotion playoffs.

In 2012 Morata continued to receive substitute opportunities with the first team and scored his first competitive goal with Real Madrid after only being on the pitch 60 seconds. He was also added to the official start line during a match against Rayo Vallecano where he scored the opening goal after only three minutes.

After appearing in a match against Barcelona on the 2nd March 2013 and assisting Benzema with the opening goal, Morata was then made a permanent member of the first team. He had a successful year with the Real Madrid first team before there were talks between Juventus and Real Madrid with regards to a transfer. On the 19th July 2014 Morata was purchased by Juventus for 20M euros for five years and the contract included a buy back option for Real Madrid.

Alvaro made his first debut for Juventus on the 13th September 2014 when he replaced Llorente during a match against Udinese. He was used as a substitute many times for Juventus and missed out on a portion of the 2015/16 season due to a soleus muscle tear. But soon after he returned to the team, he featured for 85 minutes of the game against Manchester City in the Champions League group stages where he scored the winning goal for Juventus.

On the 10th December 2015, Morata’s contract was extended until 2020 but only a few months into this new contract, Real Madrid exercised their buy-back clause and resigned Morata for 30M Euros. During his time back at Real Madrid he resumed his position as a backup for Benzema so did not get much time on the pitch. Despite this, he still managed to acquire 15 goals across the season.

With only being back with Real Madrid for a single season, on the 19th July 2017 Chelsea expressed their interests in purchasing Morata from Real Madrid. They had reportedly purchased Alvaro from the club for around £60m. Soon after this, Morata passed his medical and started his journey with Chelsea.

His first debut with Chelsea came during the 2017 FA Community Shield where they played Arsenal. He was sent on as a substitute in the 74th minute of the game but due to a miss during the shootout, Arsenal won the draw based on penalties. Coming back from this disappointing performance, on the 17th August he not only scored a goal himself, but he also assisted Luiz in scoring during their Premier League game against Burnley. Not so long after this he also managed to score his first hat-trick for Chelsea securing their 4-0 win against Stoke.

The following season he played with Chelsea he scored the second goal against Arsenal on the 18th August 2018 and he also scored the winning goal in their match against MOL Vidi. As well as this, he also contributed two goals to Chelsea’s match against Crystal Palace which lead them to a 3-1 victory.

On the 27th January 2019 Morata was loaned to Atletico Madrid for 18 months. He had not played for this team for 12 years it was almost like he was returning home as this is the first squad he played for as a youth. He made his first appearance for Atletico Madrid in an away match against Real Betis and scored his first goal during a game with Villareal 21 days later.

After his performance during the 2018/19 season on loan to Atletico Madrid, they decided to make Morata a permanent member of their team. This would officially take place at the end of his contract with Chelsea on the 1st July 2020.

As well as playing for club teams during his youth and senior years, he has also consistently been a part of the Spanish national teams since 2009. He made his first ever national appearance during an U17 World Cup match against Nigeria in 2009. Throughout this tournament he played four matches and scored two goals in total.

He also appeared in the U19s Japan International tournament, as well as being selected to represent Spain in the 2011 UEFA European U19 Championship. While representing his country in Romania, he scored a total of six goals which was not only the highest tally in the competition, but it also led the youth side to a first-place win.

After this he went on to represent his country in the U21 2013 European Championships where he scored the only goal in two matches against Russia and Germany. Ultimately Spain won the tournament and Morata was named the top scorer of the competition.

He made his first senior debut with the Spanish national team during the UEFA Euro 2016 qualifiers where he scored his first senior international goal against Ukraine which subsequently was the only goal achieved by Spain to secure their 1-0 win. Morata also participated in the finals and during the 2018 FIFA World Cup qualifiers, however, was not included in the line-up for the 2018 FIFA World Cup.

Within this part of the blog post we are going to have a look at Morata’s overall performance throughout his senior soccer career. Here is a breakdown of each club he has played with, along with a list of his appearances and goals acquired during them:

Let’s not forget the achievements and awards that were given to Morata over the years. These trophies listed below are those of which were awarded individually to Morata based on his performance on the pitch:

Is Morata and Effective Striker?

In this post we have explored the youth and senior football career of Alvaro Morata. We have taken an in depth look into his performance over the years and tried to locate any trends or stand out seasons for him. What do you think of Morata as a player? Let us know over on our social media pages today. You can also shop the matching Chelsea shirt, Atletico Madrid jersey or Spain kit to Morata by browsing through our online store – Soccer Box.