Will RSC Anderlecht be able to manage their fourth consecutive Belgian Pro League title this year? With just three matches left in the 2014 2015 championship play-offs, the Purple and Whites are still in second place, trailing behind Gent for the leading position. However, with a substantial victory over Club Brugge this weekend, and with a big blowout game against Gent waiting for the final week of the 2014 2015 season, RSC might just have a chance to win Belgium's top-flight football title once more this year. Root for the team today, by picking up a brand new Anderlecht shirt at the Soccer Box store.

Shopping for Anderlecht gear? If so, Soccer Box is the place to be! Not only can you find 2014 2015 shirt designs-like the pink Adidas RSC Anderlecht away jersey 2014 2015-but we also recently got stock in of the brand new 2015 2016 Anderlecht home shirt. Purple with white stripes, the new home jersey design innovates upon the classic RSC look without losing the definitive elements. The 2015 2016 away jersey will surely be in stock soon, as well.

Regardless of which version of the Anderlecht shirt you like best, now is the perfect time to purchase one. Things are getting down to the wire in the 2014 2015 Belgian Pro League. If the Purple and Whites are going to topple Gent in the three weeks of competition that remain, they are going to need help from their fans!

RSC came into this season as three-time consecutive winners of Belgium's Pro League, and as natural frontrunners to win once again. Surprisingly, though, the soccer squad ended up in third place on the division's regular season table.

Indeed, in the 30 games that make up the regular season, Anderlecht won 16, drew nine, and lost five. 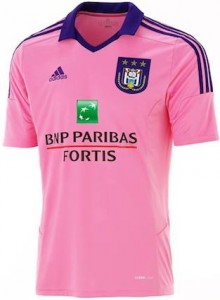 Gent had an identical record, but took second place based on superior goal difference. Club Brugge, meanwhile, finished out at the top of the regular football season, with 17 wins, 10 draws, and just three losses.

In the championship playoffs, though-to which the top six teams from the regular Pro League rankings qualified-the standings have shifted slightly. While the Purples and Whites have struggled in the RSC Anderlecht away jersey 2014 2015-they've lost playoff away games against Standard Liege, Club Brugge, and Gent-they've had good enough luck at home to worm themselves into second place.

With home and away victories against Sporting Charleroi, a 5-1 at-home blowout against Kortrijik, and this past weekend's big triumph over Brugge, RSC Anderlecht are positioning themselves to make a last-minute run at the league title. Help them get there today, by picking up a new Anderlecht shirt from the Soccer Box online store!

Anderlecht's biggest win of the championship playoffs so far, though, came on Sunday, when they faced off against Club Brugge's Blue-Blacks once again. Leading up to the May 10th fixture, the Blue-Blacks were in second place in the playoffs, while the Purple and Whites were in third.

Donning the 2014 2015 home jersey for a match at their own Stade Constant Vanden Stock, RSC finally managed the advantage over Brugge that they've been chasing after all season. With a goal just one minute into the football match-scored by midfielder Andy Najar, and assisted by Steven Defour-the Purple and Whites got off to a great start and never let go of their lead.

The Blue-Blacks did manage to get on the scoreboard-at 67 minutes, with a goal from Lior Refaelov. But two additional scores for the home side-one by Aleksander Mitrovic, the other by Dennis Praet-ensured that Anderlecht won the match 3-1.

Will this big win give the Purple and Whites the momentum they need to dethrone Gent at the top of the Belgium Pro League rankings? We'll find out over the next few weeks. Today,Â the squad will play a home match against Standard Liege; on the 21st, they'll don the RSC Anderlecht away jersey 2014 2015 for an away fixture at Kortrijik; and on the 24th, they'll close out their season in a clash with Gent.

Help RSC win a fourth consecutive Belgium football title, by picking up a new Anderlecht shirt to support the squad. Whether you are looking for a 2014 2015 away shirt, or a 2015 2016 home jersey, we have it in stock! You can also follow us on social media to keep up on the latest football news, or to hear about new jersey releases or shirt discounts. Find Soccer Box online, at LinkedIn or Google + and other popular social networks.