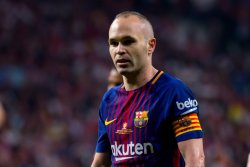 24th June 2016. By Ryan Baldi.
He's not a shouter; he doesn't scream at his colleagues like Roy Keane used to. He's not a gesticulator; he doesn't point and orchestrate his team's positioning as the likes of Bastian Schweinsteiger and John Terry do. But AndrÃ©s Iniesta is a leader.

That might come across as an obvious statement, considering that Iniesta is captain of FC Barcelona, one of the biggest clubs in the world. But the 32-year-old midfielder's leadership style is less than obvious it is subtle, yet ever-present.

It would be an over-simplification to suggest that Iniesta merely leads by example, his influence on those around him stretches far beyond monkey-see-monkey-do. The BarÃ§a midfielder carries an aura which demands deference; he might as well be wearing his vast collection of medals around his neck every time he walks out onto the pitch.

Yet he's unassuming shy, even. He doesn't bang his own drum loudly; he doesn't need to.

The first signs of Iniesta the leader came during the 2006 Champions League final at the Stade de France in Saint-Denis. Frank Rijkaard's Barcelona were heavy favourites to brush aside Arsenal, and an early dismissal for the Gunners' goalkeeper, Jens Lehmann, seemed to seal their fate.

But Arsenal refused to follow the script and took the lead through a 37th minute Sol Campbell header. This was supposed to be the final that belonged to Ronaldinho. The reigning FIFA World Player of the Year had been in imperious form for the past two years, producing other-worldly displays of skill and invention.

However, on this night, under the bright lights and with eyes of the world watching, the brilliant Brazilian played as though he had lead in his boots. BarÃ§a couldn't break Arsenal down.

Rijkaard made three changes in the second-half, two of which have gone down in Champions League lore: Swedish veteran striker Henrik Larsson registered two assists, while full-back Juliano Belletti scored the winning goal with 10 minutes to play.

But it was the half-time introduction of a 22-year-old Iniesta that turned the tide in favour of the Blaugrana.

Iniesta had begun to appear regularly in the BarÃ§a first-team in the 2004-05 season, often as a late substitute replacing Ludovic Giuly on the right-side of the front-three. A standout prodigy from the club's famous La Masia youth academy, Iniesta's name was not unfamiliar to those in and around the Camp Nou as he was being blooded in the first-team.

And by the 2005-06 season, Iniesta had become the regular deputy to Xavi and Deco in the advanced midfield berths.

But, in replacing Edmilson in the Champions League final, Iniesta would be asked to fulfil the unfamiliar role of 'pivote', as it is known in Spain the position which combines the duties of a defensive-midfielder and a deep-lying-playmaker, currently expertly performed by Sergio Busquets.

Throughout the season, the 'pivote' role had been occupied by either Edmilson or Rafael Marquez, two physically imposing players converted from centre-backs; Iniesta was the polar opposite.

But Rijkaard wanted someone who could pick up the ball in deep areas and construct attacking moves; he wanted a player who could get on the ball and make things happen; he wanted Iniesta.

And the 22-year-old did not disappoint. With an assuredness that belied his tender years, Iniesta took responsibility for dragging his side back into the game. He single-handedly gave BarÃ§a a foothold of controlled midfield possession which allowed them to build a sustained second-half offensive laying siege to substitute keeper Manuel Almunia's goal.

Iniesta who sparked Barcelona's revival and became the catalyst for the second European Cup win in the club's history.

In the 10 years that have passed since that night, Iniesta has added six LA Liga titles, two Champions Leagues and four Copa del Reys to his trophy cabinet. He has also been a vital part of Spain's two European Championship winning sides and he scored the winning goal in the 2010 World Cup Final against the Netherlands in South Africa.

At 32-years-old, Iniesta has built a career on not only being Mr. Consistency, but being the man for the big occasions too.

Up until recently, Iniesta's name was inseparable from that of his long-time partner-in-crime, Xavi.

The two men orchestrated an unparalleled decade of success at the Camp Nou, producing mesmerising passing combinations and providing ammunition for Lionel Messi to break goal-scoring record after goal-scoring record. The pair also formed the midfield bedrock upon which the Spanish national team's most glorious era was constructed.

Xavi was the man seen as the embodiment of FC Barcelona, the lifelong CulÃ© who graduated from La Masia to captain his beloved team. Passionate and unafraid to speak his mind, Xavi was the player that the BarÃ§a squad turned to for inspiration and motivation.

With Xavi now out of the picture, the double-act has been broken up. But Iniesta has proven himself to be no shrinking violet.

Having inherited the captain's armband from his good friend and former accomplice, Iniesta is now the man tasked with lifting the team when they are down, with showing his team-mates the path to victory, and with embodying the BarÃ§a way.

Despite being widely regarded as one of the greatest midfielders of his generation, Iniesta is still somewhat underrated. Rather than being considered among the top players in his position over the last few years, Iniesta should instead be talked about as perhaps the finest midfielder of the last three decades.

The diminutive playmaker has every bit as much grace and elegance as the likes of Zinedine Zidane and Michael Laudrup, and perhaps eclipses both in terms of consistency.

As well as being a cultured passer of the highest standard, Iniesta also has the ability to dribble past multiple opponents in a single movement combining the finest qualities of his good friends Xavi and Messi.

He may not have a Ballon d'Or in his trophy cabinet -- that's largely down to the fact that he plays in an era when Messi and Cristiano Ronaldo perpetually draw the eye with their goal-getting exploits. But when the time comes for Iniesta to hang up his boots, he deserves to be remember among the pantheon of the game's all-time greats.