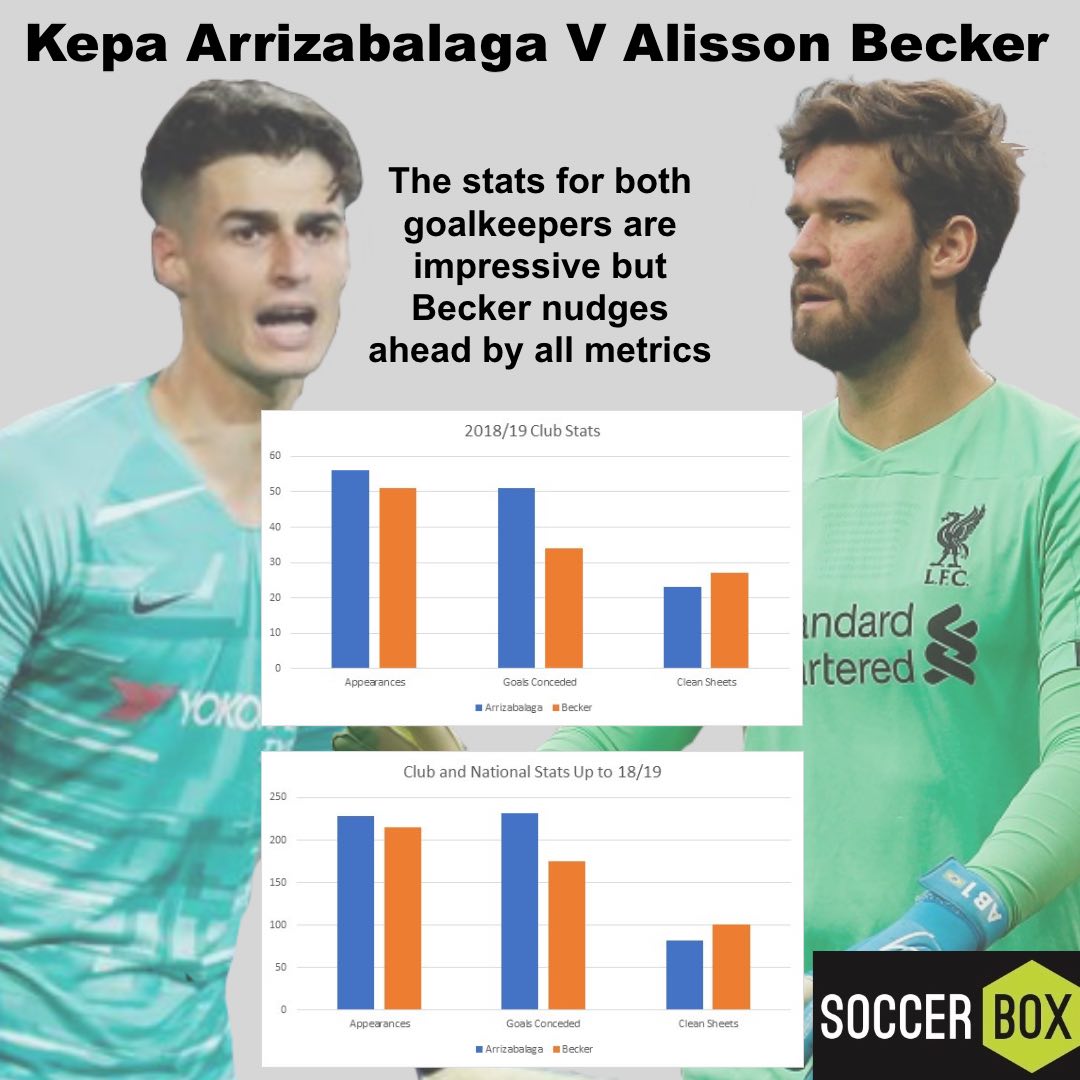 Today we are going to investigate the careers of the most popular Goalkeepers in the Premier League. In this article we are comparing the past season’s performance of both Kepa Arrizabalaga and Alisson Becker. Acknowledging their stats for the 18/19 season as well as an overview of their career on the pitch, if you want to find out more about these top Goalkeepers, then keep on reading.

To being with we are going to look at the 2018/19 performance of Arrizabalaga in the local Premier League tournament where he plays for Chelsea. Here is the breakdown of his overall performance in the previous season:

As we can see above, he has a very impressive rate of saves which total to 82 for the 2018/19 Premier League season. Throughout the season he has also displayed his range of techniques by carrying out several punches, high claims, catches and sweeper clearances. He has also been able to acquire 14 clean sheets out of his 38 appearances for Chelsea during the 2018/19 Premier League tournament. These clean sheets were achieved in matches against: Huddersfield, Bournemouth, West Ham, Southampton, Burnley, Everton, Fulham, Manchester City, Crystal Palace and Brighton.

Although he only made 13 appearances for Chelsea during the tournament, he managed to save 17 goals while only missing 8 which hit the back of the net. Along with this he also managed to secure 7 clean sheets out of the 13 matches he played. These matches in question were against PAOK Salonika, Fehervar, BATE Borisov, Dynamo Kyiv and Slavia Prague.

Out of his 38 matches in the 18/19 Premier League, Becker managed to save 76 goals using a variety of techniques such as punches, high claims, catches and sweeper clearances. We can see that his most effective save was a mix of the punch and sweeper clearance as these were the highest numbers he racked up across the season. He also managed to acquire 21 clean sheets in the 38 matches which were against: West Ham, Crystal Palace, Brighton, Southampton, Manchester City, Huddersfield, Fulham, Watford, Everton, Bournemouth, Wolves, Manchester United and Chelsea.

Above we have investigated Becker’s performance in the English Premier League for 18/19, however now we are going to see how he performed against international clubs from across the globe in the Champions League for that season. Here is the breakdown of how he coped during the tournament:

Despite Liverpool lifting the Champions League trophy for 2018/19, Becker had a disappointing number of conceded goals compared to his appearances. Out of the 13 matches in which he played, 12 goals were conceded, out of the 7 matches in which this happened, they only lost 4 matches. On the other hand, he managed to rack up a total of 6 clean sheets out of 13 matches which were against: Red Star Belgrade, Napoli, Bayern Munich, Porto, Barcelona and Spurs.

How Becker and Arrizabalaga Compare

Above we have analyzed both keeper’s performance during the 2018/19 Premier League season only, but now we are going to look further into their career on the field. We are going to investigate their overall performance as a keeper for their club teams as well as national sides plus a look into their transfers and fees over the years.

To begin with we are going to look at the 18/19 season for Kepa and Alisson. Alisson has made less appearances than Arrizabalaga but was able to have a lower rate of goals conceded and a higher clean sheet total despite Alisson only competing in the Champions League and Premier League compared to Arrizabalaga who appeared in four tournaments during the season.

Next, we have collated their overall club performance in the bullet points above to see how they both compare. We can see that Arrizabalaga has made more appearances than Becker overall, but he has unfortunately a higher goal conceded rate. However, they both have a very similar number of overall clean sheets with only 3 separating them.

Above we have listed the performance of both keepers during their national matches representing their country. As we can see, Arrizabalaga has only appeared a handful of times for Spain compared to Becker who makes a regular appearance for Brazil. As a result of this, Becker has a higher number of clean sheets compared to Arrizabalaga but has a higher level of conceded goals due to the fact he has taken part in almost 4 times as many matches.

Who Do You Think is the Most Effective Goalie?

In this post we have explored the careers of both Arrizabalaga and Becker to see how they both compare. But now we want to know your thoughts on these key players, do you think Arrizabalaga or Becker is the most effective Goalkeeper? Let us know over on our social media pages where you can chat all things soccer. You can also pick up the Chelsea shirts and Liverpool jerseys from our online store – Soccer Box and don the matching top to your favourite Goalkeeper. Stay tuned to find out the updated stats of this post after the 2019/20 has ended