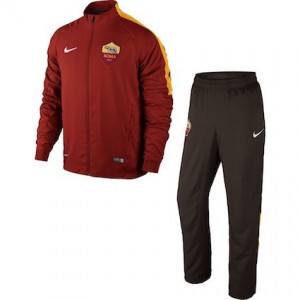 Juventus might be shooting for its fourth consecutive national championship title in Italy's Serie A division, but that club is not alone at the top of the league table. Indeed, while Juventus is currently in the number one slot for the 2014 2015 Serie A season, AS Roma is neck and neck for the lead. Fans can celebrate that fact by checking out the AS Roma training kit or any of the other team gear currently available for purchase at Soccer Box.

Roma fans looking for comfortable training gear need look no further than the Roma sideline tracksuit 2014 2015, a set that includes a zip-up jacket and a pair of sweatpants. For the colder football matches this fall, the tracksuit is perfect. Soccer Box also has stock of the latest AS Roma home and away shirts, both of which will be worn frequently throughout the 2014 2015 season.

AS Roma hasn't won a Serie A title since the 2000 2001 season, but that doesn't mean that the club has been struggling in the 14 years since. On the contrary, AS Roma was more or less a perpetual Serie A runner-up throughout the second half of the last decade.

Last season, Roma returned to that position for the first time since 2009 2010. The season record-of 26 wins, 7 draws, and 5 losses-wasn't nearly as good as the Juventus record of 33-3-2. However, it was still strong enough to put Roma significantly above the rest of the teams in the division.

However, this year Roma is playing like a team that won't be satisfied with second place. Indeed, if you purchase a Roma sideline tracksuit 2014 2015 from Soccer Box today, you will be buying football gear from a team that has been trading blows with Juventus for the top slot in Serie A.

Roma has constructed an undefeated record for the 2014 2015 season, and while the club is admittedly only four matches into the season, that's still something to celebrate.

The strong season began when Roma's players arrived at their home ground of Stadio Olimpico, wearing the AS Roma training kit, and ready to take on Florentina. It wasn't the easiest fixture that Roma could have had for a season-opening match. Florentina came in fourth place on the Serie A division last year, and could have been a threat to Roma.

However, Roma's players were not intimidated by the prospect of facing one of the best football teams in Italy. Instead, they came to play, with midfielder Radja Nainggolan and forward Gervinho scoring a goal each to give Roma a 2-0 win.

The wearers of the Roma sideline tracksuit 2014 2015 have looked every bit as strong since that opening match. Roma beat Empoli, a club newly promoted from Serie B, in a 1-0 away match. Then, Roma won another match at home against Cagliari, all to continue the winning streak.

Collectively, the four matches are impressive for numerous reasons. First of all, not only did the fixtures all end in victories for Roma, but they also featured seven goals that were all scored by different players. Many great football clubs are defined by their best players, but if Roma is going to contend for the Serie A title, they are going to do it because of their depth. The fact that the club always seems to have someone on the bench in the AS Roma training kit, waiting to come out and help the team toward victory, is an advantage.

The other impressive factor with Roma's current undefeated Serie A record is that the club has held strong on the defensive side of things. Scoring seven goals with seven different scorers is one thing, but having a defensive lineup that can prevent the other team from scoring is arguably an even greater advantage to have.

So far this season, Roma has only conceded a single goal. The goal came in the middle of an away match against Parma, a team that finished just outside of the top five in last year's Serie A.

The goal also dropped Roma at least temporarily into second place for the current season, just behind Juventus. Both clubs have won four matches this year. In addition, both teams have scored seven goals apiece. The only difference in their respective records is that Juventus has thus far allowed zero goals, while Roma has conceded one.

Essentially, though, the two teams are deadlocked, and we can't wait to see them face-off against one another directly. Roma will play Juventus in an away match on October 5.

Think that this could be Roma's year? Support the club with a new AS Roma training kit from Soccer Box!