Australia Football Team Will Be At This Year's World Cup

As kickoff day draws every closer, fans are eagerly awaiting the first sightings of the bright yellow Australia football shirt on the field in Brazil. This year marks the fourth occasion on which the Australian national team will be representing their home country in the FIFA World Cup tournament held in Brazil this year. While the Socceroos have a relatively empty schedule until the World Cup kicks off in June, there is still plenty to enjoy about Australian club football. 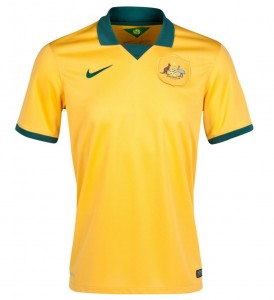 You can purchase your own Australia home jersey 2014 to show your support for the Socceroo's at their fourth ever World Cup appearance. These four time OFC champions rely on the support of their diehard fans to get them through what looks to be one of the toughest World Cup tournaments in recent history. You can find all your favorite Socceroos merchandise on Soccer Box, your one stop shop for all your favorite team and club kit, jerseys and more

The Australian national football team's fans have always been an important part of their preparations for the World Cup. In fact, they are holding a farewell game for their biggest supporters in May, where they'll take on South Africa in a friendly exhibition match to hone their skills before the cup. Fans dressed in the Australia home jersey 2014 will fill ANZ Stadium to capacity on the 26th and give their team the sendoff they need to rock the international pitch in Brazil.

Even celebrities like Perth born singer-songwriter Samantha Jade are fans of the Australian Socceroos. Catch her dressed in a stylish Australia home jersey 2014 at the Soceroos farewell game where she'll perform her brand new single, the official Soceroos anthem; titled "Up!" Jade says she's excited to perform for all of her fellow Soceroos fans and participate in giving her favorite team the sendoff they deserve before such a massive event.

Tickets for the farewell game against South Africa are on sale now, but going fast, so make sure you get yours early before supplies run out. Don't show up to the game without an official team Australia football shirt or scarf from the Soccer Box shop!Â  It's your last chance to show some team spirit before the Australian football squad leaves their outback home to compete in the biggest sporting event of the year.

A Look Back At Australian International Football

With a little less than 90 days left till things kick off in Brazil, it's prime time to take a look at some of the ups and downs of Australian international football. The Socceroos have performed admirably against tough competition, making it to the final rounds of the World Cup, but have never been able to seal the deal and take home the venerated World Cup. Will they learn from mistakes of the past or simply fall victim to tough competition as they have in previous World Cups? Only time will tell.

The first ever international football games the Soceroos competed in were against New Zealand. In a three game tour of The Shaky Isles the Soceroos came up short twice and managed a draw, forever marring the first time Australian players took to the pitch on foreign soil and sparked a tense rivalry between the two countries which continues today after nearly 100 years. The grudge between the two teams has only deepened since then; especially after they both joined the AFC and began playing each other regularly in scheduled league matches.

Australia's other rivals hail from the land of the rising sun. The Japanese national team and the Australian national team are two of the biggest and most well-known teams in the AFC. When they were both drafted into the same group in the 2006 FIFA World Cup, it became apparent that these two Pacific titans would be rivals for a long time to come.