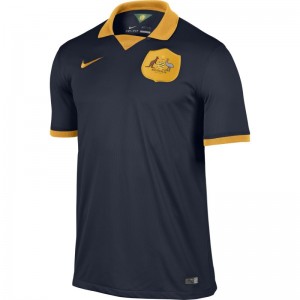 It's a funny piece of trivia that the Australia soccer jersey, worn by the players of the Australia national association football team, looks an awful lot like the corresponding shirts worn by the players from the Brazil national football team. Indeed, both teams wear yellow home jerseys with green trim, and both disparate jerseys are designed and manufactured by Nike. Consequently, the only factor that really differentiates the home shirts from the two teams is the team crests that are embroidered on the breast.

For these reasons and since Brazil is the host country at this year's FIFA World Cup event there is a good chance that Australia fans will be opting for their away shirts for the bulk of the competition, so as not to be confused as Brazil supporters. In fact, the Australia 2014 World Cup away jersey has been selling quite well at Soccer Box; with its navy coloring and yellow trim presenting a nice differentiation from Brazil's 2014 away match kits (which have no trim and are just bright blue in color).

Regardless of the similarity between the Australia soccer jersey and the Brazil home kit, fans of the Australia national association football team will certainly not let there be any question of which nation they are rooting for. On the contrary, with Australia fighting for its highest finish ever (and Brazil gunning for a sixth World Cup victory), the fans of the two teams will be making their presence known in different ways (and at different matches) throughout the tournament.

The Australian national association football team has not traditionally been known as a contender in FIFA events. Australia generally maintains its own set of football rules for club play (hence the "association" designation in its national team name), meaning that many of the team's players don't have as much practice with association play as world-renowned teams like Brazil do.

Still, despite all of this, fans will be wearing the Australia 2014 World Cup away jersey this year in hopes that their team can subvert expectations and make it at least as far as the quarterfinals if not all the way to the winner's circle.

The nation's best finish in a World Cup tournament came in 2006, when the team made it past the group stage for a berth in the stage of 16 teams. Australia was ultimately defeated and knocked out of championship contention in a close 0-1 match against Italy, but the finish still rang as a victory for Australia fans and team members alike: it was the first time since 1974 that the team had even qualified for the World Cup, let alone made it beyond the difficult group stage.

In 2010, Australia managed to qualify for the World Cup once more, and despite failing to proceed beyond the group stage, the qualification alone marked the team as a national football force worth watching again.

With a third straight World Cup qualification, the Australian national association football team has given its fans reason to wear the Australia 2014 World Cup away jersey as a badge of honor. However, before that shirt can become a symbol of hope for the nation's strongest-ever World Cup finish, the Australia team will need to get past a contentious group stage.

Indeed, the wearers of the Australia soccer jersey have been drawn into arguably the most difficult group in this year's World Cup. As competitors in Group D, which also includes the 2010 winners and runners up Spain and The Netherlands, respectively many are not giving Australia or Chile (the fourth team in the group) so much as a second thought.

In order for the Australian team to make it back to the round of 16, it will have to deliver some fierce upsets. Of the four teams, Australia is the lowest-ranked by FIFA, meaning that it isn't expected to win any games. If Australia can somehow topple Spain or The Netherlands, however or, for that matter, both it is likely that all soccer prognosticators on the planet will start talking about the team as dark horse competitors for the title.

Think Australia has a shot? Head to Soccer Box today to show off your pride and pick up an Australia soccer jersey