Bayern Munich's six win, one loss run in the group stage of the 2014 2015 UEFA Champions League wasn't the best of any team, although it was close. After all, reigning victors Real Madrid managed to 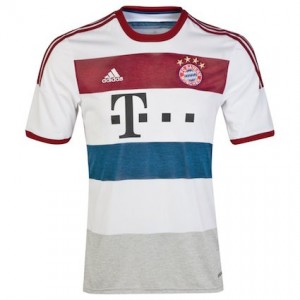 remain undefeated in the six matches played so far in the event. However, with the fixtures announced for the round of 16, it looks as if no squad has an easier way forward than the Bavarians. Cheer them on as they head into the knockout phase, and visit Soccer Box's Bayern Munich shop today.

The Bayern Soccer Box shop has a slew of different items that fans of the top German squad will love. Whether you are looking for a red, white, and blue home jersey or a white and grey Bayern Munich away jersey 2014 2015, Soccer Box is the right place to find it. Our Munich shop also includes kids kits, a few training jersey or jacket options, and more! Check it out today.

Last week, when the fixtures were announced for the 2014 2015 UCL round of 16, certain teams saw their chances dwindle, while others saw theirs increase.

For instance, Bundesliga's Schalke 04 landed Real Madrid in the draw: considering Real's undefeated status in the tournament, as well as Schalke's 2-2-2 record in the groups, it looks like the club's run in this year's UEFA event is simply destined to come to an end.

On the other end of the spectrum is the Arsenal squad, which has been drawn against Bayern Munich in the round of 16 for the last two years. The Bavarians beat Arsenal both times, but this year, Arsenal will face a less consistent and more vulnerable Borussia Dortmund team.

If you are shopping at the Bayern Munich shop and rooting for the Bavarians, meanwhile, your favorite team will also be treated to an easier match-up than usual. Munich's draw for the round of 16 is the Ukraine's Football Club Shakhtar Donetsk.

Not that Shakhtar Donetsk isn't a talented club: they won the Europa League in 2009, and sailed through the groups with only one loss. However, they also came from probably the easiest group in the tournament, qualifying for the knockout phase alongside Portugal's Porto.

Those two football teams-along with Switzerland's Basel-are the only ones left in 2014 2015 UCL contention that did not come from one of the core five European soccer leagues. (The core five are Germany's Bundesliga, Spain's La Liga, England's Premier League, France's Ligue 1, and Italy's Serie A.) And considering the fact that the wearers of the Bayern Munich away jersey 2014 2015 are arguably the best club in football this season, you can bet that they aren't going to be eliminated from the Champions League by a much less prestigious team, from a much less prestigious division.

Need proof that the Bavarians are one of the best soccer clubs of 2014 2015? Preferably before you head off to the Bayern Munich shop to pick up a few away shirts or training jerseys?

Look no further than the club's performance in the 2014 2015 Bundesliga. Not only are they at the top of the division, but they also haven't lost a single game all autumn-at home or away. Their record-of 14 wins and three draws-is better than that of any top flight football squad in England, Spain, France, or Italy.

Furthermore, if the Bayern Munich away jersey 2014 2015 ends up being the garb of a UCL title winning team, it wouldn't be the first time. The Bavarians have claimed the Champions League title five times in the past, including three consecutive wins from 1974 to 1976, a fourth win in 2001, and the most recent victory in 2013.

Is this skilled German club headed back to European cup glory? Only time will tell. They will take on Shakhtar Donetsk in February and March, 2015. The first fixture will be an away game for the Bavarians, while the second will be played at home.

Prepare for both by picking up a new away jersey or home shirt from Soccer Box's Bayern Munich shop.