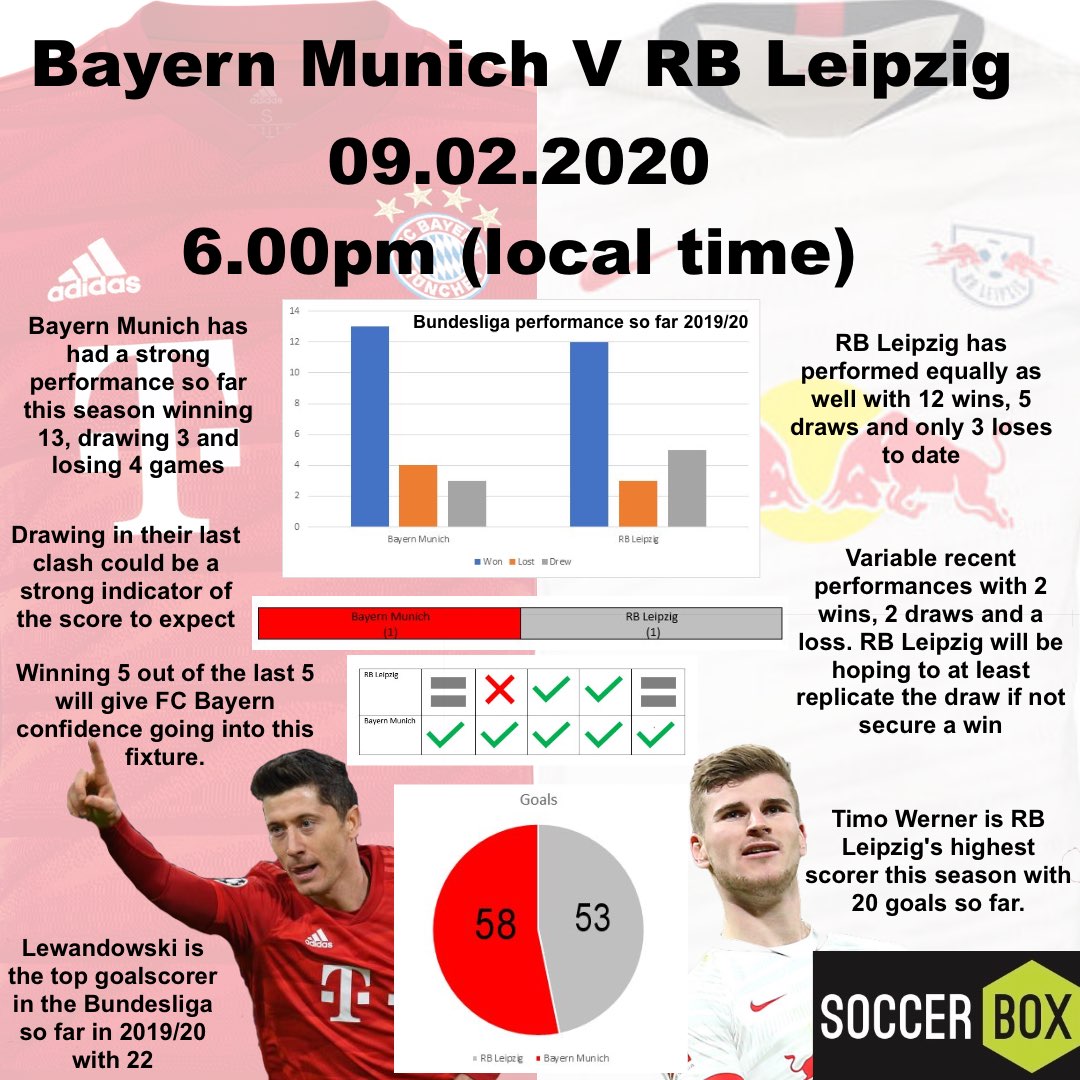 Currently ranked first and second place in the Bundesliga for 2019/20, within this post we are going to look into the upcoming match between Bayern Munich and RB Leipzig. Through the analysis of each sides current and historic performance, we are trying to gauge how the match will pan out this weekend. So, keep reading if you want to find out more about the top two Bundesliga teams at the moment.

To start off with we are going to analyze the performance of the home team as they could be seen to have an advantage this weekend. Within this section of the article we are going to take a look into how the team has been faring in the 2019/20 Bundesliga so far as well as taking notice of their past rankings and achievements in the league. This therefore will allow us to get a better picture on how the club will perform during their next match.

Currently in top spot in the Bundesliga, below we have broken down the results of the last five matches for Bayern Munich this season:

Judging by their past five results we can see that it is apparent that Bayern Munich has done considerably well so far in the league as they have secured a dramatic win in all the five matches listed above. Scoring a maximum of 5 goals and a minimum of 2 out of the past five matches might see their team in great strength when faced with RB Leipzig at the weekend. Plus, with the addition of the Bayern Munich home grounds as the location, supporters and morale will be at large.

Considering Bayern Munich has won all of their past five matches, it is quite interesting to see that overall during the season they have only won 13 of their 20 matches, as well as this they have lost 4 times and drew 3 times. But in these 20 matches their number of goals acquired is quite impressive, coming in at 58 goals so far, Bayern Munich is obviously at great strength this season.

Next, we are going to look into their past performance in the Bundesliga and we have collated a list of their Champions Title wins since they first joined the Bundesliga in 1965/66:

As we can see, Bayern Munich are the current reigning Champions of the Bundesliga and have also won the league consecutively since 2012 which most certainly makes them one to beat. In total they have made first place 28 times out of their 55 seasons in the league and judging by their performance this year, they hope to continue that streak.

Relatively fresh to the Bundesliga, next we are going to look at the performance of RB Leipzig. They have very recently knocked Bayern Munich from the top of the table and are currently in first place for the 2019/20 season. After only joining in 2016/17, they are the second newest club to the league and after seeing their current status in the 19/20 tournament, we can expect big things from this team.

To begin with we are going to see how RB Leipzig has coped so far in the league by analyzing their past five matches from this season. Listed below are the results of the most recent games they have played in the 19/20 Bundesliga:

Currently ranked second in the table, just behind Bayern Munich, Leipzig has only won 1 less match than the squad at the top of the table. Only last week RB Leipzig were in first place with Bayern in second, due to this we can expect these teams to be battling it out for top spot throughout the rest of the season.

Due to this impressive performance in the Bundesliga so far, RB Leipzig are certainly a strong contender against Bayern Munich. They have unfortunately never lifted the Bundesliga trophy, but could this season be the year that it all changes? Here is the list of the finishing place of RB Leipzig across their previous three seasons in the league:

As we can see above, they have done considerably well since their advancement from the lower German football league as they have consistently made top 10 and even top 3 in two cases. Their most recent result saw them take third place in 18/19.

Key Players on Both Sides

In this part of the post we are going to look into the current player profiles for members of each sides 2019/20 squad. Here we will explore their top players in terms of goals and assists to highlight the players we need to look out for during their upcoming fixtures.

Previous Head to Heads and Predictions

Lastly, we are going to investigate the previous encounters between RB Leipzig and Bayern Munich. By looking into their past matches and analyzing their scores, we might be able to get a better picture on what to expect during their match at the weekend. Here is the breakdown of their past five head to heads in the Bundesliga:

In the above breakdown we can see that they have constantly been close with their results. Out of the past five matches, there have been two draws, two wins to Bayern and one for RB Leipzig. Judging by this, it could go either way at the weekend. But going by their last few matches, it has consistently been a draw with Bayern only slightly pulling ahead at the end of 2018/19. As a result of this, we could potentially see their head to head end in another draw.

What Are Your Thoughts?

Within this article we have explored the performance of both RB Leipzig and Bayern Munich in the Bundesliga. Who do you think will be victorious in their upcoming match? Let us know what you think over on our social media pages now. And don’t forget that you can order the Bayern Munich shirts and RB Leipzig jerseys here at Soccer Box and get ready for the upcoming game in style by donning the authentic kit.