Could Argentina's Boca Juniors be on their way to a title in the 2015 Copa Libertadores? It certainly seems possible after the group stage! With two group fixtures still to go, the Juniors have already earned advancement to the next round of South America's most prestigious club football tournament. 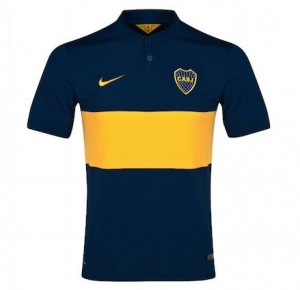 Right now, the Boca store at Soccer Box is pretty sparse. We only have stock remaining of the Boca Juniors home jersey 2014 2015. However, we are proud to carry official Nike gear for this wonderful Argentine football club. Until we get new merchandise in for the team, take the opportunity to grab their blue and yellow home jersey for the 2014 2015 season. The football jersey is currently available for 20% off its original price in our store-a great deal for one of the frontrunners in this year's Copa Libertadores!

The funny thing about Boca Juniors doing so well in the South American tournament is that no one would have considered them as frontrunners at the start of the season. The Blue and Gold had made it to the quarterfinals of the football tournament in 2013, but didn't qualify for the 2014 incarnation.

Luckily, Argentina gets more berths in the Libertadores competition than any other country in South America. This year, the nation has contributed six of the competing football clubs. Of those, Boca were the fourth to qualify-after San Lorenzo (the defending champions), River Plate, and Racing.

Regardless of qualifying order, everyone is happy to have the Blue and Gold in the 2015 Copa tournament now. In fact, so far in the groups, the Juniors are the only soccer squad to have amassed four victories. How's that for a reason to shop at Soccer Box's Boca Juniors store?

Drawn into Group E, the wearers of the Boca Juniors home jersey 2014 2015 have so far faced the Montevidio Wanderers (from Uruguay), Palestino (from Chile), and Zamora CF (from Venezuela). The Blue and Gold have already done enough to secure advancement to the knockout phase, while Zamora has already been eliminated. The other two teams will fight for the other qualification slot.

Not only have the Juniors won each of the four games they've played so far in the 2015 Copa Libertadores group stage, but they've also done so in mostly decisive fashion. The closest of their victories was a February 26th home game against the Montevidio Wanderers, which they won 2-1. That game followed a 2-0 away win over Palestino, and preceded two consecutive beatdowns of Zamora.

The Zamora games were the ones that really gave fans reason to shop at Soccer Box's Boca Juniors store, though. First, in a March 11th home fixture, the Blue and Gold buried the Venezuela squad five points to nothing. Featuring star-making turns from midfielder Marcelo Meli (one goal and two assists) and Italian forward Daniel Osvaldo (two goals), the game singlehandedly made Boca's group stage run, and broke Zamora's.

Just five days later, the Blue and Gold traded the Boca Juniors home jersey 2014 2015 for an away shirt for a rematch. The Zamora squad did slightly better with the home field advantage on their side, and even managed to score a goal. In fact, the Venezuelan football club scored the first goal of the game, at the 18-minute mark, and the only goal in the first half.

By halftime, Boca fans were understandably getting a bit concerned. Could their team really lose this game, after beating the opposing side so decisively just days before? But a dynamite second half-with braces scored by both Juan Manuel Martinez and Andres Chavez-ultimately gave the Juniors a 5-1 triumph.

That leaves the Blue and Gold with 12 points on the Group E standings chart, and a +12 rating in goal difference. The next closest team on the board-the Wanderers, who Boca will play at an April 9th away fixture-has a 7 point score and +1 goal difference.

As you can see, things are going very well for this Argentine football club in the 2015 Copa Libertadores! Celebrate their success with a visit to the Boca Juniors store at Soccer Box.