There was a time in the middle of this season when it looked like Borussia Dortmund, the 2013 2014 Bundesliga runners-up, were going to be relegated out of Germany's top flight football division. Dreadful performances throughout the first half of the 2014 2015 campaign-including a five-week losing streak that lasted from the end of September to early November-left the Black and Yellows looking weaker than they had in decades. In January, with the first match of the New Year, the club scraped the bottom of the barrel, falling to last place in the Bundesliga division. Needless to say, it wasn't a proud time to be a fan in the BVB shirt.

Luckily, things have turned around for BVB. This past weekend, with a win against Eintracht Frankfurt, the club even soared to eighth place-higher than they have been ranked since the first month of the 2014 2015 campaign. With four weeks left to play, the question now is about how much ground the Black and Yellows can make up before they run out of road. Can they push into the top five? Can they qualify for the Europa League? These are the questions fans of the football club are pondering.

If you are one of those fans, you will want to support BVB as they push for a stellar closing to a mostly poor season. We can help you with that at Soccer Box, whether you are searching for a home shirt, a Borussia Dortmund away jersey 2014 2015, or a yellow Puma leisure jacket. All of these items are currently available at bargain discount prices, making this the perfect time to splurge on a BVB jersey or two. Don't miss the chance to support your favorite football club on a budget: come to Soccer Box today!

Going into the April 25th match with Eintracht Frankfurt, the Black and Yellows were in 10th place on the 2014 2015 Bundesliga standings table. They'd achieved a solid win the week before-with a home match against SC Paderborn-but were still just hanging on the edge of the top 10.

With a 2-0 shutout victory over Frankfurt's Eagles, though, the wearers of the BVB shirt have finally pushed their way into a comfortable position at eighth place. Now, well out of the red zone, the squad can hopefully play with a little less pressure and start winning games like they used to last season. 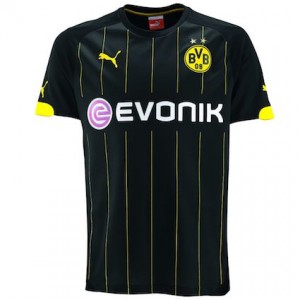 The team in these last two home games has certainly looked like the Borussia Dortmund of old. Last week, they beat Paderborn by three-thanks to second-half goals from Henrikh Mkhitaryan, Pierre-Emerick Aubameyang, and Shinji Kagawa. This week, Aubameyang and Kagawa both stepped up again to give Dortmund an easy win over the Eagles. Goalkeepers Roman Weidenfeller and Mitchell Langerak respectively managed clean sheets in the two games.

If those stats don't make you want to pick up a new Borussia Dortmund away jersey 2014 2015 from Soccer Box, consider this: with the five unanswered goals in those two home games, BVB finally broke even in terms of goal difference. Indeed, right now, the club has a +3 GD score-a fact that alone is keeping them above Werder Bremen on the 2014 2015 Bundesliga table. Both football clubs have 39 points in the standings.

As you can see, fans in the BVB shirt right now have a lot of reason to be optimistic about their club's chances in the league. From eighth place, the soccer squad is just two slots away from Europa League qualification range, and just three slots off the top five.

Unfortunately, the Black and Yellows definitely won't be participating in the Champions League next year. The top four for the 2014 2015 Bundesliga is more or less already set, with Bayern Munich, Wolfsburg, Borussia Monchengladbach, and Bayer Leverkusen occupying those spots. Schalke 04 and Augsburg, though-the clubs in slots five and six-are just three points ahead of Dortmund.

It's Schalke and Augsburg that the Black and Yellows will have in their sights on Saturday, May 2nd when they don the Borussia Dortmund away jersey 2014 2015 to take on Hoffenheim. In addition to that game, only fixtures against Hertha BSC (home, May 9th), Wolfsburg (away, May 16th), and Werder Bremen (home, May 24th) separate BVB from the end of the season.

Grab a new BVB shirt from Soccer Box-be it a home jersey, an away jersey, or some other shirt design-to prepare for those final weeks of play.