The Indomitable Lions from Cameroon will be heading back to the FIFA World Cup this year. Fans of the Cameroon football shirt will be pleased to know that after a long and scary qualifying campaign, their favorite team has managed to secure a spot in this year's games. The 2014 FIFA World Cup offers another exciting chance for fans of this Central African team to see their favorite players on the international stage. 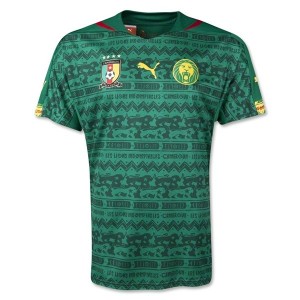 Cameroon's first world cup appearance was back in 1982 when they took to the field in Spain. Now The Indomitable Lions will head to Brazil to participate in the big dance once again this summer, and they'll need the support of all their fans to get the momentum they need to make a stand against the tournament's stiff competition. Show your support with a Cameroon 2014 FIFA World Cup home jersey from Soccer Box and cheer your favorite national team on from the stands!

The players that make up Cameroon's national soccer squad are some of the best in all of Africa. Alongside their new German head coach Volker Finke, these star players went up against tough odds and fierce competition to give their team a chance to compete in this year's World Cup. Coach Finke, the 65 year old grizzled soccer veteran from SC Freiburg had only just got to know his team before their unpredictable qualifying round, but still managed to lead his team to victory and a qualifying spot in this year's games.

Let's take a look at the Cameroon national team captain, Samuel Eto'o. When he's not wearing the Cameroon football shirt, Samuel Eto'o is dressed in blue as one of Chelsea's best Strikers. Though Eto'o may not be as young as some of the other captains participating in this year's World Cup, his experience on the pitch might just come in handy as it has in the past. In his last few games Samuel Eto'o has been tearing up the pitch in a hot streak fans expect will continue into this year's big dance.

Alexandre Song is another high profile player that will be wearing the Cameroon 2014 FIFA World Cup home jersey in Brazil this summer.Â  This strong midfielder has experience playing with some of the best football clubs in the world, including his current club FC Barcelona. His skill combined with Samuel Eto'os experience managed to lead The Indomitable Lions to victory in their qualifying rounds.

A New Leaf for the Indomitable Lions

Though they have managed to qualify for the World Cup seven times, more than any other African team, they have yet to make it farther than the initial group stage since their inaugural appearance in 1990. Those who don't know the team may think that Cameroon doesn't stand a chance in this year's World Cup, especially after their capricious qualifying campaign. Fans of the team are adamant that Cameroon has turned over a new leaf this year; and with all the changes to the team's roster, including a brand new head coach, chances are they're right.

Those watching Cameroon's latest friendly against Portugal may have got a whole different idea of what kind to team Cameroon will turn out to be in Brazil this summer. Head Coach Volker Finke however, isn't worried, explaining to interviewers that they are simply using the friendly matches in the run up to the World Cup as a way to practice new strategies. Fans have no doubt that Coach Finke knows what he's doing, but even a team full of world class players needs time to adjust to working with a new coach.

Cameroon has been drafted into Group A along with Mexico, Croatia and Brazil. Though all three opposing teams in the group present a real challenge, the players wearing the Cameroon 2014 FIFA World Cup home jersey won't go home without a fight, and fans would have it no other way.

It's time to start the countdown to this year's World Cup! You can find all your favorite national team's gear at Soccer Box, including the Cameroon football shirt.