While the Cameroon national football team, Les Lions Indomptables, have only made it out of the group stage at the football World Cup on one occasion, fans are still hopeful to see the team move beyond Group A at this year's tournament in Brazil. However, the players wearing the Cameroon soccer jersey are up against some of the stiffest competition in the Cup, and that isn't going to be easy. 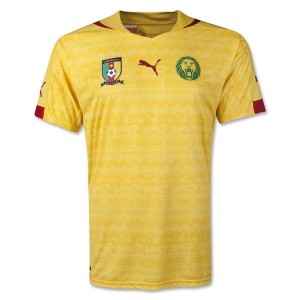 For the Indomitable Lions to move forward, they will have to go up against Mexico, Croatia, and the incredibly skilled Brazilians, who have home field advantage. Still, hope is alive for the Cameroon football team. Even though the team has rarely made it past the group stage in the World Cup, they have qualified for the tournament seven times in total more than any other African team. As a result, many fans are hanging all of Africa's hopes on Cameroon, donning the Cameroon 2014 FIFA World Cup away jersey to cheer the team forward in Brazil. The jersey along with other Cameroon gear is available from the Soccer Box online store.

This year the Cameroon soccer jersey is up to regulations to be worn in the World Cup. However, in the past, there have been some issues with the jersey. Puma, the company that makes the kits for Cameroon made a sleeveless jersey for the team in the 2002 African Cup of Nations. Since the World Cup does not allow sleeveless jerseys, the kits had to be modified for that year's World Cup event.

Uniform issues continued for Cameroon after that 2002 mix-up. At the 2004 African Cup of Nations, Puma designed a one-piece suit for the team to wear, which again resulted in FIFA calling for jersey alterations.

This year, however, the team finally has no controversy and the Cameroon 2014 FIFA World Cup away jersey which is still made by Puma falls well within regulations for tournament play. In other words, fans of the team can buy the jerseys now with no worries that FIFA will call for alterations in the coming weeks and months.

Can the Lions Pull Off a Better Showing?

The Cameroon team only made it past the group stage once, at the 1990 World Cup where they reached the quarterfinals and finished in eighth place. However, looking just at the African stage, Cameroon's record is considerably better.

The team has placed first in four Cup of Nations tournaments, been runners-up twice, and come in third and fourth on one occasion each. They were also gold-medal champions in the 2000 summer Olympics, which means that they certainly have the talent and strength to stand shoulder-to-shoulder alongside the best teams in the world even if they have rarely had the opportunity to show that talent and strength at the World Cup.

Fans hope that this year will be different for the Lions and that the football team will move forward past the initial group stage. To do so, however, Cameroon will have to at least beat out Mexico (ranked at 19) and Croatia (ranked at 20), which will be no easy feat. Cameroon is currently ranked at 50.

If the team can make it past the group, though, they will at least stand a shot at securing their highest finish yet. The last time Cameroon made it out of the first round, they reached the quarterfinals, so it seems as if this team just needs that first initial push of momentum to put up a good showing. Fans will have to wait and see if that momentum will be able to build in Brazil, but by throwing on the Cameroon 2014 FIFA World Cup away jersey, they are at least hoping to help it along.

If Cameroon is going to make it, the Cameroon soccer jersey is going to need to be worn throughout the games in Brazil to show fan support for the team. Soccer Box has jerseys for both home and away games, so stop by the online store and help support the team as they push to hopefully improve their World Cup record.