After eight games we assess the situation and ask Can Poland top Euro 2016 Qualifying Group D? When

Poland beat Germany in an early Euro 2016 qualifying match last October, the White Eagles took an unexpected lead in qualifying Group D. Germany had been the heavy favorites to dominate Group D-and indeed, the entire Euro 2016 tournament-thanks to their recent World Cup victory. But the German side's loss against Poland showed weakness, and gave fans in the Poland home shirt 2014 2015 hope that their soccer squad might be able to pull off an upset and win their qualifying group.

On September 4th, as each team in Group D played their seventh qualifying games for next year's European Championship (of a total 10), Poland finally ceded the lead back to Germany. In a rematch on German home turf, the Polish squad suffered their first loss of the qualifying campaign so far, falling 1-3 in a fiercely competitive fixture. The win put Germany two points ahead of Poland in the group standings-a lead they defended three days later by winning their eighth qualifying game against Scotland.

Games nine and 10 for Group D will be played next month (on October 8th and 11th, respectively), so now is the perfect time to assess the current standings and predict the ultimate outcome of the competition. In addition to Germany and Poland, the group also consists of the Republic of Ireland, Scotland, Georgia, and Gibraltar.

Germany, as mentioned above, are leading the way at the moment, with a record of six wins, one loss, and one draw-good for a point total of 19. Poland, meanwhile, are just two points back, with five wins, two draws, and one loss. Both football teams are expected to qualify for Euro 2016 directly.

Georgia and Gibraltar are at the bottom of the rankings, with six and zero points, respectively. It is a mathematical impossibility for either team to finish in the top three, and both have technically been "eliminated" from contention as a result. They are mere obstacles for the other four soccer squads now.

The Republic of Ireland is the only challenger for a top-two spot. Scotland could feasibly push into third place and qualify for Euro 2016 via the playoffs, but it's unlikely considering that their point total (11) is four points lower than the Republic of Ireland's (15). The Republic of Ireland, meanwhile, could change the dynamics of the group if they manage to beat either Germany or Poland in their last two matches.

Even if Poland can't manage to pass Germany, though, they'll still finish Group D with at least some measure of bragging rights. Germany might be the point leader, but Poland are the goal leader-not just in Group D, but in the entire Euro 2016 qualifying competition.

Indeed, across their first eight qualifiers, Poland scored 29 goals. Robert Lewandowski alone tallied 10 and is the most 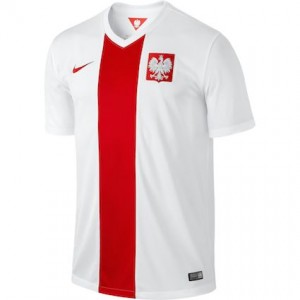 If Poland are going to pass Germany for the top spot in Group D, they are going to do so because of their superior goal difference (which is currently +22, compared to Germany's +15). The German side may have won more games, but the Polish soccer squad have definitely enjoyed bigger victories, including a 7-0 triumph over Gibraltar last September, a 4-0 win against Georgia in November, and a 8-1 home win against Gibraltar (again) just last Monday, September 7th.

Do you think the Polish national football team can surpass Germany for Euro 2016 qualifier bragging rights? How many more goals can Lewandowski score in the final two qualifying games? Is either of these two football teams the eventual 2016 European Champion? Pick up a Poland shirt 2014 2015 or Germany jersey from Soccer Box, and then find us on social media to chat about your predicted answers to the above questions! We are active on multiple networks including Facebook, Pinterest, and Tumblr.