Sporting Lisbon (or Sporting CP, as they are often referred) are undoubtedly one of the three great football clubs in Portugal. They've won 18 national championship titles, and just last season, they clinched the Portuguese Cup, beating SC Braga in a penalty shootout to earn the trophy. Yet, in spite of Sporting's undeniably solid statistics, they haven't actually won a title in Portugal's Premeira Liga since the 2001 2002 season. Can Sporting Lisbon clinch the Premeira Liga in the 2015 - 2016 season, and give the Lions a spot at the top of the podium once more?

Root for Sporting CP today, by picking up a brand new Sporting Lisbon home jersey 2015 2016 from Soccer Box! The jersey, from kit manufacturer Macron, is an attractive green and white polo-style soccer shirt that Lions fans will love. Get yours today at our store!

The Reign of Benfica and Porto

There are really two things separating Sporting Lisbon from returning to the top of the Portuguese Premeira Liga, and they are both rival soccer clubs: Benfica and Porto. These two squads are often synonymous with Portuguese club football, and for good reason. Over the past decade-plus, they've built an unbelievable dynasty of success, perhaps best illustrated by the fact that Sporting CP were the last team other than Benfica or Porto to win the top-flight Portuguese title.

Since the 2002 2003 season, Benfica and Porto have gone back and forth as the Premeira Liga victors. Benfica topped the standings table for both of the last two seasons, while Porto won seven titles in the span of eight seasons, from 2006 to 2013. Needless to say, it's tough for any other football club to even get close to the title, just because these two squads are so consistently stacked.

With all of that said, it's become fairly clear over the past few years that if anyone is going to break the 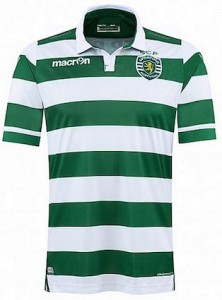 stranglehold that Benfica and Porto have on Portuguese soccer, it's going to be Sporting Lisbon.

Since last winning the Premeira Liga title in 2002, the Lions have had a number of "close calls" for the title. In fact, they've been the league's runners-up five times in the last 10 years. Four years in a row, from 2006 to 2009, they settled for second place. The football club's fifth runner-up placement was more recent, occurring during the 2013 2014. That, combined with Sporting's recent triumph in the Portuguese Cup, could be evidence that the team has what it takes to surge back to the top.

Some of the runner-up years were closer for Sporting CP than others. In 2006 2007, for instance, the Lions finished the season with 68 points-just one point behind the league-winning Porto. The next year, though, Porto won the league with 69 points, and Lisbon were second with 55.

Lisbon's 2013 2014 season split the difference between those two extremes. With a record of 20 wins, seven draws, and three losses, Lisbon finished the year with 67 points. Benfica's record was better, with 23 wins, five draws, and two losses, for a total of 73 points. Still, it was a great season for the Lions, and gives plenty of reason to believe that Sporting Lisbon are going to finally top the table again one of these years.

Actually, if Sporting Lisbon had played as well in 2013 2014 as they did the following season, they would have topped the table. In 2014 2015, the Lions won 22 games, drew 10, and lost only two, finishing the year with 76 points. Instead of first, they landed at third, with Benfica and Porto mustering remarkable 85 and 82-point campaigns, respectively.

Whether Sporting CP reclaim the Premeira Liga this year or not, though, one thing is for sure: having three teams that are this good, year after year, consistently makes the Portuguese top-flight an exciting division to watch. Still, how much more exciting would it be to see the underdog win for once?

Want to root for the underdog? Pick up a new Sporting Lisbon jersey 2015 2016 from Soccer Box right now!