Glasgow Celtic at the UEFA Champions League: A Look at History and 2015 - 2016 Prospects

Thanks to their win in the Scottish League Championship last season, Glasgow Celtic will have an opportunity to qualify for the 2015 2016 UEFA Champions League via the playoffs. The Scottish soccer club have been drawn against Sweden's Malmo FF in the "Champions Route," which consists of league winners from countries where football isn't quite as popular or competitive as it is in England, Spain, etc. Last year, Celtic at the UEFA Champions League, suffered disappointment in the playoff, Slovenia's NK Maribor in a two-leg battle defeated them, but they did qualify for the UCL group stage in 2013 2014.

Could this year see the Celts returning to the prestigious European football tournament? Pick up a Glasgow Celtic shirt 2015 2016 from Soccer Box to root for the club, and then read on for a brief history of their appearances and performances in the Champions League.

Glasgow Celtic at the Champions League

The Celts have an interesting history at the Champions League, in that they've been a dominant football force in their own country for many years-they've won the Scottish League Championship 46 times, including the last four in a row-but have missed out on UCL qualification many times regardless.

That's not to say that Glasgow Celtic haven't experienced any measure of success at the venerated UEFA soccer competition. On the contrary, the Celts have actually won the UCL-albeit, back when it was known as the European Cup instead of the Champions League. Indeed, Celtic beat Inter Milan to win the title back in 1966 1967. They also nearly clinched a second European Cup title just a few seasons later, reaching the final (but losing to Feyenoord) in 1969 1970.

Since those two banner years, Glasgow Celtic have had a more inconsistent record at the event. Between 1970 and 1992, when the European Cup was rebranded as the Champions League, the Celts were featured in the event pretty regularly-though they never reached the semifinals after 1974.

Once the European Cup became the Champions League, though, Glasgow Celtic seemed to have more trouble qualifying for the tournament. Indeed, after the UCL came to be in 1992, it took the better part of a decade for the Celts to reach the group stage of the event. When they did qualify, in 2001 2002, they were eliminated early, after finishing third in their group behind Juventus and Porto.

In the past decade or so, Glasgow Celtic have qualified for the Champions League a few times, but haven't come close to returning to the finals or semifinals. In both 2003 2004 and 2004 2005, for instance, 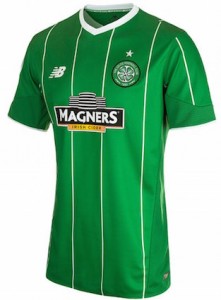 the Celts qualified, but were eliminated after the group stage.

For the Celts, the best Champions League years in recent memory were 2007 and 2008, both of which saw the Scottish football club reaching the round of 16. In 2006 2007, they nearly made it to the quarterfinals, only losing to AC Milan in extra time of the second round of 16 leg. The aggregate score for the round ended at 1-0, in favor of Milan. In 2007 2008, Celtic lost to Barcelona in the round of 16, on a two-game aggregate scored of 4-2.

The Celts have continued more consistent UCL appearances since those two successful years. In both 2008 2009 and 2013 2014, the soccer squad reached the group stage. In 2012 2013, meanwhile, they reached the round of 16, before being eliminated by Juventus in a tough 5-0 aggregate.

Undoubtedly, the goal for the wearers of the Glasgow Celtic away shirt 2015 2016 is to not only qualify for the UEFA's most prestigious club football tournament, but to also get past the round of 16 for the first time since the European Cup was rebranded as the Champions League.

Of course, it's tough to predict what kind of challenges the Celts could face in the group stage, if they make it that far. First, the Scottish club will have to beat Malmo FF in the playoffs. These games, which are scheduled for August 19th and 25th, will be a challenge for Glasgow-considering the fact that Malmo made it to last year's Champions League, and Celtic did not.

With that said, though, the Celts have had a more consistent record of UCL qualification than Malmo in recent years. In fact, 2014 2015 was Malmo's first appearance in the tournament since the 1992 rebranding, so Celtic might actually have the leg up.

Are you rooting for Scotland's top football club in this year's Champions League? If so, pick up a new Glasgow Celtic shirt 2015 2016 from Soccer Box and get ready to tune in for the playoff games on August 19th and 25th.