It's no secret that Chelsea football club is in the midst of what could end up being its best Premier League season in a decade. 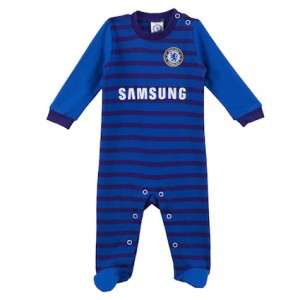 Add a strong performance in the group stages of the 2014 2015 Champions League, and it's clear that the Blues are on top of the world right now. But as parents stock up on Chelsea baby clothes for their infant this holiday, we thought we'd ponder a fun question: who are Chelsea FC's greatest footballers ever? And who should those infants dream about while wearing their sleepsuit?

Right now, Soccer Box has player-specific jerseys and other clothes available for some of the current greats. Check out our home jerseys for the likes of midfielder Eden Hazard, 2013 2014's leading goalscorer, or midfielder Cesc Fabregas, one of Chelsea's big transfers for 2014 2015. We also have other items, whether you are shopping for a baby (check out our Chelsea infant sleepsuit 2014 2015!) or for yourself. Take a look around our soccer store today!

No conversation about Chelsea's greatest players would be complete without a discussion of some of the club's more recent contributors. Perhaps the most notable of those is Frank Lampard, who is the all-time leading goalscorer for the Blues. If you've dressed your infant in Chelsea baby clothes in the past decade or so, chances are you were a big fan of Frank.

Lampard transferred to New York City for 2014 2015 (and was promptly loaned to Manchester City for a return to the Premier League), but before that, he had played at Stamford Bridge since 2001. In that period, he made 429 league appearances (678 overall) and scored 147 league goals (211 overall). He was the team's top scorer during five separate seasons, and just generally defined the entire post-millennial run for the Chelsea football club.

With Frank moved on to other things, fans will be looking for other Blues players to admire. And whether you are dressing your baby in the Chelsea infant sleepsuit 2014 2015 or wearing team clothes yourself, there are a few nominees.

For the 2014 - 2015 season, the most obvious candidate for the "all-time greats" list has been striker Diego Costa. Costa transferred to Stamford Bridge from Atletico Madrid, and has already made quite the impression.

The star soccer player managed his first 10 goals with the Blues in just nine appearances. If he hadn't missed the better part of a month thanks to a hamstring injury, then he might have already surpassed Eden Hazard's 14-goal benchmark from last year.

Clearly, Costa is one to watch: if he continues to play like he has throughout the early 2014 2015 season, he could make the leading scorer list in just a matter of years. The number needed to make the top 10 at this point is 94 goals-a manageable feat for a guy who seems to find the back of the net once per match.

There are other players still on the team who could end up breaking records. Captain John Terry, for instance, is currently fourth in terms of all-time Chelsea appearances. He's been playing with the squad since 1998 and has made 624 appearances. He won't touch the top two-Peter Bonetti with 729 and Ron Harris with a jaw-dropping 795-but he could feasibly pass Lampard, who is third with 648.

Speaking of Bonetti and Harris, both are to be celebrated if you are a big enough fan to wrap your infant child in Chelsea baby clothes or sleepsuit pajamas! Both played for Chelsea during the same eras (the 60s and 70s) and both stuck around for 20 years (Bonetti from 1959 to 1979 and Harris from 1961 to 1980). They are arguably the best goalkeeper and defender, respectively, in Stamford Bridge history.

The list of Chelsea greats goes on and on, and if you are looking to purchase a new Chelsea infant sleepsuit 2014 2015 at Soccer Box, you probably know many of them. There's Bobby Tambling, who held the scoring record with 202 goals, before Lampard broke it. And who could forget Jimmy Greaves, who scored 43 goals in the 1960 1961 season-more than any other Blues player ever.

Celebrate these legendary football stars and stop by Soccer Box today to check out our selection of Chelsea baby clothes, or adult-sized jerseys. Whether you are looking for a snug sleepsuit for your infant, or a 2014 2015 home shirt for yourself, you can find it here.