Chelsea Football Kits Through the Years

Chelsea is a long standing soccer team in England and has formed a rather large fan base over the years. And with the likes of Hazard, Terry and Lampard joining the squad in previous seasons, we can see why this club is a popular choice to support. Situated around London, this football team has a lot of competition from other squads; however they never fail to stand out with their classic blue and white colour scheme and unique alternative jerseys.

So have a read below and come on a journey with us looking back at the historic styling of all of the Chelsea sportswear from the likes of Le Coq Sportif, Umbro, Adidas and Nike. We also explore how the CFC home strip evolved to the colour scheme we know and love today. And we will also discuss which shirts were a complete hit with supporters and which had totally missed the mark.

So how did this football team come to have this blue and white colouring seen all across the Stamford Bridge stadium today? Going back to when the team was first established, they always used to play in a blue jersey for their home kit, however this top was a much lighter shade. Along with this shirt, the players also wore white shorts and either blue or black socks. The inspiration for this first kit was taken from the then president’s colours which he wore when racing. However, by choosing a different colour for each clothing item, the appearance of the kit looked very mismatched.

So to make the strip look more sleek and cohesive, in 1912 the football shirt was made a darker, richer shade of blue. This then matched the sock excellently and gave the kit a much needed update. After using this colouring for a considerable amount of time, in the 1960s they decided to make another change to the kit, and this would be the last. The shorts were adapted to match the base colour blue chosen for the shirt; this therefore made the colouring flow nicely throughout the kit. And with the white accents on the shorts and shirt complementing the blue superbly, they then settled on white socks to complete the home strip.

Along with the home shirt, Chelsea also has away and third sportswear ranges which have been adapted over the years. The away shirt has always featured a yellow or white jersey with blue outlining and detailing. However, in recent years the manufacturers have ventured out of this comfort zone colour palette and tried to incorporate colours such as fluorescent yellow, teal and grey into the mix for their alternate strips. This update has then been a refreshing change to see players in a different set of clothing each season, which creates an awe of anticipation for the new style to be released each season. By doing this we find that the manufacturer’s stylist are getting more creative control over the sportswear and are able to add a more stylish and modern feel to a much-loved kit.

At the end of the 16/17 season, Chelsea signed a 15 year long contract with Nike for around £60m a year, and this was for them to produce the home, away, third and training kit ranges for the club. However, prior to this they also had the added fee of £40m which was the cost of terminating their six year contract with Adidas early in order for them to begin their new venture with Nike. But before this most recent partnership, CFC has worked with a number of sportswear brands across the world.

As you can see below in our breakdown of the contracts, the longest collaboration for Chelsea was with Umbro who they saw 18 years with all together. Closely behind those were Adidas whose successful partnership lasted for 11 years and still stand as one of the fan’s most popular manufacturer collaborations. But this would have been a much longer partnership if the club hadn’t of ended their contract prematurely.

As Chelsea is one for long term contracts, you will find that some jerseys are a complete hit with fans and some are not. However, brands feel that they need to switch up the styles to keep things interesting. Most of the loved shirts are those which have a significant meaning attached to them such as a successful match or winning a cup. So below we will take a look at four of the most adorned home shirts of Chelsea over the years:

The 1975/77 home shirt is made up of a simplistic blue base with a white collar and the CFC crest on the chest. However, this basic styling is a hit with supporters as it holds a lot of meaning to the club’s history. At the end of this season the squad earnt a promotion up the leagues and were led by the youngest ever captain Ray Williams.

What makes the 1995/97 home shirt such a significant part of the Chelsea kit history is the fact that it is associated with success. This stems from the fact that during this season the club managed to end their 26 yearlong trophy drought and win themselves the FA cup.

Another jersey linked to a successful season of playing is the 2009/10 home jersey. What makes this a well-loved top is the fact that the club took home the Premier League title and the FA cup during this tournament season. This therefore made it their sixth FA cup triumph overall out of the many years working excessively hard to acquire one.

The 2012/13 home top made by Adidas won the fans over as this shirt showed no signs of red at all in its design. This made it a popular choice as most supporters weren’t completely sold on the pop of red which kept appearing in the home kit. Plus the team won the Europa League during this season and this was their first and only trophy in the tournament.

Although there was many CFC home jerseys which fans adored, there are a number of these tops which the supporters just couldn’t seem to take a fancy to. This is expected as manufacturers try to mix it up over the years to avoid repeating the same style. But below are just a few of the home strips which weren’t liked as much by the fans:

The 1987/89 home jersey was the first one produced for Chelsea by Umbro in the start of their 11 yearlong contract. However, they did not get off to a good start with supporters down to the fact they felt the home shirt’s style was an eye-sore. The top featured the signature blue base colour but also had a white crisscross striped effect all over it. And this pattern looks too much like the net used in football which is what made the shirt so unpopular. Plus it also was the season where the team were relegated so this jersey on a whole is a horrible reminder of previous mistakes.

Some supporters do not like the home jersey when the manufacturer tries to introduce red into the style as to them the classic colour is just blue and white. So whenever anybody attempts to upgrade or change this, fans are much displeased. Therefore upon the launch of Nike’s second home jersey for the team, supporters were unimpressed by the subtle striped effect which incorporated this colour. Although it complements the logo of the Yokohama Tyres on the chest, having red on the shirt is just something supporters do not like to see.

Notable Away and Third Kits

Chelsea not only has home shirts, but they also have away and third strips which constantly change each season. Therefore you will find that there are a number of these kits which fans love and just don’t like. And below we will explore the most notable of these shirts: 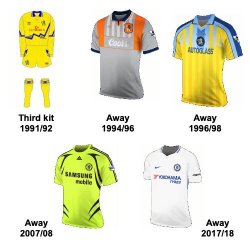 The 1991/92 third shirt was produced by Umbro, however despite its eye-catching yellow base colour, supporters did not like the design used on the front. There was a single blue zig-zag stripe vertically across the chest which almost looked out of place on the jersey. And fans thought this resembled a graph like appearance so were displeased at this failed attempt to make the top stylish and modern. This was also the year that the club unfortunately failed to make it into the Europa League.

Again the 1994/96 away top was manufactured by Umbro and although the colours used were quite muted, the design itself was too overpowering for fans. The usage of orange, blue and a textured base was too much to handle. Orange and dark blue blocks of colour were seen around the top of the chest and it did not match nicely with the blue and white marl effect of the base.

Another Umbro away shirt which failed to impress was the one worn during the 1996/98 season. The main reasoning behind this was the fact that the colour scheme was all too busy. The bright yellow base worked nicely with the blue accents. However, by adding a multi-tonal blue striped pattern to the chest seemed too distracting.

One of the few Adidas shirts which were not a hit with the supporters was the 2007/08 away jersey. For this top the manufacturer chose a striking and vibrant yellow colouring. Although yellow is a common colour for the away shirt, this vibrancy was all too overpowering for fans. Looking back through the history of the Chelsea tops we can see that the more colourful and outstanding the shirt is, the fewer supporters are likely to adore it.

Lastly, the most disliked shirt of the bunch was the 2017/18 away top produced by Nike during their first year of their partnership. This shirt was plain white with minimal blue accents and this had more of a basic template appearance rather than embracing any aspect of the club. And another reason why this top was not a fan favourite was the fact that it strongly resembled the look of the Tottenham Hotspur home jersey. Therefore fans felt that there was no individuality linked to this shirt and it looked too close for comfort to a rivals’ kit.

Which are Your Favourite CFC Shirts?

Throughout this article we have taken an in depth look into how Chelsea acquired its signature colour scheme for their home shirt. And along with this we have explored the most liked and disliked jerseys produced for this soccer team over the years. With all of this in mind, we want to know your opinions on the historic style of CFC. So get in touch with us over on our social media pages where you can tell us which your favourite or hated appearance was and why.

Don’t forget that you can also pick up the latest and previous season’s Chelsea home shirts as well as the away, third and training kits from our website – Soccer Box. You are also able to choose to have a player’s or your own details adorned to the rear of the top using official Premier League print for that extra authentic free – an excellent choice for a special gift.