When players charge the fields of Brazil wearing the Chile football shirt at this year's FIFA World Cup tournament, it will be only the ninth time in the event's history that such an occurrence has happened. Over the years, everything from disqualification 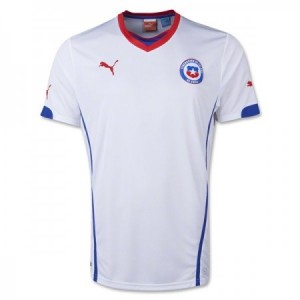 to poor performance to outright banning has kept the Chile national soccer team from partaking in the world's biggest soccer event.

This year, however, not only has Chile qualified for the World Cup, but the team also has a decent position on FIFA's world rankings. In fact, Chile is currently ranked and seeded at 13 by FIFA, a fact that has established the team as something of a dark horse underdog for tournament success. Needless to say, the better-than-average ranking has made products like the Chile 2014 FIFA World Cup away jersey a sleek white Puma shirt with blue and white accents a popular commodity on the Soccer Box online store.

Clearly, fans are ready to see this Chile team find success. Soccer Box also has away jerseys and team scarfs to help those fans amplify their team spirit for this summer's big event.

Over the past few decades, the Chile national football team has been somewhat known in the world soccer community for its difficulties surrounding the World Cup. After failing to qualify for the 1986 games, the Chile team was struck by disaster that kept it out of qualification contention in both 1990.

The incident that caused the disqualification took place at a 1989 match against Brazil in Rio de Janeiro. The game was high-stakes from the get-go, as a loss would put an end to Chile's qualification hopes for the World Cup the following year.

Down 1-0 and with time running out, the Chile team looked to be in dire straits when a Brazil fan threw a flaming firework onto the field. It appeared at first that the firework had struck goalkeeper Roberto Rojas, and blood stemming from a wound on Rojas' head seemingly confirmed that the player had been severely injured. He was carried off the field.

The Chile team left the field and refused to return to finish the game, citing unsafe conditions and rowdy fans. The match was ultimately abandoned and the score as well as the qualification standings were left in limbo.

As it turned out, Rojas had not been struck by the firework, but had instead cut himself with a razor blade concealed in his glove. Worse, his coach had ordered him via walkie-talkie to collapse on the field so that he could be carried away for maximum effect.

The next time that Chile made an appearance at a World Cup event was in 1998. There, the team began mounting a comeback that will continue this year when the Chile 2014 FIFA World Cup away jersey appears in Brazil.

The Chile football shirt has appeared in every World Cup since its 1994 ban, though the team has twice (in 1998 and 2006, respectively) failed to advance past the group stage. The team finished strong in 2002, making it to the quarterfinals, and performed admirably in 2010, losing in the round of 16. This year though, fans are hoping for a bit more success.

Fans will get their first opportunity to wear a Chile 2014 FIFA World Cup away jersey or home shirt when Chile faces off against Spain, The Netherlands, and Australia in Group B. The group will certainly prove a challenging one, as Spain and The Netherlands were the respective winners and runners-up at 2010's World Cup. However, of the four teams, Chile actually has the second highest ranking with FIFA, meaning that it certainly has a chance of advancing.

Can Chile continue its comeback this year? Can the team eradicate the national shame of the 1989 fake injury incident with a win in Brazil? Those questions will be answered come June and July, but for now, you can head to Soccer Box and pick up a stylish Chile football shirt.