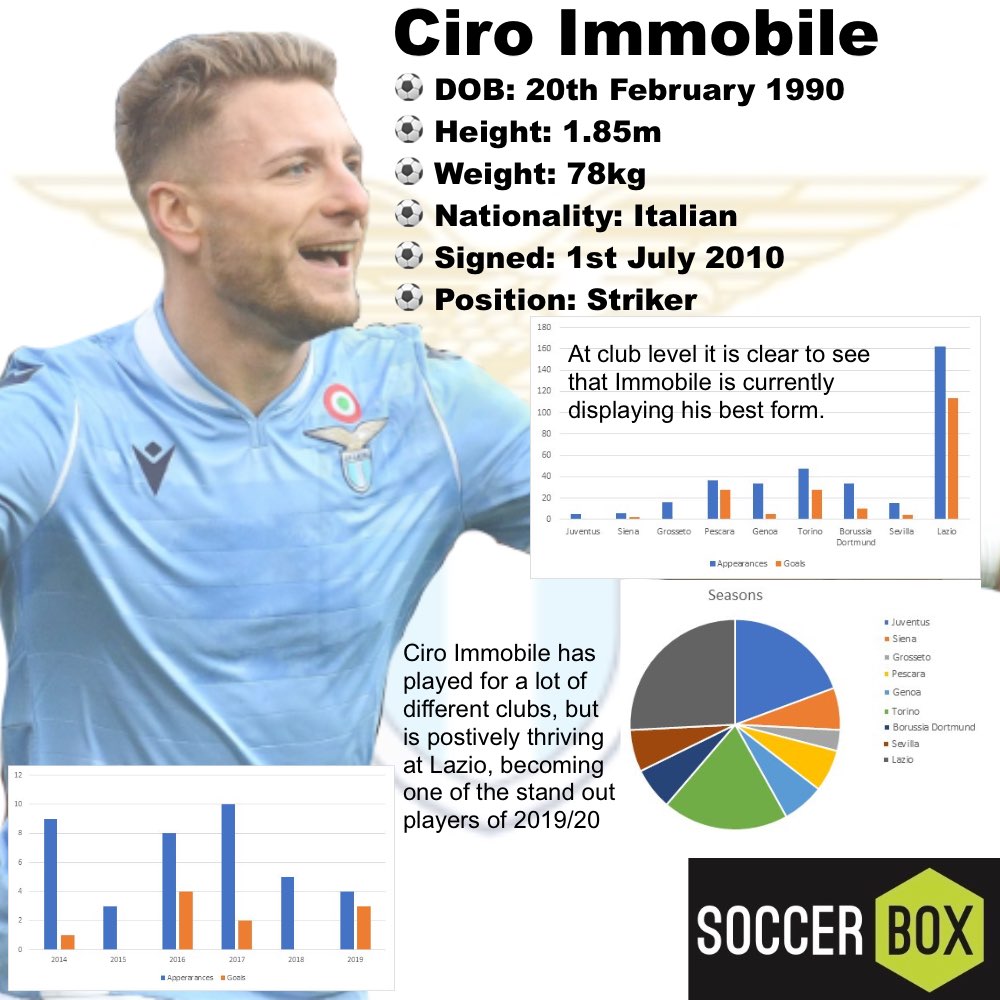 Within this article we are going to look across the long-standing football career of Ciro Immobile. Exploring his transition from youth to senior squads on both the club and international side, we are going to analyze his historic and current performance on the pitch.

Here are the basics of Ciro Immobile’s personal and player profile, keep reading to find out more about his football career:

Ciro was born on the 20th February 1990 in Torre Annunziata and started his youth career in football at the Torre Annunziata ’88. After being at the football school in his local area, he transferred to Maria Rosa before joining the Salernitana youth team. During his time with Salernitana he did not reach the level he wanted of exposure for his talent as he often found himself on the bench. Because of this negative experience with Salernitana he moved shortly after joining to the youth team for Sorrento.

With the Sorrento youth team Ciro thrived as he scored 30 goals in the U17 division during the 2007/08 season. During a tournament against Torino, the scouts from Juventus were really impressed with his performance and later signed him at the age of 18 for 80,000 Euros. During his time with Juventus he played in the Primavera league and saw his team through to their 2009 win at Torneo di Viareggio. Throughout the season he scored a total of five goals for the Juventus youth side, with two of these being in the final.

In March 2009 Ciro made his debut as a senior Juventus player as he made his first Serie A appearance against Bologna. During this match he was called up to replace the captain in the 89th minute. Only a few months after his first appearance on the pitch for the senior squad, he made his debut in a European competition when he was sent on as a sub during the second half of the Champions League match against Bordeaux.

Despite his appearances for Juventus being fleeting during the beginning of his career with the first team, he played in the 2010 Torneo di Viareggio final and scored a hat-trick against Empoli. This achievement by Immobile lead Juventus to their second consecutive win in the league.

With only a portion of a season under his belt with the Juventus squad, he was sent out on loan to Siena and Grosseto in 2010. While playing with Siena he was not able to make it onto the first team while scoring 1 goal in just 4 appearances, he chose to leave. Upon notifying Juventus of this change, he was immediately transferred to Grosseto instead of cutting his loan period short. His debut with Grosseto was on the 29th January 2011 when they won 1-0 to Vicenza Calcio. After only 16 appearance with the team, he returned to Juventus in June 2011.

Only being back with Juventus for a few weeks, Immobile was out on loan again to another Serie B club called Pescara. Less than 10 days into his loan to Pescara, Immobile scored his first goal for the club against Hellas Verona during his debut. Throughout his time with Pescara he acquired a total of 14 goals for 2011/12.

At the beginning of 2012, it was confirmed that Genoa had an interest in purchasing Immobile from Juventus. They had paid 4M Euros for half of the player’s rights from Juventus after seeing his performance in the Serie B. During this time, he was still finishing off his loan contract with Pescara in which he lead the club to their Serie A promotion and finished the season with 28 and was named the Serie B’s Player of the Year at the 2012 AIC Gran Gala del Calcio. At the end of the season his co-ownership agreement was renewed so that Juventus and Genoa could share the player until the end of the 2012/13 season.

At the end of his loan period with Pescara, he then joined his co-owner squad – Genoa. He played with the team until the end of the season. Happy with his performance, Genoa extended their co-ownership of the player for a further year. However, their share of Immobile was purchased back by Juventus who then signed another co-ownership agreement with Torino for 2.75M Euros.

His first debut for Torino was against his former teammates – Pescara, during this match he scored his first goal of the season for the Coppa Italia. Playing with Torino he scored a hattrick against Livorno as well as another 22 goals during the season. His stint with Torino also saw him become the first Torino player to win the Capocannoniere since 1976/77.

He played with Torino up until the end of the 2013/14 season where he was signed by Borussia Dortmund despite the co-ownership agreement between Torino and Juventus. Torino wanted to retain co-ownership of the player and believed that Dortmund and Juventus were violating FIFA regulations regarding transfers as both co-owners did not agree on the sale of Immobile. Due to this, Juventus sold their share of Ciro to Torino so that they could keep him a further season before moving to Dortmund in 2014.

Immobile played in the Bundesliga with Borussia Dortmund for only a few months before being sent out on loan to Sevilla after only scoring three goals during the 2014/15 season. Sevilla was given the option to sign him outright, which they decided to do at the end of the season due to an obligation to buy clause in his loan agreement.

After signing with Sevilla, he was loaned back to Torino up until the end of the 2015/16 season before he suffered a muscular injury in March 2016 which saw him sidelined for a month. Once fully recovered, Immobile was signed with Lazio for 8.75M Euros on the 27th July 2016. Since then he has played with Lazio and continues to thrive with the club.

Despite him constantly moving between squads over the years, the main thing which has remained consistent is his participation in international football with the Italian national team. He started playing for Italy in the U20s during the 2009 European Championship qualifier, but the squad failed to make the playoffs. He then appeared again in the under 21 squad in 2009 and after his performance in friendly matches he was selected as a member of the U-21 team for the 2013 UEFA European Under-21 Football Championships.

Starting his senior career with the Italian national team, Ciro received his first call-up on the 2nd March 2014 for a friendly against Spain, and he made his first debut when he was sent on as a sub in the 69th minute. After this, he was named one of the 30-man squad for the 2014 FIFA World Cup and made it down to the 23-man listing. During the team’s first warm-up match for the World Cup, Immobile scored a hattrick and in his first competitive debut was against England and his first goal for Italy competitively was against the Netherlands.

In this section of the article we are going to look collectively at his seasons with each squad and how Immobile has performed in terms of goals and appearances. We have broken down each club stint below including his time with the Italian national team:

Next, we are going to look at the individual awards Ciro Immobile has acquired over his long professional soccer career:

Is Ciro An Effective Football Player?

In this post we have looked across the career of Ciro and his soccer performance. From youth to senior, what do you think his best era was? Do you think he is an asset to Lazio? Let us know your thoughts over on our social media pages today. And don’t forget that you can also pick up the latest and historic Lazio football shirts over on our online store – Soccer Box and showcase your support for your favourite player now.