The Colombia national football team made a tremendous splash at last year's World Cup in Brazil, progressing all the way to the quarterfinals after three tournaments in a row of missed qualification. 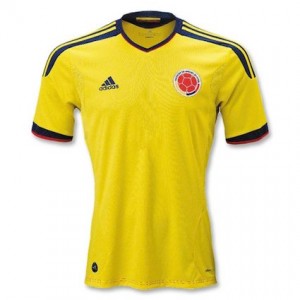 Not only was it the country's best-ever finish at the FIFA event, but it was also the first time that a Colombian player had received the Golden Boot award. Midfielder James Rodriguez scored six goals in the tournament-more than any other player. Needless to say, even after the Coffeers were eliminated by Brazil in the quarters, it was still a proud time to be a fan in the Colombia football shirt.

Now, the Colombia national side is ready to begin its next chapter, and you can join them along the way!Â At Soccer Box, we have just received stock of the brand new Colombia home jersey 2015 2016. The brilliant yellow home shirt, manufactured by Adidas, will be worn in fixtures for the upcoming 2015 Copa America. Help the Coffeers achieve a second-ever title at the South American football event by wearing the jersey and showing your team spirit!

A second Copa America title is what fans in the Colombia football shirt are looking for in 2015. The team first won the event in 2001, when they hosted it. That year, the Coffeers won all six of their matches-between the group stages and the knockout phases. They ultimately beat Mexico 1-0 to take the title in front of thrilled home audiences.

Other years have seen the Colombians coming close to victory at the South American soccer competition. In 1975, they finished in second place, losing by one point to Peru.

The 1980s and 90s, meanwhile, saw Colombia as a consistent contender in the contest. In 1987, they finished in third place; in 1991, they were fourth; in 1993 and 1995, they returned to the third spot on the podium. And while the squad couldn't quite defend their 2001 title at 2004's event in Peru, they still reached the semifinals and finished fourth.

In the wake of last year's dynamic World Cup performance, though, fans are hoping that this year will see a return to the top slot for the wearers of the Colombia home jersey 2015 2016. Supporters will get a glimpse into whether or not those hopes are well founded in June, when group stage play begins for the 2015 incarnation of Copa America.

For the early stages of the tournament, the Coffeers have been drawn into Group C, which includes Brazil, Peru, and Venezuela. It's a challenging lineup, given that Brazil has won the tournament on five previous occasions-most recently in 2007. Peru is also a threat, having won a few times in the past, and having finished in third place in 2011.

Still, most soccer analysts are predicting that we will see the wearers of the Colombia football shirt progressing well beyond the groups. After all, the team has good momentum on its side following the 2014 World Cup victory. And since James Rodriguez is still only 23 years old, it's likely that his best days are still ahead of him. The young attacking midfielder could easily hit a new zenith in 2015 or 2016.

The Coffeers will launch their 2015 campaign on June 14th, when they will don the Colombia home jersey 2015 2016 to take on Venezuela. Having never won the tournament-and having only rarely reached the knockouts-Venezuela is considered the weakest link in Group C. Still, the football team finished in fourth place in 2011, so they can't exactly be classified as a "pushover."

The Colombian groups schedule also includes a June 17th away match with Brazil, and a June 21st home fixture against the Peruvian side. Root for the country today with a brand new 2015 2016 football jersey!

You can find the latest version of the Colombia football shirt at Soccer Box today! The 2015 2016 home jersey is brand new, and is the perfect way to show your support for this skilled football squad.