The Czech Republic national football team may have missed out on qualification for this summer's FIFA World Cup in Brazil. However, since breaking from Czechoslovakia, the Czech Republic has never failed to qualify for the UEFA European 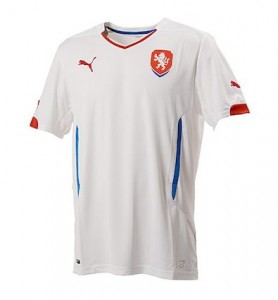 Championship. From the looks of it, the Czech side is headed for another Euro qualification, and fans can celebrate that fact with a new set of Czech Republic football shirts, now available at Soccer Box!

The 2014 and 2015 Czech Republic football shirts will be worn for the entirety of the Euro 2016 qualifiers. The first of these qualifying matches was played in September, and the last will be played in October of next year.

This time around, for the qualifiers, the Czech Republic side was drawn into UEFA qualifying Group A. The group also includes five other teams, including the Netherlands, Iceland, Kazakhstan, Latvia, and Turkey.

Things shook out in surprising fashion during the first round of play in Group A, a set of three different matches that took place on September 9. Not only did Iceland crush Turkey in a 3-0 match, but the Czech Republic thrilled home audiences by defeating the Netherlands, a team that has recently thrived in World Cup competition.

The Czech Republic triumphing over the Netherlands was a surprising outcome for numerous reasons. It's not that the Czech side has not been a successful soccer force in the past. On the contrary, the Czech Republic has qualified for five straight European Championships, starting with a stunning debutant runner-up performance in 1996. The record of persistence has most football fans expecting to see the red and white Czech Republic football shirts making an appearance at Euro 2016.

The Netherlands' storied history at the European Championship, combined with the country's recent successes at the World Cup-a third-place finish this year and a runner-up finish in 2010-marked the team as a real heavyweight coming into the Euro 2016 qualifying rounds. Most football experts fully expected the Netherlands to win qualifying Group A and move forward to another productive Euro appearance.

All of that could still happen, but an upset at the hands of the Czech Republic certainly wasn't expected. The match was a close one, starting with a goal at the 22-minute mark (by Czech winger Borek Dockal) that was answered by a goal from the Netherlands side at the 55-minute mark. The Czech side took a last minute lead at 90+1, when winger Vaclav Pilaf scored a goal to win the match.

The question now is how the Czech Republic will perform going forward with the Euro 2016 qualifiers. It is likely that the team has already faced the most challenging opponent in Group A.

But will the Czech Republic away jersey 2014 2015 bring about as much luck as the Czech home shirt did? That question will be answered in the away match that the Czech side is set to play against Turkey on October 10.

Turkey lost to Iceland, in stunning fashion, during the first round of Group A play. That 3-0 loss has put Turkey at the bottom of the table standings for the group. However, a pair of recent outcomes in major soccer events (a third-place slot in the 2002 World Cup and a runner-up finish in Euro 2008) shows Turkey as a team that can't easily be written off.