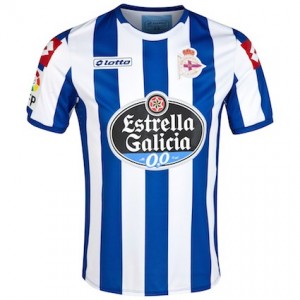 Deportivo La Coruna might not be the colossal team name in Spain that Real Madrid is, but the squad will at very least be getting some extra attention this year. Deportivo La Coruna won a promotion into La Liga this season after finishing in the runner-up slot in last season's Segunda Division, and fans can celebrate that fact by purchasing a brand new Deportivo La Coruna soccer jersey from the Soccer Box online store.

Indeed, to mark Deportivo's promotion into La Liga, Soccer Box has added the Deportivo La Coruna home shirt 2014 -2015 to our product stable for the year. The shirt, made by kit manufacturer Lotto and sponsored by the Estrella Galicia beer brand, is a classic white and blue design with the colors alternating between white and blue stripes. It's a great looking shirt that will hopefully fuel Deportivo La Coruna toward a club-best performance in this year's La Liga football division.

Many football fans don't like to invest in shirts like the Deportivo La Coruna soccer jersey, if only because football clubs that are frequently relegated and then promoted again don't often stand the best chances of contending for championship victory in a top division. However, in the case of Deportiva La Coruna, it hasn't actually been very long since the club was on top of the La Liga division.

Indeed, back in the 1990s and early 2000s, Deportiva was a constant fixture near the top of the La Liga table. The football club only has a single championship title in La Liga for the 1999 2000 season. However, a string of second and third place finishes from 2000 through to 2004 marked the club as one of the best Spanish football teams of the first half of the decade.

It was the second half the 2000s where things started to get a bit dicey for Deportiva La Coruna. From 2005 to 2010, the club failed to place higher than 7th on the La Liga table. In the 2010 2011 season, Deportiva fell all the way to 18th place and was relegated to play in the Segunda Division for the first time in two decades.

While the Deportivo La Coruna home shirt 2014 -2015 certainly symbolized the rise of Deportiva from the Segunda Division and back into La Liga, it isn't the first team jersey to do so. On the contrary, Deportiva La Coruna has played in the second division twice in the past five years.

First, after the 2010 2011 relegation, Deportiva came back with a vengeance in Segunda Division, placing second on the league table and earning promotion back into La Liga. The next season, however, saw Deportiva La Coruna getting crushed by the considerable pressures of the top division, losing 19 matches and finishing one slot from the bottom of the table. With that finish, the club was relegated yet again.

So it was that last season, Deportiva more or less repeated its performance from two years earlier, finishing in second place in Segunda Division to earn promotion once more. With 19 wins, 12 draws, and 11 losses, Deportiva's performance was solid but not quite good enough to convince skeptics that the club is ready to return to La Liga.

However, return to La Liga is precisely what Deportiva will do this season, and fans are ready to don the Deportivo La Coruna home shirt 2014 -2015 and support their football team, win or lose.

The hope, of course, is that Deportiva will return to its glory days of the 1990s and 2000s and that the team will rise back to the upper echelons of the division table. However, with football clubs as tough as Real Madrid, Barcelona, and Atletico Madrid waiting at the top, Deportiva and its players will have their work cut out for them.

Is Deportiva ready to face the pressures of La Liga again, or will the football club simply continue its pattern of relegations followed by promotions? If you have faith in the team, show it by wearing a new Deportivo La Coruna soccer jersey from Soccer Box!