The Euro 2016 Playoff: Which Four Teams Will Be Heading to the Finals?

The qualifying group stage competition for the 2016 European Championship may have wrapped up on Tuesday, October 13th, but the battle isn't over just yet. Sure, 20 of the 24 teams that will make up the UEFA's big tournament next summer have already been decided. The remaining four slots, meanwhile, will be decided in a playoff between the third-placed football squads from each of the qualifying groups. That contest is set to begin on November 12th.

The question is, which four countries will be filling those last four slots? The third-placed teams from the Euro 2016 qualifiers include Turkey, Hungary, Ukraine, Norway, Denmark, Sweden, Republic of Ireland, Bosnia and Herzegovina, and Slovakia. Turkey have already qualified for the 2016 European Championship, on the basis of being the third-place team with the best record in the qualifiers. The other eight teams, meanwhile, will battle one another for a chance to compete in France next summer.

UEFA have already gone ahead and seeded the eight remaining teams for the playoffs. Seeding positions are decided based on the UEFA's national team coefficient ranking system. The coefficient system takes three factors into account, looking at how countries performed in the Euro 2016 qualifying competition, the qualifiers and final tournament for the 2014 World Cup, and the 2012 European Championship qualifiers and final football tournament.

Based on these coefficient rankings, the national football squads from Bosnia and Herzegovina, Ukraine, Sweden, and Hungary are the favorites to progress to Euro 2016. Denmark, Republic of Ireland, Norway, and Slovenia are the "unseeded" pot two teams.

Coefficient Rankings: Do They Matter?

The question is, do UEFA's coefficient rankings actually matter? Can we reasonably expect the four "seeded" teams to progress and the four "unseeded" teams to miss out on Euro 2016 slots? Or will the qualifying playoffs be as unpredictable as the qualifiers themselves?

Undoubtedly, getting a seeded position in the playoffs is a good sign for those four teams. Back in 2012, the UEFA coefficients put Croatia, Portugal, Republic of Ireland, and the Czech Republic as the seeded teams for the playoffs, while Turkey, Bosnia and Herzegovina, Montenegro, and Estonia were unseeded. All four seeded teams won their playoff draws to progress to Euro 2012.

This year, though, the coefficients could be a bit more off, if only because Bosnia and Herzegovina continue to be ranked in such high estimation by UEFA.

Right now, Bosnia and Herzegovina are outranking the other national soccer teams in the Euro 2016 playoffs thanks to their appearance at the World Cup last summer. Of the eight countries playing in the playoffs, Bosnia and Herzegovina are the only ones who played in the 2014 World Cup. They exited after the group stage, during which they won a match against Iran, but lost to Argentina and Nigeria. 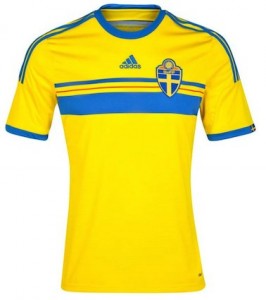 Despite their recent World Cup appearance, though, Bosnia and Herzegovina are arguably overrated by UEFA. They were seeded as a pot one team for the original Euro 2016 qualifying group stage draw, but only managed a third-place finish in Group B (behind Belgium and Wales). Based on pure Euro 2016 qualifying round performance, Bosnia and Herzegovina are the second weakest team in the bunch-just above Slovenia.

The other seeded teams, though, seem like safer bets. Hungary only lost two matches in the group stage and only finished narrowly below Turkey in the original ranking of the third-place teams. Sweden won five games, drew three, and lost two-a solid record made more promising by the presence of wizard striker Zlatan Ibrahimovic. And Ukraine won six of their 10 qualifying matches-tying them with Norway as the third-place soccer team that landed the most victories.

If Bosnia and Herzegovina continue to underperform, which other playoff team will take their place in Euro 2016? Norway seems like a good bet: they were passed by Croatia for the second place spot in Group H on the very last day of competition. Republic of Ireland are another possibility: they competed in the ultra-challenging Group D, alongside Germany and Poland, but still only conceded two losses.