Evolution of the Brazil Football Kits

The Brazil national football team is one of the most successful country squads in the world. With 5 World Cup 1st place trophies and an impressive track record in the South American Championships and the Copa America, there is no doubt that fans worldwide love sporting their signature kits. However, have you ever thought about how the team came to acquire their classic look? Below we will take a look into how they adopted their infamous colour scheme for the home and away strips along with having a brief look into the most loved and hated styles over the years.

History Behind the Signature Designs 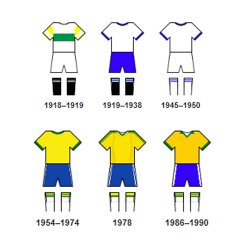 Originally the Brazil national football team played in all white kits with blue collars on the jerseys. However, after their defeat at the Maracano in the 1950 World Cup tournament, fans claimed that their loss was due to the lack of patriotism featured in the kit. Therefore in retaliation to this criticism, the squad opted to update their strip appearance.

After confirming with the Brazilian Sports Confederation, the Correio da Manha newspaper ran a competition whereby fans and citizens could send in their ideas for the new strip – which ultimately had to focus around the four colours of the Brazil flag. And the winning design was that of the classic yellow jersey with green outlining paired with blue shorts with a white trim. This style was submitted by a 19 year old from Pelotas and made its first début during their 1954 match against Chile. From then on the squad has donned this magnificent strip throughout their successes.

For the away strip, Brazil has a running blue theme since the 1930s. However, it became a staple base for all future away apparel during the 1958 World Cup Final. This was where Brazil faced Sweden, and as they both wore yellow shirts, Sweden were given the rights to play in their home kit as they were in their home grounds at the time. Therefore Brazil had to find an alternate strip to wear against their rivals as their signature yellow tops were a no-go and they did not have an alternate shirt.

As a result of this, they had to source a new kit for the players before the fixture against Sweden. And thankfully they managed to get together a bunch of blue shirts for the squad. However they had to sew the badge from their home jersey onto the blue tops. So in actual fact, their classic 1958 away shirt was originally customised on the day as a last minute substitute – making it such a significant part of the team’s history.

Manufacturers of the Brazil Kits Over Time

As the Brazil national football team has been established for a long period of time, they have also had the opportunity to work with a range of sports brands when it comes to producing their home, away and training ranges. Most recently they signed a contract with Nike in 1997 which has already been in place for over 20 years.

Prior to this, their longest standing collaboration was with local manufacturers Athleta. The contract with Athleta lasted around 23 years and is a significant part of the team’s history. They have also worked with Adidas, Topper and Umbro for much shorter periods of time but have still produced some amazing kits. Below is a breakdown of the years each manufacturer has worked with the Brazil football squad. 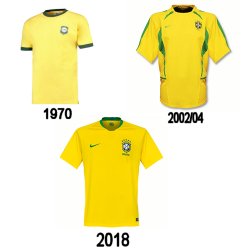 After they had established their classic yellow and green coloured jerseys, there were a lot of different styles put out onto the pitch by the manufacturers. And due to their reigning successes, a lot of this season’s jersey is associated with their domination of the World Cup or their South American tournaments. So below we will explore the most loved football shirts for Brazil’s home collection and how they are significant.

During the 1970 World Cup Brazil took two different home shirts with them. They intended on switching them over at half time at every match, apart from the final. They were split between the unique and modern feel of the Umbro technology but also wanted to pay homage to a local manufacturer they had worked with for a number of years – Athleta. So during the first 45 minutes of each game they wore the Umbro kit and during the last they had on the Athleta, they also wore the Umbro tops for the entire final. The only difference between these shirts was that of the printing to the rear as neither sported the manufacturer logo. Umbro opted for a more rounded font whereas Athleta had squared edges.

The home shirt worn by the players during the 2002 World Cup is a fan favourite. This is because it keeps to the classic plain yellow base with green outlines. But it also features stripes along the sides of the torso to help contour the appearance of the jersey. It is also the fact that during this tournament the squad managed to win another World Cup Champions title.

Worn during the 2018 World Cup in Russia, the latest Brazil home jersey was a success. Although the squad were unable to lift the trophy during the tournament, their shirt most certainly impressed. It oozed country pride with a sleek and sophisticated yellow base with green neckline and Nike Swoosh. Also, to the rear of the neck there was a stripe of green running vertically down part of the shoulder blades. And in the centre of this was a thin blue line matching the colouring featured in the club’s crest. There was also a graphic on the inside of the neck in green is a 'Seleção' pride crest. The vibrancy of the jersey also pays homage to the 1970 top where the Brazil match was first aired on colour TV and the bright colourful home shirts were visible worldwide.

And as styles and fashions are forever changing in the football world, we are guaranteed to of at least come across a few shirts which fans have not loved as much. Therefore below we will take look into some of the worst Brazil jerseys over the years.

The home jersey worn by Brazil in USA 1994 was one of the most disliked designs. Although the team went on to win the tournament, the attempt to modernise the jersey was not a hit with the fans. The sleek and signature yellow and green colour scheme featured a graphic print on the front of the crest which ruined the classic appearance of the shirt.

Fans were left shocked at the utter lack of creativity of the kits for 2011/2012. The classic yellow base was still intact but the green accents around the neck and sleeves were replaced with yellow fabric. The only pop of green seen on this jersey was that of the Nike Swoosh and a thick strip across the chest. This stripe looks so out of place and left fans feeling like the shirt was just thrown together. As if the green was an afterthought so adorned a random stripe to the jersey.

Paying homage to the 100th anniversary of FIFA, Brazil donned a special edition jersey for one match only against France. This shirt was an exact replica of the ones worn pre-50s when they sported a white home shirt. Luckily this shirt was only worn for this one match in commemoration of the federation’s anniversary. As fans greatly disliked this home appearance as it was unpatriotic as it did not feature any resemblance of the country’s flag. The shirt also had a vintage neck whereby there was a lace-up detailing, just like the tops worn back in the day. Made from cotton, this shirt lacked the modern technology used on the newer polyester blend tops. 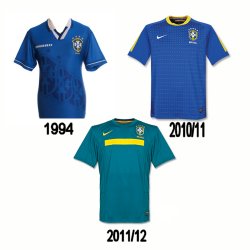 Along with having a home shirt, the Brazilian national football team also have away jerseys for the games played in other stadiums. So for every home shirt release there is an away launch, therefore there are a number of jerseys which have been complete hits with the fans and misses with the supporters. Below are just a few of the most notable away strips to of ever been worn by the team.

Like the aforementioned 1994 home shirt, the away jersey was greatly disliked also. This was because the top also featured a graphic print on the front of the shirt. However, this print was of the letters CBF. Although this was a much more subtle addition to the jersey compared to the much larger crest on the home, fans were still not impressed by this pitiful attempt at modernizing such a classic top.

Although the manufacturers for the Brazil sportswear have tried to keep to the plain blue base colour, some have also tried to introduce a modern feel to the top. This is what happened when Nike produce the squad’s away shirt for the 2010/2011 season. The top featured a blue base and white detailing around the neck and down the sleeves. However, there was also a dotted design across the front of the torso which displeased fans as this was not up to their clean and crisp standard appearance of their jerseys.

As mentioned above for the 2011/2012 home top, the away jersey was produced in the same way for the season. It featured a teal blue base with a vibrant yellow Nike Swoosh and random stripe in across the chest. This design wasn’t approved by supporters as they felt it lacked imagination and just looked thrown together.

What is Your Favourite Brazil Top?

Throughout this article we have taken in depths look into the historic reasoning behind the home and away Brazil kits. And we have also reviewed the most significant and not so impressive designs produced by an array of manufacturers. After reading this blog post we would like to know your thoughts on the shirts worn by the Brazilian national team. Are there any in particular that you absolutely love or hate? Find us over on social media and get in touch!

You can also shop our selection of Brazil football kits over on our online store – Soccer Box. Stocking a range of authentic sportswear, you are sure to find your favourite jersey amongst our array of products!