Barcelona Topple PSG for a Spot in the Champions League Semifinals

Last year, FC Barca missed out on a spot in the Champions League semifinals for the first time in seven years. Beaten by Atletico Madrid in the quarterfinals (on a razor-thin 1-2 aggregate, no less), Barcelona bowed out of the UEFA's most prestigious cup football tournament in disappointingly anticlimactic 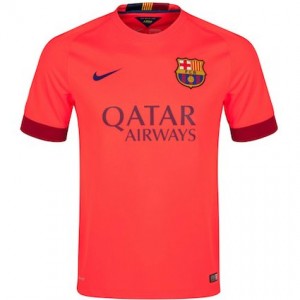 fashion. This year, though, the club was clearly not going to let history repeat itself. With a two-point victory against Paris Saint Germain on Tuesday, Barcelona not only secured a spot in the semis, but made themselves look even more like tournament frontrunners than they already did. Root for the football squad today, with an official Nike shirt (or two!) from Soccer Box's FC Barca shop.

Whether you are looking for the red and blue striped home shirt, or the sleek gray goalkeeper shirt, you can find it at Soccer Box's online shop! As for the orange Barcelona away shirt 2014 2015, we are offering great shop discounts on that shirt right now. Both the standard kids shirt and standard adult kit are on sale, as are numerous player-specific away jerseys.

The discounts on the away shirt range from 10 to 25% off, and shouldn't be missed! After all, with FC Barca as the arguable frontrunners for the 2014 2015 UEFA Champions League title, you can bet demand for the club's jerseys is going to get a boost. Stop by Soccer Box's FC Barca shop now to learn more about these sales, or to check out our full selection of Barcelona gear.

FC Barca have been nearly unstoppable throughout this year's UCL, from finishing at the top of their group in the group stage, to ousting Manchester City from the competition during the round of 16. They showed no signs of slowing down in their games against PSG over the past two weeks.

On the contrary, when the squad donned the Barcelona away shirt 2014 2015 on April 15th, for an away game at Paris Saint Germain's Parc des Princes, they performed like they had the home field advantage and not the other way around. Barca won that game 3-1, with two goals from Luis Suarez and one goal from Neymar driving the victory. To add insult to injury, PSG's home team only got a point thanks to a late-game own goal from Barcelona's Jeremy Mathieu.

Fans got even more reason to shop at Soccer Box's FC Barca shop on Tuesday, April 21st, when Barcelona actually did have the home field advantage, and used it to win an easy 2-0 victory. Neymar was the star of the match, scoring two goals in the first half to render the game more or less won by the time halftime rolled around. He didn't do it alone, though: arguably the highlight of the match was a dazzling dash up the pitch from Andres Iniesta, who dodged past one Paris Saint Germain defender after another to give Neymar an assist for the first goal of the game.

The Parisians were hoping that Zlatan Ibrahimovic, who was suspended for the first leg of the quarterfinals, would be able to turn the tides against Barca. Ibrahimovic is easily the club's top goal scorer for the 2014 2015 season. However, while the Swedish striker did put a ball in the net during the first half, an offside call resulted in the goal being disallowed. Barcelona goalkeeper Marc-Andre ter Stegen blocked a second on-target shot from Ibahimovic during the second half, to keep Paris scoreless in the match.

Fans in the Barcelona away shirt 2014 2015 are now starting to wonder if their squad might be able to win a UCL title this year. The squad dispatched both Manchester City and Paris Saint Germain (both skilled football teams) with little difficulty.

Furthermore, the FC Barca's front offensive line (of Neymar, Suarez, and Lionel Messi) is something that very few football clubs can withstand. It might just be the squad's golden ticket to their first Champions League title since 2011.

Ready to watch Barcelona dominate the last two rounds of the 2014 2015 UCL? Pick up a new home jersey or away shirt from Soccer Box's FC Barca shop to show your support for this talented football squad. Use the coupon code "BLOG2015" to save 12.5% on anything and everything in our shop!