What Makes Brazil The Greatest Soccer Nation in the World?

The Brazilian national soccer team was established in 1914. They are one of the most successful teams in the world. 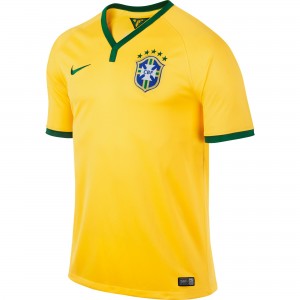 the Brazilians perfected it".

Brazil soccer jerseys are sold around the globe to American, African and European supporters who favor the Brazil team alongside their own counties squad. You can shop for yours now at Soccer Box!

The yellow, blue and green colors that are famously associated with the Brazil soccer jerseys home team kit were not the team's original colors. To begin with the team wore white and blue kits.

In 1950 after losing in the World Cup finals at home in Brazil the colors were deemed unpatriotic.

A competition was launched by a local newspaper for a new design of kit that was based on the colors of the Brazilian national flag.

The all yellow shirt features green trim on the V shaped neckline, instead of finishing at a point additional green trim creates a short placket giving an unusual and stylish finish.

When launching the kit the team's manager Luiz Felipe Scolari stated 'the shirt looks great, it's only missing a 6th star'

The right side of the chest features the Nike logo embroidered in green, on the left is the Brazil crest.

Sitting above the crest are 5 green stars. These stars represent the 5 occasions that Brazil has had the prestigious honor of winning the World Cup.

The Brazil Home Soccer Jersey will be worn next summer by the Brazilian squad as they aim for their 6th win.

In the 1950 tournament there was no official final match, instead playoffs between the final 4 teams decided the winner.

The top teams were Uruguay and Brazil, it is commonly stated that the team wearing the Brazil soccer jersey lost 2-1 in the final as that was the score in 1 of the last games to be played.

Following this disappointing loss at home Brazil have gone on to show their soccer prowess and notch up 5 World Cup wins, more than any other team.

It would be a momentous and extremely special occasion if they can overcome past troubles and we can watch the players wearing the Brazil soccer jersey lift the trophy at home in the Maracana Stadium next summer.

As hosts the team that wear the Brazil soccer jersey benefited from automatic qualification into the finals of the 2014 World Cup. Their recent form has put Brazilian side as firm favorites to win the tournament.

Of their last 19 matches they have only lost twice. As a prelude to the big event summer 2013 saw Brazil host the confederations cup in which they have been reigning champions since 2005.

The Confederations Cup is held every 4 years and is contested between the winners of each of the FIFA confederations championships in addition to the World Cup holder and the host of the next tournament.

It is generally held the year prior to the World Cup as part of the build up to the event.

The team that wear the Brazil soccer jerseys have won the last 3 tournaments.

The team won the 2013 Confederations Cup; they played 5 games and put on outstanding show winning all 5.

They beat current World Cup holders Spain 3-0 in the final match of the tournament.

This crushing defeat has raised many questions over whether the top ranked team in the world according to FIFA can beat the mighty Brazilians on home turf to retain their title.

Brazil is a strong team and under Scolari's management with the support of their home crowd is tipped as firm favorites to gain their 6th World Cup star.

This top sports tournament will be watched by millions of fans around the world as soccer returns to the vibrant country of Brazil.

The Brazil 2014 FIFA World Cup Home Soccer Jersey will be worn by fans around the globe as World Cup fever takes hold!

Which team would you like to see win Brazil 2014?

Get Prepared And Shop For Your Brazil Soccer Jersey Now While Stocks Last.