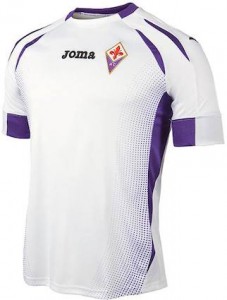 ACF Fiorentina has not won a championship title in Italy's Serie A since all the way back in the 1960s and hasn't even landed a runner-up slot since the 1981 1982 season. However, neither of those facts reflects on the quality of the club as it stands today, and truthfully, Fiorentina has remained one of the most consistent, resilient, and all around best teams in all of Italian soccer. And now, with yet another new season of Serie A play in the offing, you can celebrate the legacy of this wonderful team with a new Fiorentina football shirt from Soccer Box!

The new Fiorentina away jersey 2014 2015, available now on Soccer Box, is an appealing football kit because it encompasses elements of both classic uniform design and modern aesthetic taste. The color scheme is fairly standard, as the jersey is white with purple trim. With that said, kit designer Joma has added a bit of pizzazz to this particular shirt, with purple dots that pattern and fade on both sides of the shirt. It's a great look, and you'll love it as much off the field as the players do on it!

Like with other soccer leagues around the world, Serie A will shortly be commencing play for the 2014 2015 regular season. The looming start date sent Fiorentina fans back to last season, to analyze and reassess the Florence team's strong performance.

And indeed, last season did see a strong performance from AFC Fiorentina. While the team ended up in fourth place on the Serie A table, behind perennial league champions Juventus, as well as Roma and Napoli, Fiorentina still had a commanding lead over every other team on the table.

All told, Fiorentina ended the 2013 2014 season with a record of 19 wins, 8 draws, and 11 losses, scoring 65 goals and allowing 44 along the way. It's not a faultless record, and Fiorentina still has some work to do before the team will be able to measure up to last season's stunning Juventus record (33-3-2). However, the record was enough to mark the Fiorentina football shirt as the garb of one of the best teams in Italian football.

Undoubtedly, fans are hoping that this year's Fiorentina squad will perform similarly well. Players will have their work cut out for them during the team's opening match, an August 30th away fixture against Roma. After all, Fiorentina lost both of its fixtures against Roma last season.

Still, even if Fiorentina is to face a dangerous foe in its first game of the season, fans will simply be glad to be back, wearing the Fiorentina away jersey 2014 2015 and cheering for their team. Should Fiorentina manage a victory, somehow, spirits among Florence football fans will hit a new high, but even a loss won't dampen those spirits much.

Fiorentina's season prospects will improve after the Roma opening match. Week two will pit the team against Genoa, a middle-of-the-pack Serie A competitor, while week three will bring Atalanta, a team that Fiorentina beat twice last season, in twin 2-0 matches.

As if reading about upcoming fixtures wasn't enough to make you want to buy a Fiorentina away jersey 2014 2015 from Soccer Box, taking a look at the team's squad for the year should do the trick. While Fiorentina isn't known for having many superstars on its squad, the club's current line-up is nevertheless a good one.

Mixing old veterans, recent breakout stars, and complete newcomers, the squad for AFC Fiorentina this year strikes a balance between seasoned experience and unbridled talent. On the "experienced" end of the spectrum is team captain Manuel Pasqual, who is about to begin his landmark 10th season with Fiorentina. Juan Cuadrado, meanwhile, is the breakout star, a player who has been a winger with Fiorentina since 2012, but who ascended to new fame this summer when he scored a goal and made four assists for the Colombian national team.

Finally, Steve Leo Beleck is among the team's more untested talent, a 21-year-old striker who has been signed with Udinese since 2010, but who has been loaned to five different teams in that time. With a consistent place on any one team, Beleck may have what it takes to become a true scoring titan, and officials are undoubtedly hoping that's what he'll do at Fiorentina.

Whether you want to root for the veterans, the breakouts, or the newcomers, you can do it with a Fiorentina football shirt from Soccer Box!