Euro 2020 cancelled, the Premier League football across Europe suspended with no certainty of the season being concluded. Who could have predicted this is the situation we would find ourselves in in twenty-twenty? Of course, in comparison to the global situation the cancellation of some football games isn’t that important. But it does have a wider implication not only for the sport itself, but for the economy, for businesses who rely on football to make a living as well as on the mental health of players, coaches, technical and admin staff as well as supporters around the world.

How Coronavirus Has Impacted Football

Massive disruption, and countrywide shut-downs are happening around the world, to prevent further spread of Covid-19. Covid-19 commonly referred to as Coronavirus originated in China in December 2019, has spread to every continent since. Coronavirus is a viral infection, that causes a range of symptoms primarily in the respiratory system that can range from very mild to deadly. The most alarming feature of the virus is the speed of spread and the amount of people being infected globally.

Governments around the world have taken drastic measures to try to slow the spread of the virus and protect the most vulnerable. In terms of football this has meant suspending leagues, such as the Premier League, La Liga and Bundesliga, European tournaments such as the Champions League are also on hold, and the Euro 2020 tournament has been postponed with a plan in place to reschedule for 2021. It is not just major leagues that are cancelled though, the majority of grassroots football is also suspended with the safety 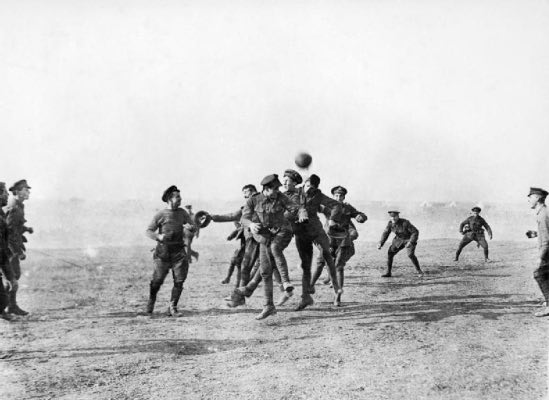 of participants in mind.

Football has been a consistent part of culture in the United Kingdom, but also around the globe for all of living history. The English Football League was established in 1888 and has grown from just 12 teams to begin with, to today being a huge industry worth millions of pounds to the economy.

Since 1988 there has been an annual football league in all but ten years. From 1915-1919 the league was suspended because of World War I, and from 1940-1946 for World War II, the 1939/40 campaign was abandoned due to the breakout of war. The lack of precedent for such a situation, means that there are a lot of unanswered questions throughout the industry.

Even in war time football was played. Famously in 1914 English and German soldiers played football in no man’s land. Football was in fact an important part of life for many people during World War II, with some matches still taking place and as a form of recreation in communities, you can find out more about this here.

Currently, mass gatherings are cancelled, social distancing is being advised in some countries and strictly enforced in others. Without the entertainment of football and other sports both as an activity or as a spectator many people’s physical and mental health may suffer. There is no precedent to this, it may seem trivial, but the loss of football, the loss of camaraderie for fans, the loss of live sport on TV for the older generation will no doubt have a major impact for many people.

Premier League football is not only popular in England but also around the globe. Since its inception the Premier League has been played every year. As mentioned above the English football league was abandoned once before in the 1939/40 campaign, meaning it may happen again for the 2019/20 season, but would that be the right thing to do? 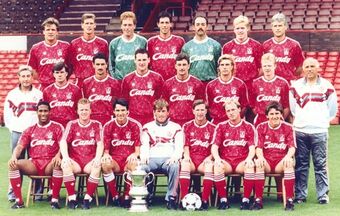 Liverpool football club are currently top of the 19/20 Premier League table. Liverpool FC has won the top-flight of English football on 18 previous occasions, but not since 1990, meaning that they have never won the Premier League. They have finished in 2nd place on four occasions including in 2018/19. This season was odds on to be Liverpool’s year to finally lift the prestigious Premier League trophy, so what will happen?

The short answer is nobody knows. Most Liverpool fans, and many in the football community, as well as the world in general, will be hoping that Coronavirus is short-lived, that life can get back to normal and play can resume, so that the season can be concluded in its entirety. However, if that is not the case will a winner be declared? No winner was declared in 1940, however the stakes weren’t quite so high then.

Football today has evolved into big business, involving huge amounts of money, with big prizes for winning teams, as well as sponsorship, kit manufacturing and TV broadcasting deals to consider. Liverpool currently stand at 82 points with 9 games left to play meaning that there is 27 points still up for grabs. Their closest competition is Manchester City who have 57 points. With a 25-point lead at this stage, it is practically a given that Liverpool will win the league if it is played.

After waiting all these years and coming so close on four previous occasions, it will be a bittersweet victory for Liverpool football club and their fans to win in such circumstances.  Rival fans may mock the victory in years to come. But, is the prospect of the league being cancelled with no winner a better option? Not really, it has been thirty years since Liverpool last won the top-flight, and next season could be anyone’s game, there would be no guarantee of a fair Premier League win for Liverpool any time soon. Show your support to the red’s we still have Liverpool kit available to purchase in our online store.

UEFA has given clear guidance on what is happening with Euro 2020, even giving proposed dates for the competition to be played in 2021. With this particular edition of the European Championship scheduled to take place across multiple countries throughout Europe UEFA really had no option but to immediately postpone.

UEFA has put forward the dates 12th June 2021 to 12th July 2021, which is exactly 1-year forward from the dates that Euro 2020 were due to be played. However, the women’s competition is scheduled to begin on July 7th, 2021.  We will have to await more announcements for clarity over both competitions. With the growth of the lady’s game, it is likely that both tournaments will go ahead, but the women’s Euro 2021 may be played slightly later or at a different time of the year.

Another question many businesses and fans will have is regarding Euro 2020 football kits. Will the kits already released still be used for Euro 2021? Will the football kits due to be released over the coming weeks be held back? Will launches happen as scheduled and more new designs be released for Euro 2021? The answer to all of these questions is currently unknown, but as we find out we will keep you informed. Sign up to our newsletter to get all the latest news delivered straight to your inbox.

With so much uncertainty surrounding not only football but all aspects of life, it is important to maintain normality as much as possible. There might not be any current games, but why not see if you can find past games to re-watch online, check out your favourite clubs on social media they will be sure to keep posting and engaging with supporters.

You can of course still shop the latest kits at Soccer Box for home delivery, we have some great special offers on at the moment. If you have a garden you can got out for kickabout with your immediate family, this would be a great way to stay fit. You could even practice skills inside your home if you have a smaller skills ball. Look us up on social media and tell us what you are doing to keep football as a part of your everyday life as much as possible during this difficult period.