Why Arsenal Football Kits Make a Great Gift for any Young Gunner!

Arsenal is a Premier League soccer team. They are often referred to as the 'Gunners', this nickname derived from their crest that originally featured images of 3 canons but has evolved into today's modern design featuring only 1.

They are a successful club having gained the record for longest uninterrupted period of playing in the top-flight.Â 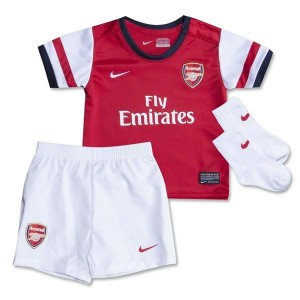 Arsenal football kits are available for kids and adults that support this top club.

The current Arsenal soccer strip is manufactured by Nike, they produce a great range including the jerseys, shorts, socks, training wear and Arsenal football  kits for kids.

From the 2014 - 2015 season Puma will be taking over the manufacture of the teams kits after a 5 year deal was announced in May.

The deal is worth £30m per year and at the time of signing was the biggest in the Premier League.

Making a product for every member of the family the Arsenal Baby Home Soccer Kit 2012 - 2014 is available for the tiniest of supporters.

Manufactured by Nike this great value set contains the shirt, shorts and socks for 1 bargain price.

The design is the same as worn on the pitch by the team's players with slight alterations such as neck poppers making it more comfortable for baby to wear.

As well as being one of the most successful teams Arsenal is extremely popular with soccer fans.

Supporters around the world clamor to get hold of the team's kits as they want to show their loyalty and support for the players and team.

Recent statistics released by Nike show that 800,000 replica shirts and Arsenal Baby Home Soccer Kits have been sold per year for the past 5 seasons making them Nike's 3rd best seller behind Manchester United and Barcelona.

With Christmas nearly upon us why not consider one of the Arsenal football kits for kids as a special gift for your child. The complete kit sets are available for babies from 3 months up to kids aged 8.

The separate team jerseys, shorts and socks start at size XSB designed to fit a 6-8 year old up to adults XXL size. There really is a Gunner shirt for the whole family, shop for yours while stocks last at Soccer Box.

Football kits for kids are available not only for Arsenal but a wide selection of Premier League teams, as well as national sides and some La Liga teams.

Supporting and playing soccer are great hobbies for your kids to participate in with other children their own age as well as a family activity.

Getting them their very own kit is a great way of encouraging their continued interest.

Supporting a soccer team is a fantastic hobby. As a family you can cheer on the team watching the game, your child wearing their kids football kit.

This is great way of spending family time and enjoying each others company, even if you support different teams!

It will give your child something to chat about with their friends encouraging social interaction and development.

If your youngster wants to join a local or school team and play soccer getting them a football kit for kids and encouraging them to join in has a whole range of health and developmental benefits.

Many children are classed as overweight and do not meet the governments recommended guidelines of 1 hour of physical activity per day.

Playing football is a fun way of getting active and staying fit.

Other benefits of playing soccer include development of coordination and balance. As a team sport, team working and listening skills are enhanced.

It can also boost concentration skills that will help in your child's education as well improving self-confidence. Get a football kit for your kids and encourage them to take up this popular sport.

Whether you are buying the Arsenal Baby Home Soccer Kit for the tiniest member of your family or a kit for an older child it is sure to be a much appreciated gift.

As a young Gunner your youngster may also like to have their shirt personalized with the name of their favorite Arsenal player or their own name. This service is available at Soccer Box for your convenience.

Have you noticed any other benefits from your child joining a football team?

Do you think the Puma kits will be as good as the kits Nike make for Arsenal?

Get All Your Football Kits For Kids Including The Arsenal Baby Home Soccer Kit 2012 - 2014 From Soccer Now.