Footballers to of Played Under Both Klopp and Guardiola

Recent seasons has seen football managers Jurgen Klopp and Pep Guardiola go head-to-head in the English Premier League, with their clubs Liverpool and Manchester City respectively. Both Klopp and Guardiola are considered within the ranks of best modern-day football managers. There is a small but elite group off footballers that have been lucky enough to play under both of these football management greats. Below we will take a look at both Jurgen Klopp and Pep Guardiola giving a brief history of their management and major successes. We will then go on and look at each of the four players to of played under both managers. 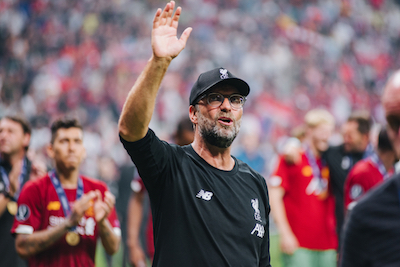 Klopp is a German football manager; he spent most of his playing career at Mainz 05, but it is as a manager that he has made his name in the game. To date he has managed three clubs – as listed below:

Jurgen Klopp is widely regarded as one of the best football managers in the world. He is known for utilising an approach known as ‘Gegenpressing’. Gegenpressing is a high attacking approach to football; in which, when the ball is lost the players immediately attack to regain possession; as opposed to regrouping. Some commentators have described Klopp’s style as ‘heavy metal’.

Whether you enjoy the attacking style of teams that play under Klopp, there is little to doubt his success. Both in the Bundesliga and Premier League he has made his mark, and as he refines his management approach the stats get more impressive. At Mainz 05 his win rate was 40.4%, increasing to 56% at Borussia Dortmund and currently stands at 60.5% at Liverpool.  His success can also be shown in the number of trophies won under his management.

It should also be noted that Liverpool FC have never won the Premier League title, but under the management of Klopp it seems that the trophy is theirs for the taking. The 2018/19 season saw Liverpool miss out to Guardiola’s Man City by a single point. As it stands in 2019/20 Liverpool are 25 points clear at the top; Man City have a game in hand meaning that there are 30 points up for grabs.

However, with the current Coronavirus pandemic, and suspension of the football league it is unclear whether the remainder of the season will be played in full. The industry and fans alike are hoping for play to resume in mid-June behind closed doors. Mathematically Klopp’s Liverpool need two wins, one if City lose, to secure the title this season. With those odds it is likely that the clubs Premier League drought will be over, and they will be crowned Premier League champions 2019/20. 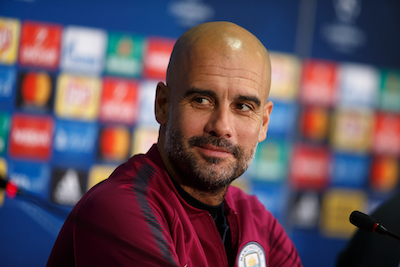 As a manger, Pep Guardiola has led teams to success in three major European football leagues. Below we list out the team’s he has managed and for what periods.

On the pitch Guardiola was a midfielder; he was known for his creativity, ability to read the game, and hard-work ethic; a true playmaker and with excellent technical ability. As a manager, Guardiola’s style has evolved. At Barcelona he often utilised a 3-4-3 approach, and implemented the six-second rule, which involved the team pressing to re-gain possession for the first six-seconds after losing it.

High pressing is an increasingly dominant approach in football; Guardiola has developed this by training his defenders and goalkeeper to be confident on the ball and retaining possession. He has also ensured to recruit goalkeepers with the force to kick the ball the length of the pitch; this has allowed his squad to work the opposition and the rules of the game to their benefit to create numerous scoring opportunities.

Results speak; and there is no doubting the management calibre of Pep Guardiola when we look at the number of winning trophies, across three major leagues, that have been secured by squads under his management.

Players to Have Played Under Both Managers

It is clear that both Jurgen Klopp and Pep Guardiola deserve their place as being named among the best football managers of all time. Both men have crossed paths frequently managing teams in the same league; notably both were Bundesliga managers between 2013 and 2015, and both currently manage Premier League clubs. However, in terms of footballers to play under both managers the list is surprisingly small. There are four players to have been fortunate enough to spend time under the tutorage of both Klopp and Guardiola – these are as follows:

We will look at each of these footballers, and their time under each manager in more detail below. 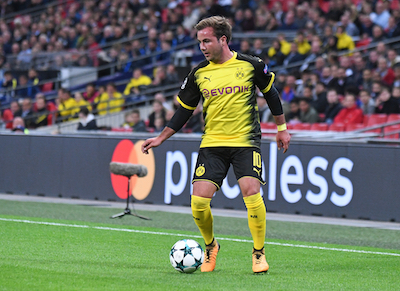 Gotze is a German footballer; he has spent his entire career to date playing in the Bundesliga and has split his time between the two biggest clubs in the league; Borussia Dortmund and Bayern Munich.

Mario Gotze is a product of the Borussia Dortmund academy, where he started his career at just 8-years old. It was Klopp that gave him his promotion to the first team in 2009; by 2010/11 he was an integral member of the squad. In that season BVB won the Bundesliga and commenters were suggesting that Mario Gotze was one of the best ever German footballers.

In 2012 Gotze signed a new deal with Borussia Dortmund that should have seen him remain at the club until 2016; however, the contract contained a €37 million release clause. Bayern Munich triggered the release clause in April 2013, and he subsequently moved to FC Bayern under the management of Pep Guardiola for the start of the 2013/14 campaign.

It seems that Guardiola had his heart set on acquiring Gotze; and acquire him they did, much to the disappointment of Klopp. Gotze wore the Bayern Munich football shirt for three seasons, helping them to secure the Bundesliga title in each.

However, Mario Gotze has since said that he regrets his decision to leave Borussia Dortmund. He has stated that he found it difficult under Guardiola, whose management style is more focused on the pitch whereas he has described Klopp as a ‘footballing father’. Gotze returned to Borussia Dortmund in 2016 where he has remained.

As of 23rd May 2020, it has been announced that Gotze will leave BVB at the end of the season on a free transfer. It is known that Klopp would have liked to get him to Liverpool, could a stint in the Premier League under his favourite manager be next on the cards? 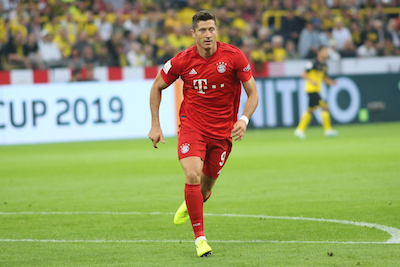 Lewandowski is a Polish footballer; he began his senior career in Poland before moving to the Bundesliga where he has played under both Klopp and Guardiola.

Playing in the Polish football league for the early part of his career; Lewandowski quickly became recognised for technique and excellent finishing ability, drawing the attention of clubs from the major European leagues. Upon joining Borussia Dortmund, under the tutorage of Jurgen Klopp, Lewandowski’s talent was nurtured and further developed. He became an influential member of the squad; and was integral to their two Bundesliga wins and Champions League final spot during his time wearing the yellow and black Borussia Dortmund jersey.

Controversially, in 2014, Robert Lewandowski made the move to BVB’s biggest rivals Bayern Munich; on a free transfer. At FC Bayern Pep Guardiola was already in situ as manager, and under his influence Lewandowski has developed even further. Playing under Guardiola in the 2014/15 and 2015/16 campaigns, Lewandowski scored a total of 67 goals from 100 appearances; and also lifted to Bundesliga trophy in both campaigns as well as the DFB-Pokal in the later.

Similar to Gotze, Lewandowski describes Klopp as ‘adopting the role of a dad’ who nurtured him into the star footballer he is today. Of Guardiola, Lewandowski says that he ‘makes almost every player better’, and alludes to his almost obsessive, round-the-clock, football focused thinking.

Lewandowski remains at Bayern Munich, where he has continued to excel despite numerous managerial changes since the departure of Guardiola. Transfer rumours are often in circulation regarding his future; however, at the current time it seems unlikely that Lewandowski will link back up with either Klopp or Guardiola in the near future. 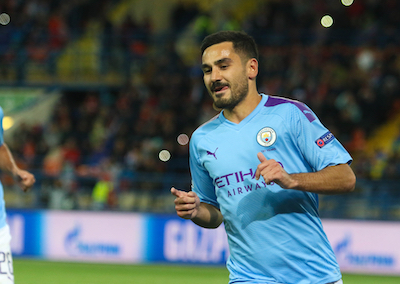 Gundogan is another German footballer, that has been fortunate enough to play under two of the best managers in football history; Jurgen Klopp and Pep Guardiola. We list the clubs he has played at, in his senior career, to date below:

Ilkay Gundogan’s career truly started to progress after joining Borussia Dortmund, where Klopp was already in situ as manager. During his six seasons with BVB he helped them secure the Bundesliga and DFB-Pokal double in 2011/12, as well as a place in the Champions League final in 2012/13. Of Jurgen Klopp. Gundogan has described him as ‘knowing how to deal with his players’, and he also pointed out Klopp’s exceptional motivational skills.

In 2016, Ilkay Gundogan made the move to the English Premier League and Manchester City; he arrived as the first signing to be made under new manager Pep Guardiola. Despite some injury struggles, Gundogan has excelled further under Guardiola helping the squad to secure two Premier League titles, an FA Cup, three EFL Cup trophies and a Community Shield.

Gundogan has described Pep’s personality as ‘charismatic’ and that his unwavering focus means that you always give your best. Gundogan extended his contract to wear the Man City shirt for a further four seasons, as of August 2019; Guardiola often utilises Ilkay in a variety of midfield roles, and he has frequently been praised for his ability to create space and assist the performance of his teammates. 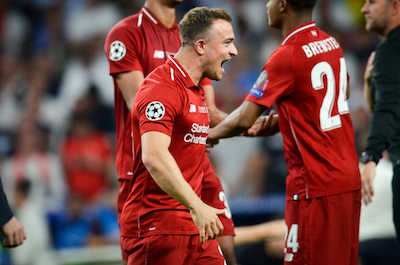 Shaqiri is Swiss footballer; he plays as winger, and has a reputation for netting surprising goals, being good with both left and right feet. He has been referred to as ‘the magic dwarf’. His career has been varied with stints in the Swiss top-flight, Bundesliga, Serie A and Premier League. Xherdan Shaqiri completes our list of the four footballers to have played under both Jurgen Klopp and Pep Guardiola.

Pep Guardiola arrived in Xherdan Shaqiri’s second season at Bayern Munich. His first season there saw him make 39 appearances. However, he wasn’t a favourite of Guardiola and the next two subsequent seasons saw his appearances reduce to 27 and 15 respectively. Of this Shaqiri has said that Guardiola was a good coach on the pitch, but his communication was poor. Deciding to move on he made the transfer to Inter Milan in January 2015; after playing just 1 and a half seasons under Guardiola.

It was not until 2018 that Shaqiri, making the move to Liverpool, met up with Jurgen Klopp. He was a regular in the 2018/19 squad helping them to secure the prestigious UEFA Champions League trophy, in addition to the Super Cup and FIFA Club World Cup, while sporting the iconic red Liverpool jersey.

Of Jurgen Klopp, Xherdan Shaqiri has been nothing but complimentary. He has noted Klopp’s open nature, and also said that he understands himself and his role within the team under his management. Klopp has given Shaqiri the belief that ‘anything is possible’ and it does seem that the 2019/20 Premier League title is in the bag for Liverpool despite the worldwide uncertainty of the Covid-19 pandemic.

Klopp & Guardiola Among the Best Ever Football Managers

From the four players to have had the privilege of playing under both Jurgen Klopp and Pep Guardiola, it is clear that despite both being rated as one of the best ever football managers their styles are completely different. Klopp is personable and nurturing, whereas Guardiola is focused and blunt. Their different styles suit different footballers differently! And where some have excelled under one or the other, the opposite could be said of others.

Which of these two football managers would you most like to play under? Look us up on social media and tell us why?