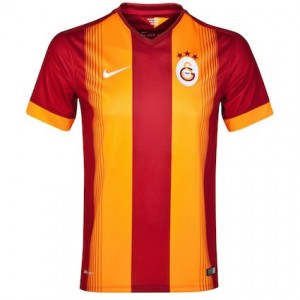 This season, Galatasaray SK is campaigning for its 20th title as Turkey's national football champion. The campaign will play out in the Turkish Super Lig, and this year's new Galatasaray kit is now available for purchase to mark the occasion.

At Soccer Box, we have stock of the new Galatasaray jerseys, including the Galatasaray home jersey 2014 2015, readily available. The shirt is a striking new design for the Galatasaray club, with alternating vertical stripes of red and orange-tinged yellow. The jersey will be worn throughout the upcoming season at all Galatasaray fixtures that are scheduled at the team's home ground of Turk Telecom Arena.

So far, Galatasaray's campaign for a 20th Turkish football title is moving along quite nicely. The club won its first fixture of the season, an away match against Bursaspor, with a resounding 2-0 performance.

Bursaspor itself is a solid team, one that landed in eighth place on last year's Super Lig table. During this opening match, though, the players in the Galatasaray kit were thoroughly dominating the conversation, with Galatasaray striker Burak Yilmaz and midfielder Olcan Adin scoring the goals that put their team on top.

Galatasaray's squad did not perform as well on the season's first return to the Turk Telecom Arena. After donning the Galatasaray home jersey 2014 2015 for a home match against Eski?ehirspor, Galatasaray's offensive players couldn't find the back of the net, resulting in a match that ended scoreless for both teams.

But while matches against teams like Bursaspor and Eski?ehirspor are an inherent component of the Super Lig season for Galatasaray players, they are not the matches that fans of the club are most looking forward to.

That title instead goes to a match that is currently scheduled for October 18th. The fixture will pit Galatasaray against their biggest competition for Turkish soccer glory: Fenerbahce. Galatasaray players will wear the Galatasaray home jersey 2014 2015 for the match at Turk Telecom, which will be the first Super Lig meeting of Galatasaray and Fenerbahce this season.

The October 18th match is expected to be a contentious one for numerous reasons. Not the least of these is that Fenerbahce is currently the Super Lig's defending champion.

When all was said and done, the 2013 2014 season saw Galatasaray landing in second place on the Super Lig table, with 18 wins, 11 draws, and 5 losses. Fenerbahce, meanwhile still won the season handily, with a record of 23 wins, 5 draws, and 6 losses.

In addition to giving Fenerbahce temporary Super Lig bragging rights, the win also marked the team's 19th title as Turkey's national football champion. Since Galatasaray also has 19 national titles-a record for Turkish football-the current season stands as something of a high-stakes run to see which club will be the first to 20.

It is highly likely that the 2014 2015 Super Lig will end in favor of either Galatasaray or Fenerbahce. Before Fenerbahce clinched a 19th title last season, Galatasaray had won the previous two seasons (2011 2012 and 2012 2013) and Fenerbahce had won the season before that.

In fact, no other club has won the Super Lig title since the 2009 2010 year, when Bursaspor clinched the division for the first time. However, considering the fact that Galatasaray manhandled Bursaspor in that first match of the season, it's not likely that the 2010 champs will be much of a challenger this year.

That means that Galatasaray and Fenerbahce will not only be battling for the title. They won't even just be competing for bragging rights for which team reached 20 wins first. Instead, the two teams will be dueling for the right to add an extra gold star to their respective team jerseys. The Turkish star system for soccer allows one star for every five title wins, and both Galatasaray and Fenerbahce would reach four stars with a win this season.

Do you think that Galatasaray will be reaching a fourth star next spring? If so, grab a Galatasaray kit from Soccer Box today, to help support the team.