The great African footballers from Ghana are a relatively new contender in the world of international soccer, but the Ghana soccer jersey is quickly becoming a fixture as one of the brightest rising national teams. Known to their fans as 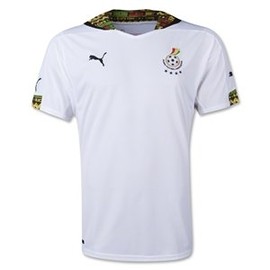 the Black Stars, the premier soccer team from Ghana is once again headed to the World Cup this year, marking their third ever qualifying season.Â  Their relatively short tenure in the FIFA World Cup may come as a surprise to those who have taken a glance at the teams record, as Ghana is easily one of the most decorated African national football teams.

The Ghana 2014 FIFA World Cup jersey is a stark minimalistic piece of quality football apparel from Puma. Designed in collaboration with artists from the Creative African Network , the Black Star's World Cup kit is as stylish as you'd expect from a top flight national team. You can score your own Ghana fan gear from Soccer Box, your one stop shop for all your favorite official national team gear.

Hailing from the small African republic, these rising stars of African football have mimicked the exponential growth of their home country in the realm of international football. Though they may still be new to the World Cup, the Ghana national team is the oldest African national team, dating back to the 1920s. Since then, Ghana has laid claim to the African Cup of Nations title a total of four times before bursting onto the World Cup scene in 2006.

Though they didn't make it far in their inaugural World Cup appearance, Ghana had already made a name for itself by going completely undefeated in their 2005 season. At the next World Cup, Ghana shocked the international football community by making it all the way to the quarterfinals. Now they're back and ready to don their Ghana 2014 FIFA World Cup jersey and show the world just how much they've improved since 2010.

Speaking of improvement, even FIFA officials are taking note of this rising Black Star. Ghana was awarded the "FIFA most improved team of the year award" in 2005; no easy task for a team that had gone relatively unnoticed in intercontinental circles. Fans of the team are rife with anticipation for the 2014 games to kick off in June, but will Ghana's Black Stars kick, pass and score their way to international infamy, or dim under the pressure of the mounting competition.

Fans may be fond of calling the Ghana national team by their nickname, "The Black Stars", but they certainly are no dark horse team. Since their first World Cup appearance, Ghana's national team has enjoyed soaring match attendance numbers due to the viral growth of their fan base. It would seem that Black Star fever has made its way outside of Ghana as well, with some 700,000 fans tuning in to their matches from all over the globe.

You can expect to see some Ghana fans in Brazil this summer if not sooner, proudly boasting a Ghana 2014 FIFA World Cup jersey and eagerly awaiting their team's kickoff match. You could say that the underdogs from Africa have gained a bit of momentum since their last World Cup appearance, as they have been featured in a number of books and films in recent years.Â  It would seem that all the hype surrounding this tiny African nation's soccer team could be true, but we'll have to wait until the 2014 World Cup tournament kicks off in June to see if the Black Stars will live up to fan expectations.

The Ghana national football team needs all the support fans can muster in their next bid for international football superstardom. Show your team spirit with a Ghana soccer jersey, in stock and ready to deliver to you in time for the 2014 FIFA World Cup. Soccer Box is a one-stop shop for all your favorite team's official merchandise, so be sure to pick up enough for the whole family.