The Rangers have been dynamite this season-to the point where some expert football analysts might just be ready to call the Scottish Championship in their favor already. Glasgow have won all eight games they've played so far this fall. Considering the 36-match length of an annual Scottish Championship campaign, that statistic means that the Teddy Bears are more than one-fifth of the way to a perfect season and promotion up into the top-flight of Scotland's football system.

An undefeated season would be good for any football club, at any time of the year. For the Glasgow Rangers, though, their 8-0-0 performance so far in the 2015 2016 Scottish Championship is especially 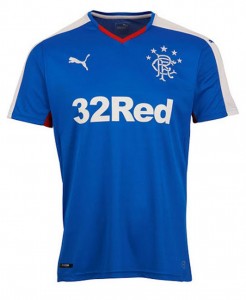 notable considering that there are no close challengers in the league.

Indeed, the Rangers' eight wins put them at the top of the Championship standings table, with 24 points. They've also scored 28 goals in those eight games while only allowing four-yielding an impressive goal difference of +24.

In comparison, the second-place soccer club in the Scottish Championship right now-Falkirk FC-have won four games and drawn three. That record earns Falkirk 15 points in the standings. Also with 15 points are the Raith Rovers, though they are in third because their goal difference (+1) is lower than Falkirk's (+4).

These numbers prove that the Rangers aren't just dominating the Scottish Championship right now, but completely destroying every other team in the competition. It's also worth noting that, on Saturday, the Glasgow Rangers will play Falkirk-the one club left in the league they haven't already played and beaten-in a home match. Bottom line, it's very unlikely that anyone is going to be able to keep the Teddy Bears from the top of the Championship table this year.

Even if Falkirk can manage a win or draw against Glasgow on Saturday, that won't dampen the club's title hopes substantially. The Rangers have enjoyed a three-point average margin of victory in their league matches this fall, and have scored five goals in three of their eight games (Raith Rovers, Queen of the South, and Alloa Athletic).

25-year-old attacker Martyn Waghorn has been steering the ship for the Rangers this season. The striker transferred to Glasgow over the summer from lower-tier English club Wigan Athletic, for a fee of £200,000. The Teddy Bears have arguably already gotten their money's worth with Waghorn, who has scored an astonishing 11 goals in the first eight games of the season-including three braces and one hat trick.

To put Waghorn's 11-goal tally in perspective, consider this: last season, the top scorer in the Scottish Championship was Hibernian's Jason Cummings. He scored 18 goals in 33 appearances. If Waghorn continues his pace for the rest of the season, he could potentially get near the 50-goal mark by the end of the season-obliterating what Cummings did a year ago.

Also, consider that Waghorn isn't just the top scorer in the Scottish Championship right now, but he's also scored more goals by himself than any other team in the league has. That's not a joke: Falkirk and Raith Rovers have tallied 10 goals each in the first eight games of the season.

Add the fact that the second and third most prolific scorers of the 2015 2016 campaign also play for the Rangers (defenders James Tavernier and Lee Wallace, each with four points to their names) and it's pretty clear that Glasgow have every other team in the second division outgunned this year.

Will Waghorn and his cohorts be able to return the Teddy Bears back into the Scottish Premier League-a goal they've been chasing since they declared bankruptcy in 2012? We'll have to wait until next spring to find out. The good news, though, is that the Rangers look like they are going to put on a great show in the interim! Pick up a Glasgow Rangers shirt 2015 2016 from Soccer Box to root for the football club.