With just two games left to play the Granada La Liga relegation battle 2015 is on! Granada CF are sitting just inside the relegation zone, at 16th place. The question is, can the football club still avoid relegation? Or are they doomed to play the 2015 2016 season in the Segunda Division? Cheer for the team today, by purchasing a new Granada football shirt from Soccer Box today!

At Soccer Box, we still have stock available of the Granada home jersey 2014 2015. This stunning jersey from Joma features a snug V-neck design, with red and white striping and splashes of blue trim. Buying and wearing the home jersey for the last two weeks of Granada's 2014 2015 campaign is the perfect way to support the soccer squad and help them battle relegation.

In other words, the wearers of the Granada football shirt are not-and have never been-a top-ranked team in Spanish football. The club have never won a La Liga title. Their best-ever year in the top-flight division was all the way back in 1972, when they ended the season in sixth place.

Still, simply competing in the Spanish La Liga has been the team's badge of honor over the past four years. Prior to 2011 2012, the Nazaries hadn't played in the top-flight since 1976. They were relegated that year, following a 17th place finish, and ultimately fell all the way down to the fourth tier of Spanish football in the middle of the 2000s. It wasn't until 2009 that Granada seemed to find their way, after which they climbed from the third tier to the premier division in the space of three seasons.

Still, the 2014 2015 La Liga has been a struggle for both the players and the fans in the Granada home jersey 2014 2015. The Nazaries have only won six games this season-half of what they won last year. 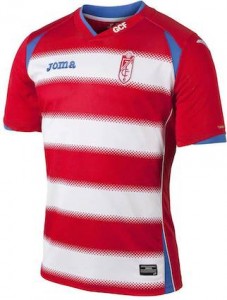 The good news is that there are a lot of other soccer clubs that have similar totals in the La Liga standings. Levante, Getafe, Almeria, Deportivo La Coruna, Eibar, and Granada are all within five points of one another on the league table. 31 is the low end for that group, while 36 is the high. Therefore, the Granada La Liga relegation battle 2015 is a battle worth fighting, and one that Granada can feasibly win. Wins in the final two matches would give the Nazaries good odds of leap-frogging teams with similar point totals, like Deportivo or Almeria.

Granada CF are clearly working hard to escape the danger zone, too. With wins against Getafe (on May 3rd) and Cordoba (on May 9th), the Nazaries are currently riding high on their first consecutive pair of victories for the season. This soccer squad has more momentum right now than they've had all season, and they are absolutely peaking at the perfect time.

Not that Granada will have an easy time closing out the season with two more victories. They have a decent chance of beating Real Sociedad this weekend, in a May 17th away game. However, their season-closing match-a May 23rd home game against Atletico Madrid-will be a substantial test. Atletico has certainly been weaker in 2014 2015 than they were last year, but they are still one of the best teams in Spain.

Pick up a Granada shirt to root for the team in that big, decisive home match. After all, the game could determine whether the Nazaries spend their 2015 2016 campaign in La Liga, or return to the Segunda Division after a four-year absence. You can also follow Soccer Box online, to keep up with the latest football news-including up-to-the-minute La Liga action! Find us on our social networks, including Twitter and Tumblr.