Being the only soccer team to play continuously in every Serie A tournament, there is no doubt about it that Inter Milan is a very popular club worldwide. And with their signature blue and black colour scheme, their jerseys are definitely a favourite with fans of football. Therefore within this article we are going to take a look back in history to discover how Internazionale got their classic colouring and how it has evolved throughout the years. Exploring partnerships with various manufacturers, there are most certainly good and bad jerseys worn by the players. So take a look through this article today to learn more about your favourite squad’s kit.

Ever since the club was first established in 1908 the club has donned black and blue stripes on their home kits. And it is rumoured that this colour scheme was chosen to signify the night and the sky. They continued to wear this colouring throughout the WWII and eventually gained their nickname ‘Nerazzurri’ meaning the black and blues.

However, they were forced to discontinue the use of their infamous colour scheme for the period of time where the Fascist party ruled. This was because they were merged with Unione Sportiva Milanese to form Societa Sportiva Ambrosiana. And the new club then adopted a red and white home kit inspired by the flag of Milan. But shortly after the war they were able to revert back to their classic colouring as the Fascist party were over thrown.

Another common attribute seen in the Inter Milan home shirts is a snake or reference to one. This is because a serpent has a great symbolic significance with the city of Milan. The most famous artwork of this serpent is in Milanese heraldry where it is a viper consuming a human. This graphic is also seen in the House of Sforza coat of arms, Duchy of Milan and the Insubria.

As far as away and third colour schemes go, they tend to differ slightly. The away apparel almost always is a direct reflection of the home kit featuring a white base colour with blue and black accents. However, the third kit often is used to experiment with a multitude of colour schemes and graphic designs. We will explore the most notable of these patterns further on in the article.

Manufacturers of the Inter Milan Kit

Back in 1998 Inter Milan made the switch from long term kit manufacturer – Umbro to Nike. After 11 years together, in 2013 they extended their contract for a further 10 years. This extension of producing the Inter Milan home, away, third and training ranges will take them across the 25 year benchmark. This will therefore make the partnership between Inter Milan and Nike historic as they will be the longest collaboration to date within the Serie A.

Along with their long term deal with Nike, Internazionale has also worked with a number of high profile and lesser known companies across the globe. Going back as far as the 70s, we have listed below these sports clothing brands along with how long they work with the Italian team:

Taking into consideration the fact that Nike is the longest standing contract Inter Milan has at the moment, they have also experienced a number of re-signed and extended partnerships with other brands too. Spanning 7 years, Umbro is the second longest partnership the team has had, and other than that they have spent small bursts of 3 to 4 years with Puma, Mecsport and Uhlsport. And finally, their shortest timespan was with Le Coq Sportif which only saw two seasons.

With their signature blue and black striped colour scheme locked in, there are very minute detailing changes which can really be done to the home apparel without altering this sought after appearance. However, over the years we have seen sportswear manufacturers experiment with subtle changes to the classic appearance and these have either been a hit or miss with fans. Below we have explored the most significant home shirts worn on the pitches during the Inter Milan home fixtures at Giuseppe Meazza also known as San Siro Stadium.

The home jersey produced by Nike for the 2008/09 season was greatly significant, mainly down to the fact that the team were able to wear the Scudetto with pride. This was as a result of a victorious season before where they won the Serie A. And during this 08/09 season they also went on to win a further trophy which allowed them to wear the Italian flag on their chest on the next home jersey the year after too. Styling wise, this jersey features the classic blue and black thick stripes, but it also has a gold printed Pirelli sponsor logo and trims on the sleeves and hemline. These subtle additions create a special feel to the jersey for fans.

For 2010/11 the Italian soccer team was able to wear the Scudetto on their chest for a fifth consecutive season. Nicknamed the ‘big grass snake’ Il Biscione, Nike incorporated this into the design of the home strip by updating the look of the stripes ever so slightly. Creating a scale affect to the edges of the stripes, this was an interesting take on the home look and had mixed opinions with supporters.

Possibly the most drastic change we have ever seen to the blue and black stripes are what were showcased on the 2014/15 shirt. This top features a primarily black base colour with very thin blue stripes and a horizontal blue line on the sleeves. As Nike had changed the appearance more than normal, this design change had fans talking. Complete with a smart polo collar, this jersey is a significant part of their kit history.

And finally, for the 2018/19 season, the Inter Milan home shirt features another nod to the club’s nick name. This time the snake textured effect is seen towards the bottom of the jersey. This pattern is mainly visible within the blue stripes compared to the black and fades in from the chest down to the hemline where it is more prominent. Finished with black sleeves, this is most certainly a modern edition to the home kit collection. 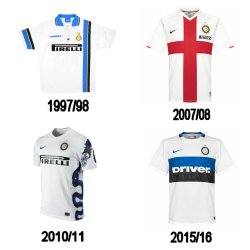 For fixtures away from their home grounds, Inter Milan has both an away and third kit. The away kit is most commonly used in away fixtures; however the third may be used on the odd occasion where the opposition’s kits look to close to their styling. Therefore as they have two whole other strips, it would be wrong not to mention notable away and third strips donned by the Nerazzurri. First of all we will take a look at the away kits for the club:

1997/98 was the last season which Umbro worked with the team before they started with Nike. And as a final design, they did not disappoint. The away jersey for the club featured the classic white base colour; however it also included blue, yellow and black stripes. These stripes are found vertically down one side of the shirt and are also present on the sleeves.

The 2007/08 centenary away shirt for Inter Milan was a very significant design. By sporting a white base with a red cross in the centre, this jersey pays homage to a kit worn by the Societa Sportiva Ambrosiana back in 1922. Marking 100 years of the Inter Milan soccer team, this is one of the most significant jerseys in history. A similar colour scheme was used for the 2014/15 away top which featured a white and grey striped base with white cross and red accents.

For 2010/11 the Inter Milan away jersey sported a unique design which contained such intricate detailing. Keeping the focus on the graphic detailing down the side of the torso and on the sleeve, the base colour is white and the accents are black and blue. The graphic design is inspired by a dragon combined with a look of a snake is an excellent addition to the jersey and makes it really unique.

Although the away top for 2015/16 kept with the classic white base with blue and black accents, this top had a striking design. Across the centre of the chest was a blue and black stripe with the sponsor logo printed in the middle. However, the background of this striped print featured a texture graphic representing a snakeskin. 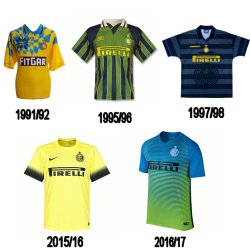 When it comes to the Inter Milan colour scheme, they usually tend to stick to the reverse of their home for the away, but when it is the third kit manufacturers are allowed to experiment more with colours. So let’s now take a look at the most notable third apparel for Inter Milan:

The third shirt worn in 1991/92 is one of the most notable as it features as bright yellow base colour with a blue squared design across the front of the chest. As the squares used are in different sizes and are rounded, this pattern almost feels like an optical illusion which didn’t receive a great response from fans.

For the 1995/96 third jersey Umbro chose a combination of a busy design and colour scheme. Green is the base colour for this top and there are yellow accents and blue stripes. The stripes are located on the bottom of the torso and the sleeves, whereas the chest is a plain green with thick blue panels on the shoulders.

For the 1997/98 third jersey, Umbro went for a graphic design approach to their final production of shirts. This time the top featured horizontal dark and lighter blue colours which created a cohesive base. And within the centre of the shirt was a subtle graphic of the Inter Milan crest keeping with the toned down colour scheme.

During the 2015/16 season we saw the return of the yellow base colour formerly used in the Umbro third jersey 91/92. However, this time the yellow third top featured black accents on the front of the chest and also an additional attribute on the sleeve. Black was used to fade into the yellow sleeves creating a unique look for the club’s third apparel.

And finally, the 2016/17 third shirt boasts a colour palette similar to that of the 1995/96 jersey. Featuring a green and blue gradient effect, this shirt has such a modern feel to it. Complete with a subtle striped design and plain blue sleeve, this jersey is a signature look for the Inter Milan squad.

What Are Your Thoughts on Their Kits?

Now we have taken a trip through history together exploring all of the weird and wonderful kits worn by the Internazionale players, we would like to know your thoughts on their clothing. Which was the most iconic strip worn by the squad in your opinion? Do you own any of the jerseys mentioned above? Get in touch with us over on our social media pages and we will love to chat all things soccer!

You can also take a look through our extensive range of Inter Milan football kits over at our online webstore – Soccer Box. There you can also pick up a collection of Serie A apparel and the Italian national team too. So don’t forget to have a browse through our store and order the latest or previous season’s shirts at a fantastic price!