How do you wash your football shirt? 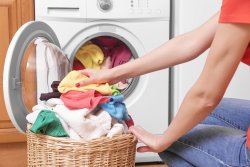 Football is an extremely popular sport, watched and supported by fans around the world. Â Team kits were introduced as early as the 1870s when it became apparent that players in each team needed to be distinguished from one another, the first official kit manufacturer was Bukta who were established in 1879. Â Since these early days of heavy cotton tops and long length shorts kits have evolved dramatically to their modern day form. Â Today's main manufacturers are Nike and Adidas, Nike make kits for teams such as Manchester United and Barcelona, Adidas are the suppliers for Real Madrid and Chelsea amongst many others. Â In the 1970s Admiral began aggressively targeting clubs in order to supply their kits, they made high quality versions for the teams and low quality nylon replicas were made available for the public to purchase. Â As technology has developed and kits have changed manufacturers now offer fans the opportunity to purchase high quality kits exactly the same as those worn by the players on the pitch. Â Recent research has shown that Manchester United and Real Madrid are the most popular replica shirts sold, each selling around 1.4m over the last five years.

Today much science and technology research has gone into the design and manufacture of all sportswear, and top brands have developed their own fabrics such as Nike Dri-fit or Adidas Cilmacool. Â These fabrics have been specifically designed to work with the body during exercise to wick away sweat and excess moisture by increasing ventilation and air circulation. Â Nike as an environmentally conscious company have gone a step further by developing the technology to make the fabric for their football kits from recycled plastic bottles, each kit is made from no more than thirteen plastic bottles. Â This fabric technology and the evolution of washing machines and tumble dryers has also changed the care and washing requirements of these kits. Â In the past the heavy cotton fabrics were washed at high temperatures to remove dirt stains, washing a modern day kit this way would be inadvisable. Â If you purchase a football shirt today it is likely to be 100% polyester, this cannot be washed at high temperatures, and requires more delicate treatment. Â Fortunately as fabric technology has evolved so has washing detergent that is now much more effective at lower temperatures than in the past, it is now widely recommended from an environmental standpoint that we wash all our clothes at no more than 30c. 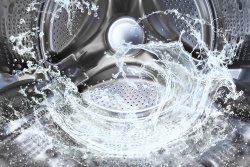 During the 80s the design of team kits got more complicated, the addition of manufacturer logos along with sponsors that are frequently printed added to the complexity of washing and drying these items, that are costly to purchase and therefore need to be looked after. Â In 1992 when the Premier League was introduced and major TV deals were signed it was decided that for the ease and accuracy of commentary each player had to have their football shirt printed with a name and number, this opened up the world of personalisation for supporters. Official lettering is applied using a heat press and leaves the finished product more vulnerable during the washing process, as heat from a hot wash or tumble dryer will cause the lettering to wrinkle and peel therefore, leaving the kit unattractive and effectively ruined.

At Soccerbox we would recommend that it is safe to wash your football kit if you turn it inside out first, this will protect the delicate printing and logos from the harsh spinning of the machine, you should use a mild detergent and a cool delicate setting to protect the engineered fabric, and importantly never use a tumble dryer.

Have you had any football kit washing disasters?

What special precautions do you take to protect your kit whilst washing?

Visit Soccerbox and order the football shirt of your favourite team ready for the new Premier League season, why not have it printed with your favourite players name and number as well.