How Influential has David Beckham been for Football Globally

Since the early 90s, David Beckham has become a household name in the soccer community and has taken Europe and the USA by storm. From his expertise on the pitch playing for a range of Premier League, LA Liga, Serie A and Ligue 1 squads, to shaping the football scene over in the States, he is possibly one of the most popular and well-known figures of the 21st Century.

Within this article we are going to take a look into the impressive career of Beckham on and off the pitch. So if you want to find out more about this significant soccer player, then keep on reading! 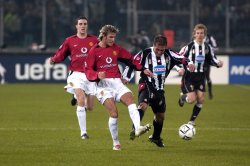 Ever since he was a young boy, David Beckham has always wanted to play professional football when he grew up. During an interview in 2007 Beckham said “At school, whenever the teachers asked, ‘What do you want to do when you’re older?’ I’d say ‘I want to be a footballer.’ And they’d say ‘No, what do you really want to do for a job?’ But that was the only thing I ever wanted to do.”

David Beckham grew up with very avid Manchester United supporting parents, so naturally he was a supporter of the Red Devils from an early age. They used to attend matches at Old Trafford regularly and Beckham also attended a football school in the city formed by Bobby Charlton. While he was attending the camp there he was given the opportunity to train with the Barcelona squad after winning a talent competition.

Throughout his junior career he played for Ridgeway Rovers which was a local team who were coached by his dad. The first major UK club Beckham played for was Tottenham Hotspur, along with this he also had stints at Leyton Orient, Norwich City and Brimsdown Rovers before signing up to the Youth Training Scheme at Man Utd in 1991.

When he was training at Manchester United, he was also playing alongside other household names in UK football history such as Ryan Giggs, Gary Neville, Phil Neville, Nicky Butt and Paul Scholes. After only playing together for a short period of time, the squad went on to with the FA Youth Cup in May 1992, with Beckham scoring the team’s second goal in the 30th minute against Crystal Palace. And shortly after this, Beckham signed with MUFC as a professional player in ‘93.

In 1994 Beckham was on loan to Preston North End where he scored two goals and this is where he was noticed for his impeccable ability to score directly from a corner kick. After Beckham returned from Preston, he was given the opportunity to join the squad’s first team, along with a number of other youth players. This was a brave choice by Sir Alex Ferguson as he received a lot of critique from other clubs and supporters for opting to promote younger players up, rather than to sign experienced players from other teams.

However, this decision soon changed people’s minds when the team were able to secure the Premier League and FA Cup title with the addition of Beckham and other younger players. And after his successful performance in the first team, Beckham was given the number 10 jersey for MUFC, the most sought after number in soccer. And wearing this new shirt, Beckham established himself further through his outstanding shot against Wimbledon which saw him kick the ball from the half way line and straight into the back of the net.

The season after this he helped Man Utd win a treble, which meant that the team achieved champions status in the Premier League, FA Cup and the Champions League. This is where other clubs started to gain interest in David and his impressive skill on the pitch. And by the start of the early 2000s, his relationship with Ferguson started to get rocky which meant that a move was definitely in question. However, after having his contract extended for one season, he suffered an injury in 2002/03 which meant he was unable to 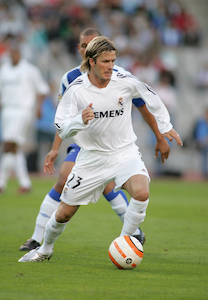 re-join MUFC as his position was replaced with another player ahead of the fixtures.

In 2003 we saw Beckham make the move away from Premier League football and joining a La Liga club called Real Madrid after the soccer community speculated a transfer to Barcelona. In his first season with Real Madrid, were runners up in the Copa del Rey which meant they did not make it into the UEFA Champions League. Throughout his time with Real Madrid, he and the team struggled greatly with achieving a high rank in the leagues, and with the constant swapping of coaches, this was taking effect on the squad’s performance.

During the 2005/06 season with Real Madrid, Beckham set up soccer academies over in LA and London. And after another unsuccessful La Liga season David departed from the squad and signed a five year deal with LA Galaxy over in the USA. Although there was a considerable transition period between these two contracts which saw Beckham continue to train at the Real Madrid grounds until he officially started with the MLS club. Reportedly Beckham was purchased by LA Galaxy for $32.5m.

His initial début with LA Galaxy started with him appearing for part of matches as a substitute. And he also suffered from a range of injuries during his first two seasons with the club which meant that his participation on the pitch was even more restricted. In 2009 he was loaned to AC Milan and he also was called upon to join the Serie A team in 2010 too. This made fans curious whether this meant that Beckham was returning to European football, but after his time on loan to AC Milan he returned to LA Galaxy to finish his five year contract. And lastly, he joined PSG in 2013 for one single season before he retired.

Below is a breakdown of his professional soccer career and how many goals he acquired for all the football clubs he played for over the years. We have also included his performance with the England national team too:

As David Beckham has had the pleasure of playing with football teams all over the world, there is no doubt that he has been presented a number of awards as both part of a squad and based on his individual performance.

In this section of the article we are going to look into the honours given to Beckham across his career. These are broken down into club and personal awards: 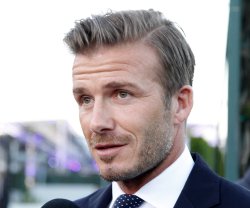 In 2013 David Beckham announced his retirement from professional football and was presented with a pair of custom boots with a Union Jack design and his wife and children’s names stitched onto. These were the boots he wore for his last match with PSG before leaving life as a Midfielder behind.

Only a few months later in 2014 he had plans to buy an MLS expansion team for $25m. This was written into a contract which he signed with LA Galaxy back in 2007 and in 2014 he decided to act upon it. This is where he created Inter Miami CF and they were expected to make their first appearance on the pitch in 2016/17. However, due to the fact their stadium build was incomplete; they had to postpone their début until 2020.  The only details released about the team so far is the crest and the name with a black and pink colour scheme.

Along with this in 2019 Beckham is expected to collaborate with his ‘Class of 92’ team-mates as co-owners of a non-league English football club called Salford City. Beckham therefore was to take over the 10% share of the club, previously held by Peter Lim. However, this choice of Beckham’s had to be approved by the Football Association before the contract was final. And this was eventually passed at the end of January ‘19.

Since his retirement Beckham has also taken part in a lot of charity work with UNICEF along with a range of acting cameos and advertisements. He also created his own fragrance line along with many other brand endorsements.

Prior to his retirement, he also set up the David Beckham Academy in 2005 which was a football school for young aspiring players, similar to that of Bobby Charlton's which he had attended as a child. These were based in LA and London; however these both closed their doors in 2009. Although there is a more mobile academy in the pipeline which will benefit Beckham’s travelling schedule much more.

What are Your Thoughts on Beckham?

In this blog post we have expressed the significant impact David Beckham has had on the soccer community worldwide. From children and players idolizing his technique on the pitch, to the honours and achievements awarded to him as a figurehead for the sport. And let’s not forget the fact he set up an academy for younger players, and created his own team in the States.

However, we want to know your opinion on the long standing career of Beckham. Do you feel that his career has been more effective on or off the pitch? Or does his experience on the field influence his approach to his occupation in the managerial roles? Find us over on our social media pages where you can chat to us about all things football!

We also stock a wide range of football shirts for teams worldwide, so why not grab a Manchester United, Real Madrid, LA Galaxy, Milan, PSG or England soccer jersey today and don the crest Beckham himself once did.