Inter Milan Away Kit Gets a Revamp

Inter Milan hasn't won an Italian Serie A since the 2009 2010 season, instead watching as Juventus has built a three-year reigning dynasty as the champions of the division. But when Inter fell out of the top three last season, for the second time in just 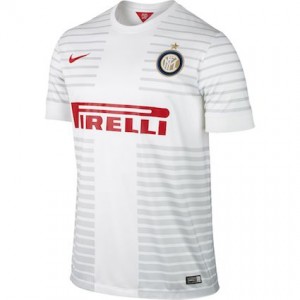 three years, it was clear that a few changes were needed to keep the club from getting stale. One of those changes is on display with the new Inter Milan away kit, which has shifted colors from white and red to white and blue to announce the dawn of a new era for the club.

Indeed, the redesign of the Inter Milan away jersey 2014 2015, while slight, is still notable. Most aspects of the shirt have remained the same: Nike is still the kit manufacturer, the team's crest is still embroidered proudly on the shirt's left-hand breast, and Pirelli is still Internazionale's main sponsor. However, where last year's away shirt was white with blue trim, the trim colors have changed to red this time for an intriguing new design. You can check it out for yourself on Soccer Box!

This isn't the first time that the Inter Milan away kit has gotten a redesign. Pirelli has been the shirt sponsor for the Inter Milan football club since 1995, and Nike has been making the club's kits since 1998, but in that time, the away jerseys have shifted around a bit.

In fact, just last year, the Inter Milan away jersey was redesigned, switching to the traditional white and blue jersey look from a bolder-looking red jersey with blue trim. In fact, comparing the Inter Milan away jersey 2014 2015 to the away kit from the 2012 2013 season is more like contrasting home and away kits than it is like looking at two different versions of the same jersey.

Why Internazionale has taken to making frequent changes to its kits, especially when some teams tend to maintain near-identical jerseys from one year to the new, is unknown. However, it could have something to do with the team trying to bring some extra luck its way after several seasons of underperforming football squads.

Indeed, the recent past hasn't been the brightest part of Inter Milan's legacy. The 2010 2011 Serie A victory was followed up by a near-disastrous season when Inter Milan fell to sixth place on the league table. The next year, Internazionale fell even further, to the ninth position, and while last year's fifth-place finish was a narrow improvement, it did little to instill new confidence in Inter Milan fans.

Before Internazionale fell into its recent performance rut, though, the team was the best in all of Serie A. Five consecutive league victories from 2005 to 2010. During those golden years, Inter repeatedly won other honors as well, whether they were Italian trophies (the Coppa Italia and the Supercoppa Italia) or European titles (the FIFA Club World Cup and the UEFA Champions League).

Unfortunately for Inter Milan fans, the club seemed to lose its magic touch in 2010 or 2011. The team's most recent trophy was the Supercoppa Italia in 2011, which took place in May of that year. In other words, it's been over three years now since Internazionale's golden age seemingly came to a close.

So what are the prospects for Inter Milan's upcoming season? What are the chances that the Inter Milan away jersey 2014 2015 could become a symbol of the team's long-awaited return to greatness?

The good news is that team manager Walter Mazzari, who joined the club in May 2013, will evidently be getting a second season. He will be the first manager to stay with Inter Milan since Jose Mourinho, who led the team from 2008 to 2010.

While Mazzari's squad didn't have a great season last year, it's entirely possible that one of Internazionale's biggest issues over the past four years has been the complete lack of managerial consistency.

Do you think Mazzari can bring some momentum back to Inter Milan? If so, stop by the Soccer Box online store today and grab a new Inter Milan away kit to celebrate the start of yet another Serie A season.