With the UEFA European Championship Qualifiers completed, next on the menu for the 2020 Euros is the group stages. And in anticipation of this section of the tournament being just around the corner, we thought we would start by looking into how the groups have performed and make some predictions for the upcoming fixtures. In this blog post we are going to explore Group A which contains the following national teams:

Throughout the post we are going to look into each national team in Group A in depth so that we can get a better picture on how the group stages will pan out. So, if you want to find out more about what could be expected from Group A, then keep on reading.

The Italian national team is currently ranked 13th in the FIFA World Rankings with 1607 points. Italy are a relatively strong team so we could expect them to do really well in the Euros. However, going by their unsuccessful attempt to qualify for the 2018 FIFA World Cup, could this of been the motivation for them to pull their socks up and be on top of their game during the Euros, or could this be the start of their downward spiral?

To begin with we are going to see how the Italian national squad fared during the Euro 2020 Qualifiers. Below is a breakdown of the matches in which they played during the qualifying round of the Euros to earn themselves a place in the group stage:

Looking at the breakdown above we can see that Italy has successfully won all of their 10 matches during the qualifiers. Their most outstanding result was during their first match against Armenia where they netted 9 goals in total. Could their success during the qualifiers be the vengeance Italian supporters were after for the squad after failing to qualify for the World Cup?

Next, we are going to acknowledge the top players who have donned the Italy kit during this year’s tournament. Below are the results of the key players’ goals in the Euro 2020 Qualifiers:

As we can see above, the Italy national team has a number of strong players who have successfully netted 3 goals each. These key players helped contribute to their total of 37 goals scored in the Euro 2020 Qualifiers along with other players. Could this be a sign of what is to come in terms of strong and consistent teamwork?

And lastly, we are going to acknowledge Italy’s previous performance in national tournaments. Here we have listed the dates of the national games in which they have lifted the trophy:

The Switzerland national team is currently ranked 12th in the FIFA World Rankings with 1608 points. Knocked out in the round of 16 during the last national tournament, within this part of the article we are going to look into how the Swiss national team has performed in the qualifiers to gauge how they will progress in the tournament. Below is a list of the matches they played during the Euro 2020 Qualifiers:

In the breakdown above we can see that their strongest game was against Gibraltar whereby they netted 6 goals in the first game and 4 in the second. Overall during the Euro 2020 Qualifiers Switzerland won 5 of their 8 games, only losing once and drawing twice. During these eight matches the Swiss national team netted 19 goals in total.

Next, we are going to acknowledge the standout players from the Euro 2020 Qualifiers who did their nation proud while wearing the Switzerland kit and landed them a spot in the group stages. Here is a brief look at the high scorers from the qualifiers:

Above we have looked into the Switzerland national team’s current performance in the Euro 2020 tournament, but now we are going to explore their overall national performance. Below is a brief overview on how the national side has fared in the World Cup and Euro tournaments:

The Turkish national team is currently ranked 29th in the FIFA World Rankings with 1494 points in total. After they failed to qualify for the 2018 FIFA World Cup, it was surprising to fans and supporters when they made it through to the group stages after the Euro 2020 Qualifiers. Below we have listed the games that Turkey played in the qualifiers and we are going to see how they fared:

Above we can see that Turkey has faced France, Iceland, Andorra and Moldova bravely during the qualifiers. Their highest score was 4 goals which they netted in both matches against Moldova and they also managed to net 3 goals in total against previous World Cup Champions – France. In total Turkey had scored 18 goals out of the 10 matches they played in the qualifiers, winning 7, drawing twice and only losing once which was to Iceland.

Helping to rack up their goals to 18 in total were some of the national team’s key players who don the Turkey kit with pride. Here are just a few of the notable players from the Euro 2020 Qualifiers along with their number of goals scored in that part of the tournament:

As we have looked into their current national performance, we are now going to investigate their overall stats and appearances from the World Cup and Euro games:

After not qualifying for the 2018 World Cup and coming 17th in the 2016 Euros, could this the turn around the Turkish national team needs. In the Euro 2016 qualifiers they netted 4 less goals than they have this time round.

The Welsh national team is currently ranked 23rd in the FIFA World Rankings with 1540 points. Unfortunately, Wales did not qualify for the past national tournament, which was the FIFA World Cup in 2018, but they did make an appearance in the 2016 Euros where they made it to the semi-finals. Due to this, the turnout of Wales’ performance in this season’s games could go either way. Below we have broken down the matches they played in the Euro 2020 Qualifiers along with the scores to see if we can identify any trends:

In the matches above we can see that their most successful matches came against Azerbaijan and Hungary where they netted 2 goals in each match. In total the Welsh national team acquired 10 goals overall during the qualifiers. Out of the eight matches they took part in, they won 4 of them, drew twice and lost twice. Compared to their performance in the Euro 2016 qualifiers where they netted 11 goals, there is a small drop in their results since their last national tournament.

Contributing to these 10 goals and wearing their Wales football shirt with pride, here are a few of the top scorers from the Euro 2020 Qualifiers:

And last but not least we are going to see how the Welsh national team has performed on a whole during national tournaments. Here is a brief breakdown on how they have fared in the World Cups and Euros: 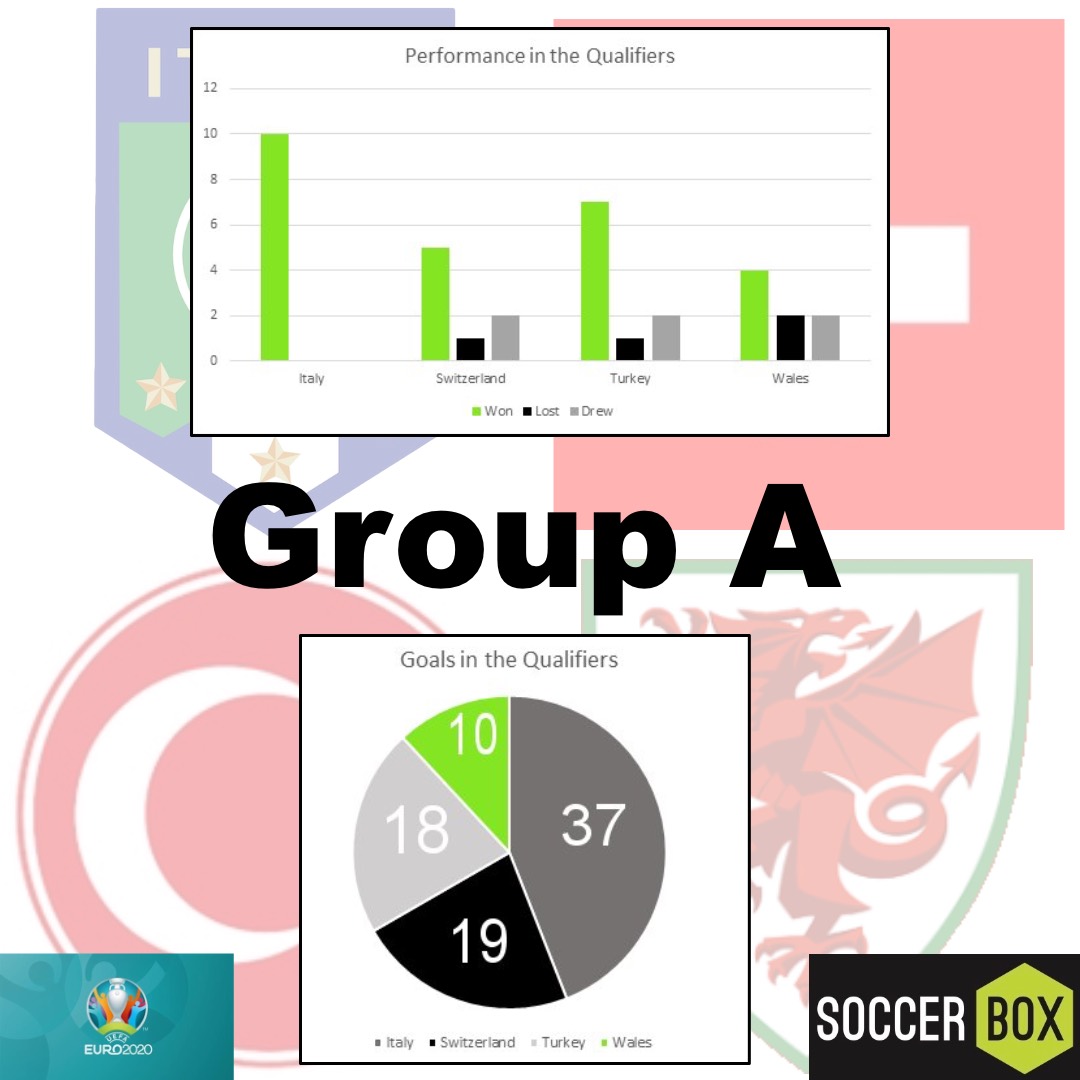 To begin with we are going to look at their stats from the Euro 2020 Qualifiers:

As we can see above the strongest team in terms of wins and goals is Italy with the Swiss and Turkish teams very closely behind them. But depending on how they perform in the group stages this could all change.

And lastly, we are going to see how they are ranked in the FIFA World Rankings:

Despite Italy being the strongest with wins and goals, they are 1 point being Switzerland in the FIFA World Rankings. It could most certainly be a close one between these two.

What Are Your Thoughts About This Group?

Throughout this article we have looked into the performance of all national teams in group A of the Euro 2020 tournament. Seeing how they have coped previously in national games and how they performed during the qualifiers allows us to have a better understanding on how the group stages will go. Who do you think will be the strongest team in this group? Let us know your thoughts over on our social media pages today! And don’t forget that you can shop our vast range of Euro 2020 kits over on our online store – Soccer Box and pledge allegiance to your nation today!