Ivory Coast Qualifies for Africa Cup of Nations, But Ends 2014 with a Friendly Loss

In a way, the Ivory Coast national football team ended 2014 with both a bang and a whimper. On one hand, the squad clinched a slot in the 2015 Africa Cup of Nations back in November, finishing in second place in qualifying Group D. On the other hand, they ended the qualifiers with a limp scoreless 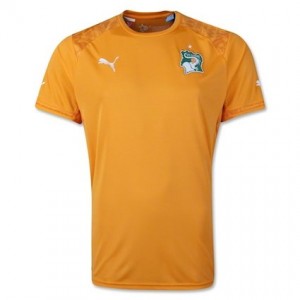 draw, and lost their last football fixture of the year-a friendly match against South Africa-in a 0-2 away game. Fans in the Ivory Coast football shirt are hopeful that their national side will look a bit stronger in January 2015, when competition official begins for the biggest soccer competition in Africa.

Prepare for the big event today by stopping by Soccer Box today and picking up a brand new Ivory Coast home jersey 2014 2015. A plain orange Puma jersey, the Cote d'Ivoire home shirt is nonetheless striking for its well-made design and for the country's famous elephant crest. Soccer Box also has stock available of the green Ivory Coast away jersey-which boasts the same basic jersey design in a different color.

Players and fans alike have been wearing both versions of the Ivory Coast football shirt throughout 2014, and will continue to wear them in 2015 for the Africa Cup of Nations. 2014 has been a big year for the Cote d'Ivoire national football side, and from the looks of it 2015 will be as well. Make sure you have a team jersey to remember these exciting days!

2014 was a pretty exciting year to be a fan of the Ivory Coast national football team. Not only did the Elephants qualify for the 2015 AFCON, but they also got to play at the FIFA World Cup for the third time in a row.

In terms of placement, 2014 was actually Cote d'Ivoire's weakest performance yet at the World Cup. The team has exited the competition after the group stage each year, but this year, they were ranked in 21st place of the 32 countries in contention. (In 2010, they finished in 17th, while 2006 saw them end the event in 19th place.)

Still, fans in the Ivory Coast home jersey 2014 2015 were treated to some exciting football action at FIFA's biggest event. The Elephants beat Japan 2-1 in their first match of the tournament, and put up decent fights against both Colombia and Greece.

Both Gervinho and Wilfried Bony did the Ivory Coast football shirt proud at the tournament. Of the four points that the Elephants scored in Brazil, each striker delivered two of them.

Cote d'Ivoire's most substantial accomplishment in 2014, though, was laying the groundwork for what should be a successful 2015 African tournament for the squad. Drawn into qualifying Group D-alongside Cameroon, Congo, and Sierra Leone-the Elephants looked like frontrunners for qualification.

After all, Ivory Coast was the runner-up at AFCON 2012, and made it to the quarterfinals. Congo missed qualification to the former, and was eliminated after round one at the latter; Sierra Leone hasn't qualified since 1996; and Cameroon, while a four-time tournament champion, missed out on qualification in both 2012 2013.

Cote d'Ivoire made good on its frontrunner status from the start. Players donned the Ivory Coast home jersey 2014 2015 for a September 9th match against Sierra Leone, and won a 2-1 victory as a result.

Things went awry in the second game, though, an away fixture at Cameroon. Cameroon won that game 4-1, leaving the Elephants looking weaker than most had expected. The Ivory Coast bounced back to score big away wins against the Congo and Sierra Leone.

A loss against the Congo at home, in a close 3-4 match, and a scoreless home draw against Cameroon, ended the country's qualification run in lukewarm fashion. Luckily, though, the Ivory Coast had already delivered a good enough win-draw-loss record to take second place in the group and reach the tournament.

Will the Ivory Coast contend at next year's African soccer championship? Root for them with a new Ivory Coast football shirt, available at Soccer Box in both home and away designs!Â