After the first games of the 2015 Africa Cup of Nations, fans of the Ivory Coast national football team were left scratching their heads. After an appearance in the 2014 World Cup in Brazil, plus a 2012 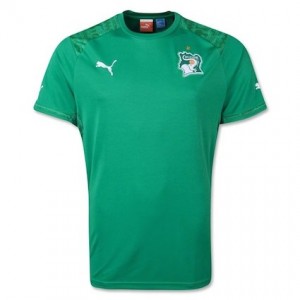 runner-up finish in the Cup of Nations, the Elephants were expected to be a top contender at this year's incarnation of the African soccer competition. And yet, Cote d'Ivoire's first two group stage matches ended as lukewarm draws. It was enough to leave supporters in the Ivory Coast jersey reconsidering their soccer squad's shot at a title.

Luckily, though, those first two draws were part of the exception rather than the rule. The Ivory Coast national side sailed through the rest of the 2015 Cup of Nations tournament, ultimately clinching their second trophy at the event. (The Elephants first won in 1992.) Celebrate their victory today, with a new set of club jersey designs at Soccer Box. From the gorgeous green Ivory Coast away shirt 2014 2015, to the orange home shirt, these Puma jersey designs are stunning, and are the perfect way to celebrate the Ivory Coast's recent football successes!

The 2015 Africa Cup of Nations

The Ivory Coast national football team began its campaign for a second African continental championship back on January 20th, drawing into Group D along with Guinea, Mali, and Cameroon. As mentioned previously, the first two fixtures in the groups round ended as draws for the wearers of the Ivory Coast jersey-first with a 1-1 tie with Mali, and next with an identical outcome against Mali.

Luckily for Cote d'Ivoire, the other two fixtures in Group D-Mali vs. Cameroon and Cameroon vs. Guinea-also ended as 1-1 draws. As a result, no football squad had the edge on the others headed into the final leg of fixtures. They were all tied at zero wins, two draws, and zero losses, with identical goal difference ratings of +2.

That meant that the Elephants needed a win as they donned the Ivory Coast away shirt 2014 2015 and prepared to face off against Cameroon in the final group stage match. And with a 36-minute goal from Max-Alain Gradel, a 1-0 win is precisely what the team managed. Onto the knockout stage!

The 2014 2015 Cote d'Ivoire lineup looked considerably stronger and more comfortable in the knockout rounds of the tournament. In the quarterfinals, they sped past Algeria, with a brace of goals from striker Wilfried Bony leading to a 3-1 victory.

Bony did the 2014 2015 Ivory Coast jersey proud once more during the semifinals, providing two strong assists (one for Yaya Toure and one for Gervinho) to help bring about yet another 3-1 win. That football match, an "away" fixture, was played against Congo DR.

So it was that Cote d'Ivoire ended up in the championship match, facing off against Ghana. As four-time champs at the Africa Cup of Nations, the Ghana squad looked like a tough opponent heading into the final match, and they didn't disappoint.

Indeed, a hard-fought match between the Elephants and the Black Stars ended with the score locked at 0-0 at full-time. The same stalemate existed after extra time, as the game barreled into a true nail-biter of a penalty kick shootout.

It looked as if the Ivory Coast's great tournament run was at an end at the start of the shootout, as both Bony and forward Tallo Gadji missed their shots. Ghana's first two kicks were right on target, which left the Elephants trailing 0-2. Luckily, the Black Stars missed their next two, while Cote d'Ivoire got back on track. 2-2.

From there, the shootout dragged on for quite some time, without either team missing the mark. 3-3. 5-5. 7-7. When taking aim for a ninth penalty kick, though, Ghana finally made an error. Razak Brimah missed his goal, which gave the Ivory Coast the opening they'd been looking for. And just like that, with a beautiful kick from goalkeeper Boubacar Barry, Cote d'Ivoire had achieved a second Africa Cup of Nations.

Needless to say, fans in the Ivory Coast away shirt 2014 2015 or home jersey went wild. It had been an adrenaline-fueled game after an emotional rollercoaster of a tournament, and it had at last reached a happy ending.

Celebrate that happy ending today, with a brand new 2014 2015 Ivory Coast jersey. Soccer Box has stock available of both the green away shirt and the orange home shirt, both designed by Puma!