Brazil Football Team Wraps 2014 with a String of Winning Friendlies

It's been a whirlwind year for the Brazilian national football side. From hosting the 2014 World Cup to contending for the title, the country's squad has certainly gotten a workout over the past 11 months. They recently wrapped up 2014 play with a streak of six friendly fixture wins, a multitude of victories that will at least somewhat atone for the team's failure to win FIFA's biggest 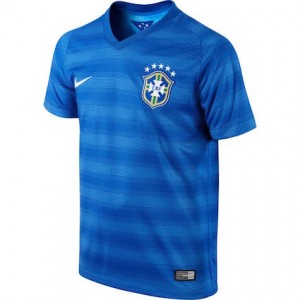 event at home. With the holidays around the corner, it might be the perfect time to pick up a new junior Brazil football kit for the young football fanatics in your family!

Soccer Box has an array of different kit items for the Green and Yellow. If you are shopping for the junior fan in your life, check out the Brazil kids away shirt 2014 2015. The Brasil squad wore this radiant, sapphire blue Nike shirt this year, and will continue to wear it throughout 2015. Your kids will love the miniaturized, junior version. We also have kids and adult versions of the yellow and green home kit, if your kids prefer Brazil's home shirt to their away kit!

At this summer's grandiose FIFA tournament, Brazil ended up coming in fourth place. To just about any other country, such a high placement would be an honor in any global soccer event. To Brazil though, a soccer team that has won the World Cup five times, the semifinal exit was a disappointing end to what had been a very promising competitive year.

Granted, 2014 saw the country's highest placement in the World Cup since their last victory, in 2002. However, leading up to the tournament this summer, all factors seemed to be aligning for a victory. Not only would Brazil be playing in front of a home audience, but they also had Neymar, a celebrity striker that all of the kids in the junior Brazil football kit adore.

Despite all of the fans in the Brazil kids away shirt 2014 2015, chances seemed to dissipate for the Green and Yellow after the very first match of the competition. The Brazilians were sloppy in that fixture, a 3-1 win against Croatia that included an own goal from Brasil's Marcelo.

The soccer squad ultimately won their group stage draw, but they only beat Chile on penalty kicks in a close round of 16 match. When Neymar injured his spine in the quarterfinal match against Colombia, it seemed clear that the Green and Yellow's chances of nabbing another World Cup title were gone for 2014. They beat Colombia 2-1, but were crushed by Germany in a 7-1 semifinal match, and even lost the third-place consolation game against the Netherlands.

Making up for Lost GamesÂ

Unsurprisingly, the Brazilian football squad had something to prove after the disappointing performances at FIFA's biggest soccer showcase. As a result, the national side brought their A game to the six friendly fixtures they played this fall-and ended up winning all six.

If your kids were dressing up in the junior Brazil football kit this fall, there was a good reason for it. In early September, Neymar returned to the national squad. Poetically, his first game back was against Colombia, the team that had injured him during the summer, and he got his revenge by scoring the only goal of the fixture.

The next month saw two more home triumphs-against Ecuador and Argentina-before fans had occasion to wear the Brazil kids away shirt 2014 2015. The first away friendly of the fall was against Japan, and it proved to be the Brazilian side's greatest showcase in months. The away team won 4-0, with Neymar delivering all four goals.

Another 4-0 triumph came just weeks later at an away fixture against Turkey, while Brasil ended their year with a 2-1 win over Austria-also an away game.

What's next for Brazil? It's hard to say: the national side doesn't currently have any football matches on the schedule for 2015-friendly or otherwise. In any case, though, it looks like Brasil is back in top form, and you can celebrate that fact by stopping by Soccer Box today to pick up a 2014 2015 junior Brazil football kit. We have kids gear and adult gear, home kit items and away shirt variations.