Juventus Reach Champions League Semifinals for the First Time Since 2003

Wednesday, April 22nd brought a glorious moment for Italian football fans, when, for the first time since the 2002 2003 season, Juventus FC earned a slot in the UEFA Champions League semifinals. The 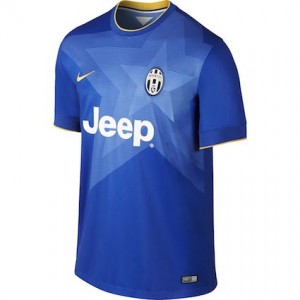 Zebras did it by topping Monaco 1-0 in the quarterfinal aggregate, and will now move one step further toward winning their first UCL title since the 90s. Root for the Italian football squad today, with a new Juventus Nike kit from Soccer Box.

In order to mark the Zebras' milestone moment in the 2014 2015 Champions League, we at Soccer Box are celebrating by offering discounts on several products in our Juventus store. From the black-and-white striped home kit that gives the team their nickname, to the radiant blue Juventus away jersey 2014 2015, all the way to the lime green third jersey or the bright orange training kit, you choose your favorite Nike Juventus soccer jersey designs.

Don't miss out! Stop by the Soccer Box website to pick up a new 2014 2015 Juventus Nike kit, and get ready to support these Italian heavyweights in this year's UCL semifinal.

After crushing Borussia Dortmund with a 5-1 aggregate in the round of 16, Juventus came blasting into the quarterfinals with momentum on their side. They found a surprising challenge with AS Monaco, though. Indeed, when the two squads first faced off-on April 14th, for a home leg at Juventus Stadium-Monaco managed to hold the Zebras to just one goal.

Indeed, the home side's only point came from a penalty goal scored by Arturo Vidal in the middle of the second half. It was enough for a 1-0 victory, but it still had fans wondering about how Juventus would fair in the April 22nd away leg. After all, if the club could only manage a single penalty goal with the home field advantage on their side, how would they do with the tables turned?

Fans in the Juventus away jersey 2014 2015 had good reason to be uneasy about their squad's chances. The Champions League has not been kind to the Zebras in recent years. Last year, the football team was eliminated from the tournament after a poor performance in the group stage; the year before, they'd bowed out after a pair of quarterfinal losses against eventual tournament victors Bayern Munich; and in 2011 2012, they hadn't even qualified for the UCL.

In fact, ever since their 2002 2003 runner-up finish, Juventus have struggled at the Champions League. That year, they beat defending champions Real Madrid in the semifinals to earn a spot in the final match. There, they lost in penalty kicks to Milan. Even with the defeat, though, the tournament was still a good one.

Since then, though, the wearers of the Juventus Nike kit have been fruitlessly searching for another UCL triumph. In 2004, they were eliminated in the round of 16, and in 2005, they fell out after the quarterfinals. Years of scandal followed for the football club, and the UCL disappointments continued and grew.

For that reason, fans were both excited and uneasy as the Zebras donned the Juventus away jersey 2014 2015 for the April 22nd away leg with Monaco. Would their team finally break the decade-long Champions League curse? Or would Juventus again miss out on a semifinal slot?

The away game was anything but decisive, with the score stuck at 0-0 until full time. However, combined with the 1-0 home leg victory, the scoreless draw was enough to give Juventus a one-point win in the aggregate. And as a result, the Zebras are on their way to the UCL semifinals for the first time since 2003!

Celebrate the good news-and get ready for the semis-with a new Juventus Nike kit from Soccer Box! Remember, every piece of Juventus Nike gear in our store is currently selling for 35% off, so if you have been waiting for a great deal on a 2014 2015 home jersey or away kit, then now is the perfect time to buy!