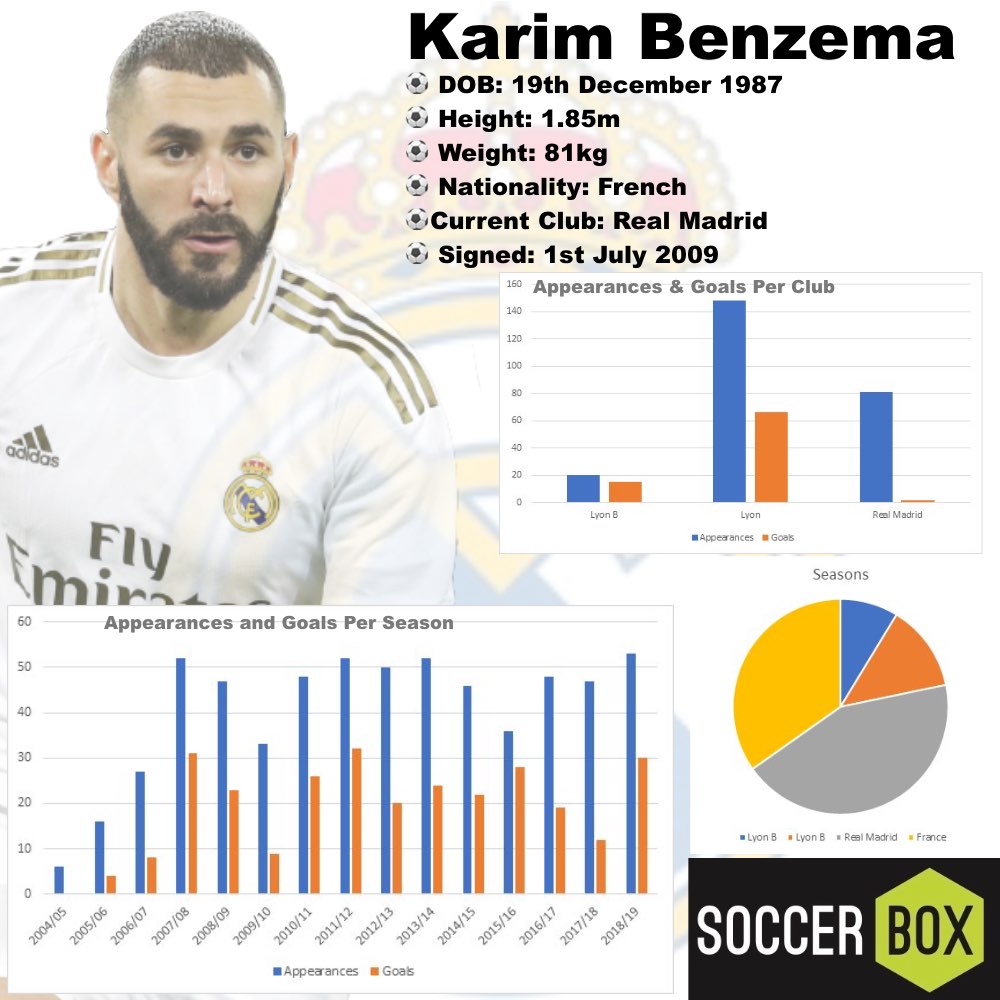 Today we are going to look across the football career of Karim Benzema. Covering his youth to senior soccer years both with clubs and internationally, we will compare his performance and progress throughout the years. Here are the basics of Benzema’s player and personal profile, to find out more, keep on reading:

Born on the 19th December 1987, Karim Mostafa Benzema started his football career in 1995 at only seven years old with the under 10 squad for Bron Terraillon SC which was the local club of his hometown. Not too long into his time with SC Bron, the squad played a match against Lyon youth academy and Karim scored two goals within the game.

This performance therefore attracted the attention from Lyon which was the biggest club in the city. After this Lyon officials approached Benzema with regards to signing him so that he could join their youth academy. However, the president of SC Bron had refused them access to Benzema. But after a discussion with his father, Benzema was allowed a trial with Lyon.

During this trial Benzema was recruited by Lyon and signed over into their youth academy. Throughout his time with Lyon, Karim climbed the youth categories rapidly which impressed the coaches and staff. This earnt him the respect within the academy which in turn presented the opportunity of him being a ballboy during the Lyon senior team matches.

When he was at the under 16 level in the academy, he scored a total of 38 goals in the Championnat National des 16 ans which earned him the promotion to the club’s reserve team for the Championnat de France amateur. He was only with the reserve team for the autumn campaign, but managed to net 10 goals, helping the club to finish second in the group.

In 2004 Benzema joined the senior team during the half season break. As a custom in Lyon, new players arriving on the squad had to stand up and speak to the team. Benzema was faced with this task where he had to address the likes of Essien, Wiltord, Malouda and Abidal. During this speech he was subjected to jokes and laughter, and in return he said, “Don’t laugh, I’m here to take your place.” Which had the players stunned yet skeptical.

Benzema’s first professional debut was against Metz in 2005 as he went on as a substitute, while on the pitch Karim scored one of the two goals for the club which contributed to their 2-0 win. As a result of this performance, he was awarded his first professional contract which signed him with Lyon for three years.

His second season debut, now part of the official Lyon team, came on the 2nd October 2005 after he was sent on as a substitute. He also appeared in the UEFA Champions League in the December where he competed in the match against Rosenborg. Soon after scoring his first professional goal to contribute to Lyon’s 2-1 win against Rosenborg, he scored his first professional double in a 4-0 win in the Coupe de France against Grenoble.

During the 2006/07 season, Benzema started to earn more playing time and his first match was against Paris Saint Germain. He also opened the league by scoring in the team’s first game against Nantes. Only three weeks after this, he was sent on as a substitute during a match against Nice in which he scored two out of the 4 goals acquired to secure Lyon’s 4-1 win. Karim ended the 2006/07 season with an injury which saw him out of action for three months.

At the beginning of the 2007/08 season, Benzema was awarded the number 10 Lyon shirt. This was down to a combination of his expertise on the pitch and the fact that Malouda, Carew and Wiltord all left the club prior to the start of the season. This season he appeared in 51 games for Lyon and scored 31 goals in total. Breaking this down, there were 20 goals in the league, 4 in the Champions League, 1 in the Coupe de la Ligue and 6 in the Coupe de France.

During this season he had many impressive goals such as a hat-trick against Metz, an equalizing goal from a free kick in the 90th minute against Saint-Etienne and a goal that was nominated for goal of the season by fans which was in a match against Lens.

In the Champions League 2007/08 Benzema gave an incredible performance which saw him score a double in a match against the Rangers which secured Lyon a place in the knockout. Their knockout match was against Manchester United that ended up as a 1-1 draw after Benzema scored the only goal for Lyon from outside the penalty box. This performance got him praise from the Manchester United manager and squad.

The club president of Lyon took this praise as a sign of other club’s gaining interest in Karim in terms of recruiting them. Therefore, on the 13th March 2008, Benzema’s contract was extended with Lyon until 2013 and contained a one-year extension clause. After signing, this made Karim one of the highest paid footballers in the country. And concluding the 2007/2008 season, he was named Ligue 1 Player of the Year, Trophee du Meilleur Buteur and shortlisted for the 2008 Ballon d’Or.

Benzema started the 2008/09 off on a strong foot by scoring twice in the opening match along with goals in the matches against Grenoble, Saint Etienne and Nice which lead them to multiple victories. With Benzema being on top form, there were a lot of transfer rumours going around which were soon dispelled by Lyon after they placed a 100M Euro price tag for the player in order to discourage other teams from wanting to purchase him.

After a rough spot during the season, Lyon made an agreement with Real Madrid on the 1st July 2009 so that Benzema could be transferred. Real Madrid paid 35M Euros in the beginning for him, with the total fee rising to 41M Euros after the inclusion of incentives. Only eight days after this agreement between squads, Karim Benzema joined Real Madrid after passing his medical. The contract he signed with Real Madrid was for six years.

His first appearance for Real Madrid was during a pre-season friendly against Shamrock Rovers when he was sent on as a substitute at half time. During his time on the pitch he scored the only goal for Real Madrid during the 87th minute, thus securing their 1-0 win. He also went on to score two out of the four goals against Rosenborg as part of the Santiago Bernabéu Trophy.

2010 saw Benzema given the number 9 Real Madrid jersey but was often over-looked by Jose Mourinho for the starting line-up as he preferred to use Ronaldo and Higuain as the forwards. This meant that Benzema was on the bench and used as a substitute for another season. But come late November in 2010, Benzema was added to the starting line-up after Higuain suffered a severe back injury. His first time on the pitch did not see him disappoint as he scored in his first match against Ajax in the Champions League. He then continued on a high throughout the season, and ended up second on the team, behind Ronaldo in terms of goals.

At the beginning of the 2011/12 season Benzema attended a high-performance clinic to help reduce his weight and build muscle mass. When emerging from the clinic stronger and 8kg lighter, he got straight to work and had an impressive pre-season performance by scoring eight goals during seven matches. As a result of this, Mourinho named him the starting lead striker for the new campaign.

In his new shape, Benzema went on to have a further successful stint with Real Madrid, securing a large number of goals for the squad. As a result of this, he had his contract extended for five years in 2014. And since then he has continued to stun fans and teammates with his impressive goal scores.

From an early age Benzema has been representing his home country in international soccer fixtures. He started with the France U17 squad in 2004 and moved up the teams until making the senior team in 2007. Benzema capped for the senior team during the Euro 2008, 2010 World Cup, Euro 2012 and the 2014 World Cup. He unfortunately missed out on the starting line-up for Euro 2016 and 2018 World Cup due to his involvement in a scandal during 2015. As a consequence, to this, he was suspended from competing with the French national team.

However, during his time with the France squad he had an impressive run as he capped 81 times in total and scored 27 goals across his senior career from 2007 to 2015.

In this section of the post we are going to look at Karim’s performance in both his club and international fixtures. Below we have broken down his stint with each team and how many appearances and goals he made during his stay:

Next, we are going to acknowledge the individual awards acquired by Karim Benzema across his long-standing career:

Do You Think Benzema is an Effective Striker?

In this post we have covered the youth and senior career of Karim Benzema which stretches across over two and a half decades. But now we want to know your thoughts on Benzema, do you think he is an effective player? Let us know over on our social media pages today. And don’t forget that you can purchase the Real Madrid home shirt within our online store – Soccer Box and pledge your allegiance to Benzema and the club now!