Launch Of The New Real Madrid Home Shirt Made By Adidas 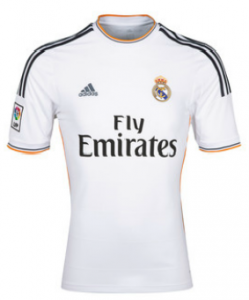 The official launch of the Real Madrid home shirt has taken place today. The Spanish giants revealed the new design of their 2013-14 shirts and kits. The new shirt is very diverse to last year's shirt designed by Adidas. Last year's shirt stood out with its big bold black outlines around the collar and sleeve areas, these matches up with the large BWIN shirt sponsor which was centre in big dark text. The new Real Madrid shirt has taken on a new style; it has much more of a lighter design to it. The famous Adidas three stripes which appeared black on the 2012-13 home shirt are now a grey colour which lightens the shirt up quite a lot.

The orange details on the shirt certainly add a great touch to the home shirt, they are situated on the collar area of the shirt and the end of the sleeves, and these trims look extremely stylish. Another change is the collar; last year's was a V-neck now the style has changed to a modernised crew neck. Manufacturers, Adidas have their branding logo embroidered on to the right side of the shirt alongside the Real Madrid club badge. This year the Madrid first team will be sporting the shirt with its new look sponsor also. Madrid has moved away from BWIN and are now being sponsored by Fly Emirates, Arsenal's long standing shirt sponsor. Other teams who are sponsored by the airline company include Paris Saint Germain, AC Milan, Hamburg and Olympiakos.

The airline company offered $26.7 million to be featured on the front of the Real Madrid shirt. It is hardly surprising that they have targeted Madrid as a sponsor. The Spanish club have played brilliantly all season,Â  a lot of the previous limelight has been all Barcelona and even though Barca won the league Real Madrid have received the majority of positive press. The likes of Ozil, Ronaldo, Alonso and Modric have played fantastically throughout the season and I am sure we will be seeing some of these players in the 2014 World Cup next year.

It will be interesting to see if Real Madrid keep up their good form once Jose Mourinho leaves. The former Chelsea manager has been boss at Madrid for three years now but he will be leaving in the summer and starting at a new club in the 13-14 seasons. Many Chelsea fans wish him to go back to Stamford Bridge and Mourinho has even hinted that he will return one day but with the history between Mourinho and Roman Abromovich we are not sure this will happen and if it does will it run smoothly?

What are your thoughts on the new Real Madrid Shirt? Where do you think Mourinho will head next?

Let us know your thoughts;